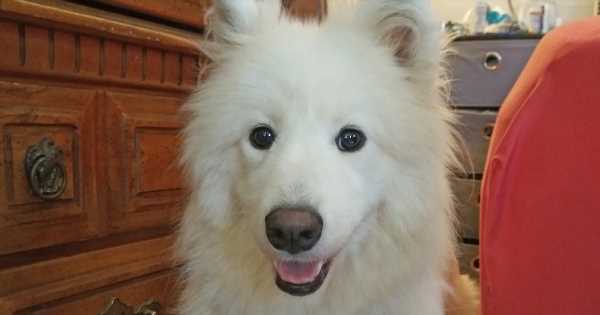 When a young Samoyed named Nova entered the ASPCA Behavioral Rehabilitation Center (BRC) in December 2018, she was extremely fearful and withdrawn, making adoption unviable at the time. With limited options for placement, Nova needed serious help. But six months later, Nova proved her resilience as well as her true, loving nature when she became the 100th dog to graduate from the BRC since it officially opened.

A Dark Past but a Bright Future

Originally known as Dark Star, Nova was one of over 150 Samoyeds rescued from an Iowa puppy mill on November 12, 2018, by the Worth County Sheriff’s Office and the ASPCA. She and her canine counterparts had been living in overcrowded, filthy conditions in below-freezing temperatures. 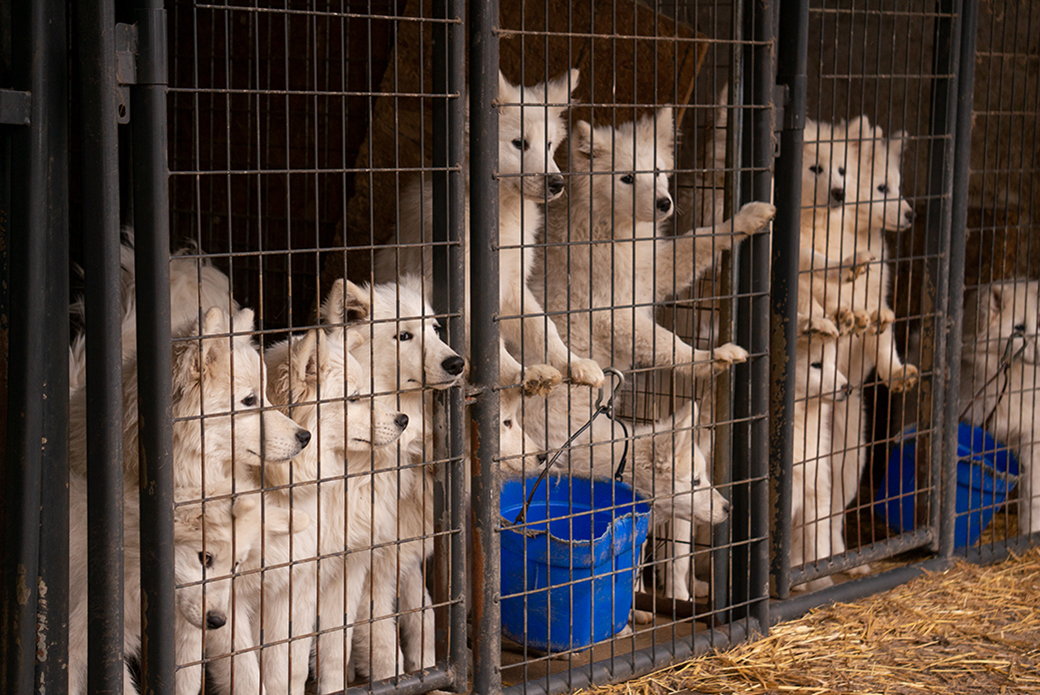 Samoyeds in a kennel from the scene in Iowa.

Following their rescue, the dogs were relocated to a temporary shelter where they were cared for by ASPCA responders until they could be placed with shelters and rescue groups across the country.

Nova’s owner was later found guilty of 14 counts of animal neglect and sentenced to two years of unsupervised probation with 420 days in jail suspended. She is prohibited from owning and breeding any dogs.

While some of the dogs were soon put up for adoption, Nova and some of her kennel-mates just weren’t ready. Anxious and terrified, they were transported to the BRC in Weaverville, North Carolina.

Opened officially in May 2018, the BRC is the first-ever permanent facility dedicated to the study and rehabilitation of extremely fearful homeless dogs, most of whom are victims of cruelty or neglect. The facility uses cutting-edge techniques to treat traumatized dogs and serves as a training center to help animal shelters around the country develop and improve their own behavioral rehabilitation programs.

In Nova’s first few weeks at the BRC, she urinated when anyone approached her kennel and fled when leashed. She was unable to function normally without the presence of another dog—initially, only other Samoyeds—and was placed on anti-anxiety medication to help alleviate her stress. It took staff several months of work to get her more comfortable with handling.

With time, Nova’s confidence increased, according to Pia Silvani, former Director of Behavioral Rehabilitation at the BRC. She learned to play with other dogs and with people when other dogs were present.

“Eventually, we saw her true personality come out,” Pia says.  Soon after, it was time for Nova to begin her next journey—finding

On June 6, Nova was transferred to Asheville Humane Society, which had already taken in—and placed—nine other BRC graduates.

After just four days, Nova caught the attention of a couple who were seeking a companion for their dog.

“Jon noticed Nova in the window of the humane society—she was the featured dog of the day—and was instantly smitten,” explains May T.

“They felt it was meant to be,” says Asheville Humane Society Adoption Counselor Tina Miller, noting that May and Jon were kind and patient with Nova, who sniffed the couple during their outdoor meet-and-greet before darting away to chase a butterfly.

Asheville Humane Society staff explained that Nova needed to go to a home with a very social and confident dog. Jon and May’s outgoing dog Molly, an eight-year-old rescued Beagle/Basset Hound-mix, fit the bill perfectly. They also have another dog, Heartly, a mixed-breed who once belonged to Jon’s parents. 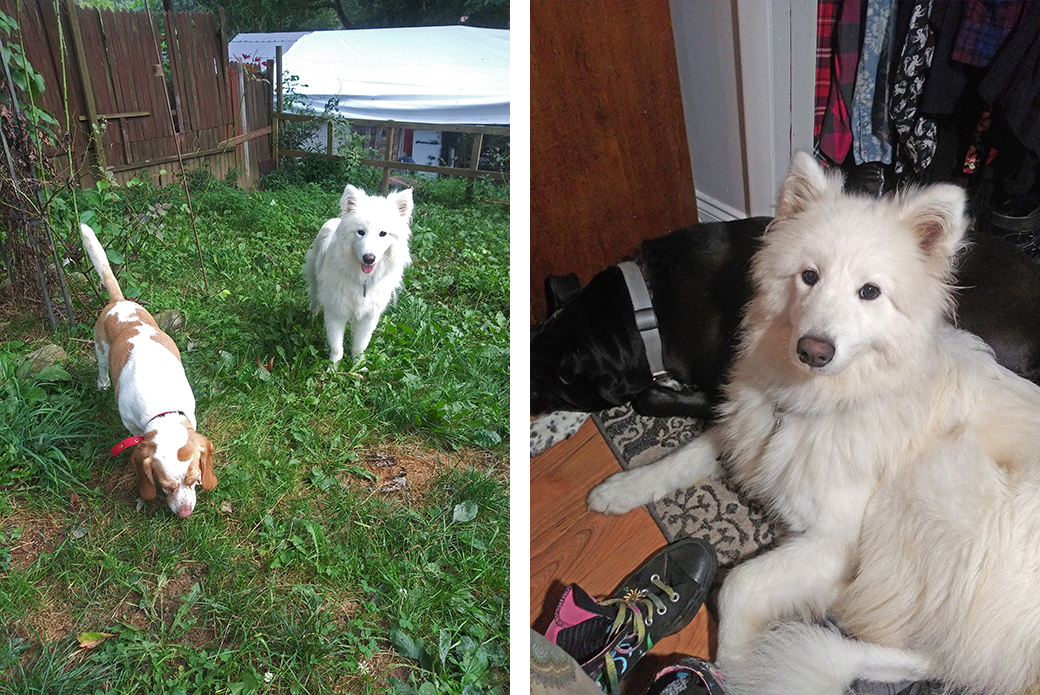 “It’s inspiring to see people willing to adopt a fearful dog and commit to working with them while providing them a safe, happy life,” says Sydney Bartson, Adoption Program Manager and Interim Behavior Manager at Asheville Humane Society.

After a month in her new home, being around other dogs has had a positive impact on Nova—and vice versa.

“We were excited we could get another companion for Molly,” says May, who reports that Molly is good at getting Nova to go outside and come out of her shell. “Molly has a purpose. And watching how Jon and I interact with the other dogs has helped Nova establish trust.”

May says Nova’s increased confidence enables her to approach their two housemates and neighbors. “Having other people around, who are doing their own things, has been good for Nova because she realizes that people can still be in her space and not be scary. She spends way less time today with her tail tucked between her legs.”

Though not fully housebroken yet, Nova responds well to treats and will sit for food. May and Jon have also contacted a dog behaviorist to improve their communication skills with Nova.

“She’s obviously really smart,” says May, who admits she wasn’t a dog person until a friend of hers rescued Molly. Her two cats—Leo and Kitty—are dog-friendly.

Watching Nova run circles around their backyard is a “joyful experience,” says Jon. “It’s totally worth it to see her so happy.” 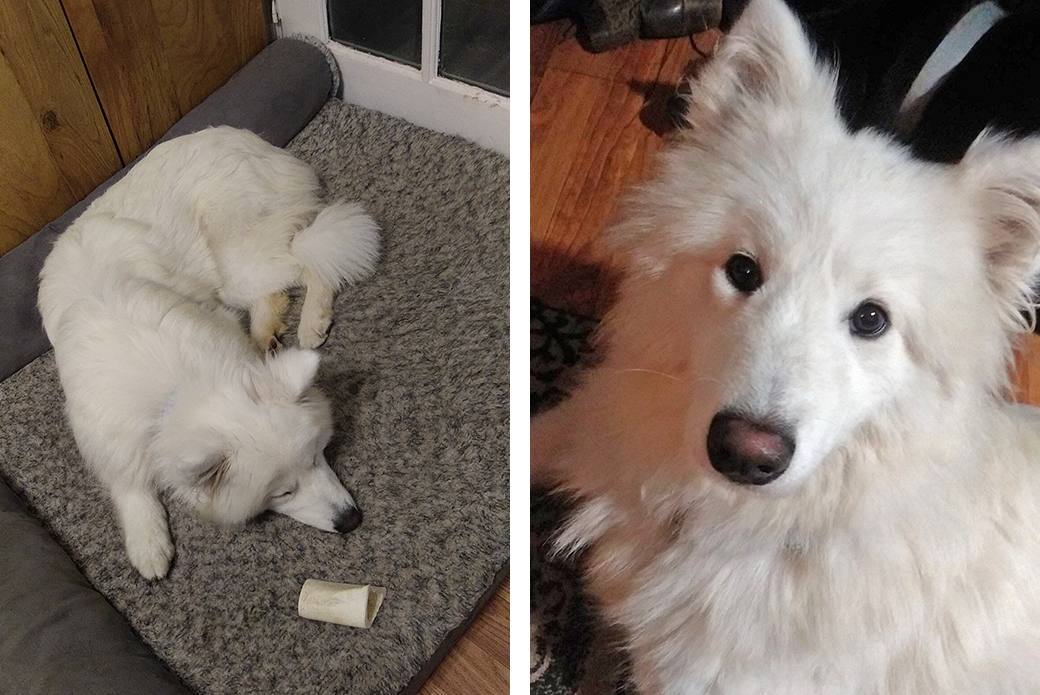 Jon and May recently discovered that when they leave the house, Nova would drag their socks from the laundry into the living room.

“That was really gratifying—like she was comforted by our scent,” says May, who has since purchased sock-like toys as a substitute that Nova enjoys even more. “To us, that was a sign of affection.”

“She’s really come a long way,” adds May, who chose the name Nova to symbolize how the once-shy dog has developed into a shining star with a sparkling personality.

And whether known by that name or as BRC Graduate number 100, Nova’s future is looking brighter than ever.