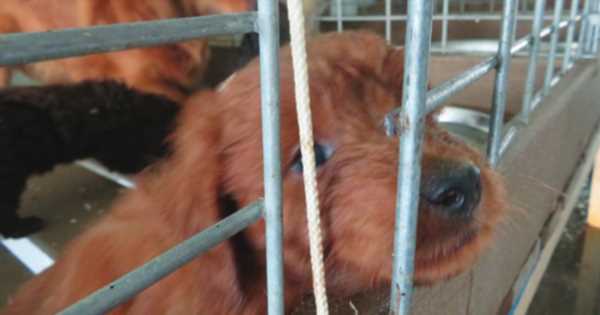 In November, the ASPCA assisted with the rescue of more than 500 hundred dogs from a U.S. Department of Agriculture (USDA)-licensed commercial dog breeding facility in Iowa. The breeding facility was owned by Daniel Gingerich and was licensed by the USDA in 2019, but the agency didn’t inspect his facility until 2021. When the USDA finally inspected the facility, they found many animals suffering: dogs hidden from inspectors, ongoing disease outbreaks like parvovirus and distemper, heat distress, lack of water and food, dead and dying dogs–over 200 violation of the Animal Welfare Act in total. Dogs were sick and dying on the USDA’s watch.

Documents filed with the state of Florida show that nearly 40% of Florida’s puppy-selling stores imported dogs from Gingerich’s puppy mill in Iowa.

Florida has one of the country’s highest number of puppy-selling pet stores, which often source puppies from out-of-state, cruel, commercial breeding facilities like Gingerich’s (also known as puppy mills), where dogs are bred at every opportunity in order to produce as many puppies as possible with minimal care provided to the dogs to maximize puppy mill profit.

Shut Down the Pipeline

Puppy-selling stores are the driver that keeps the puppy mill pipeline going. The time is now to shut down the pipeline that is importing cruelty into the Sunshine State.

Florida Residents–you can take action TODAY! Contact your state legislators today using our online form and urge them to oppose House Bill 849/Senate Bill 994. H.B. 849 and S.B. 994 are designed to allow puppy-selling pet stores in Florida to continue sourcing from these inhumane, commercial breeding facilities and strip cities and counties in Florida of their power to meaningfully address this issue. We can’t let this happen.

Don’t live in Florida? Join the ASPCA Advocacy Brigade to be notified when important animal-related legislation is introduced in your area!