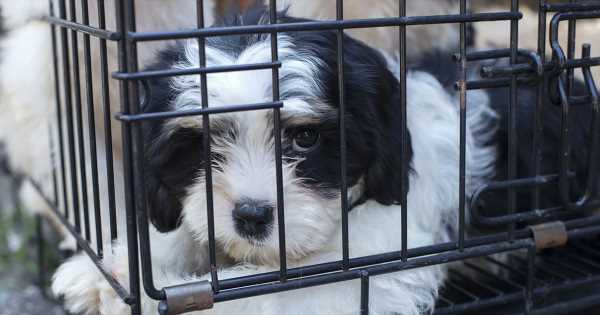 An investigation by the Office of Attorney General found that Shake A Paw sold puppies with serious illnesses–some puppies even passed away within days or weeks of purchase. The investigation also uncovered puppies suffering from serious illnesses and congenital defects and puppies who displayed visible signs of illness, even though they received certificates of health signed by Shake A Paw-contracted veterinarians.

Though Shake A Paw claims they do not buy animals from puppy mills, puppy import records show otherwise, and like other puppy-selling pet stores throughout the U.S., Shake A Paw buys puppies from out-of-state commercial breeding facilities where dogs are often kept in cruel, inhumane conditions.

Records also show Shake A Paw was shipping puppies from Daniel Gingrich–the same commercial breeder from Iowa who was recently forced to surrender over 500 dogs after the U.S. Department of Agriculture documented more than 200 violations of the Animal Welfare Act and legal action was taken by the U.S. Department of Justice.

Based on documents filed with New York State, more than one-third of New York’s puppy-selling pet stores, including the Shake A Paw stores, imported puppies from Gingerich–all to be sold to unsuspecting families.

“New York State has one of the country’s highest number of puppy-selling pet stores, which sell puppies from out-of-state, commercial breeding facilities—known as puppy mills—where puppies are cruelly bred without regard for their health or well-being,” said Matt Bershadker, ASPCA president and CEO. “Every year, thousands of these puppies are marketed in New York pet stores as healthy dogs from responsible breeders, which is far from the truth. We are grateful to Attorney General Tish James for taking decisive and compassionate action to shut down this pipeline to protect both animals and consumers.”

No matter what state you are in, stay up-to-date on the Puppy Mill Pipeline Bill and receive alerts when it’s time to take action by joining our Advocacy Brigade. And, learn how you can avoid the cruelty of puppy mills!