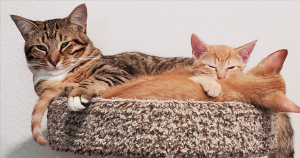 Over the past three years, Andrea C. has fostered nearly 60 kittens for the ASPCA in Los Angeles. This year, her one-year-old male tabby named Ziggy is lending a paternal paw.

In mid-March, as cities began their “stay-at-home” orders due to the COVID-19 pandemic, Andrea took in a pair of kittens—sisters she named Tangerine and Marmalade. Ziggy responded by grooming and nurturing the new pair. 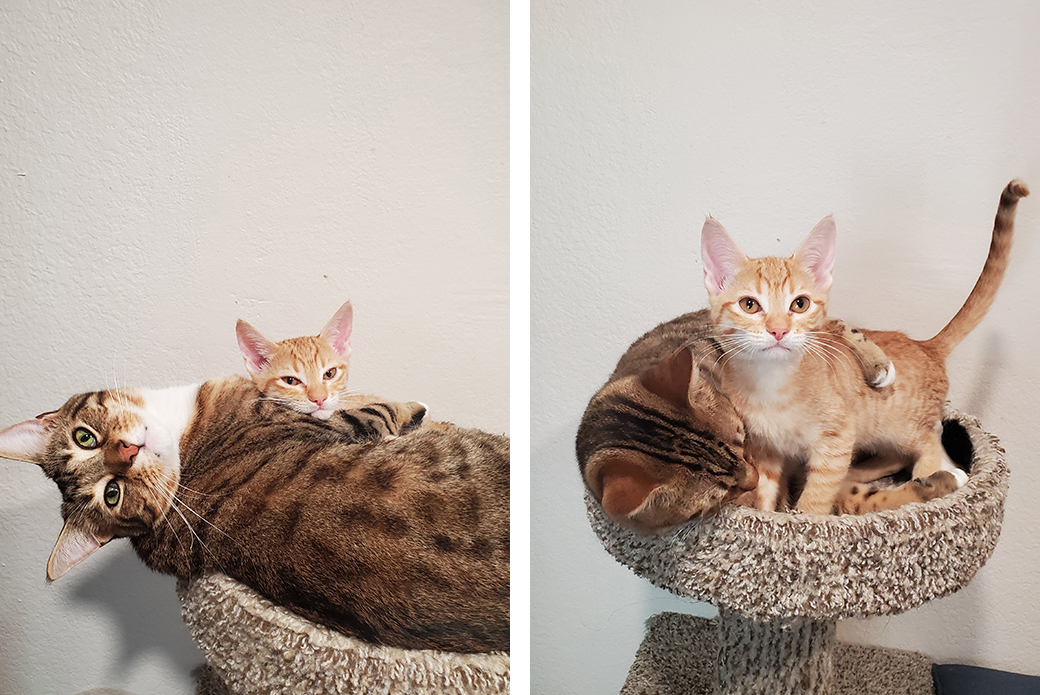 Ziggy has taken on this fatherly role for kittens ever since Andrea fostered him last summer.

Ziggy was initially a foster cat, but Andrea quickly realized that he was meant to be part of the family. He joined her resident cats Echo, Carson and Shadow.

“Ziggy was starting to bond with my own cats,” says Andrea. “I didn’t have the heart to separate them; he fit in with our family so well.”

Ziggy learned his parenting skills from these kitties who helped care for Ziggy last year, when he was a baby.

“Carson was Ziggy’s cat daddy,” Andrea explains. “He set such a good example. In fact, all three male cats are incredibly nurturing.”

“We’ve seen a very small number of male cats who take on this role, but it’s unusual,” says Tina Reddington, Director of the ASPCA L.A. Volunteer and Kitten Programs.

“Usually, my foster kittens bond with me first,” says Andrea. “I do a lot of hands on care, like socializing and handling. With Ziggy, I was curious to see how he would respond to my new fosters, Tangerine and Marmalade. I thought he might play rough. But he was so good with them.” 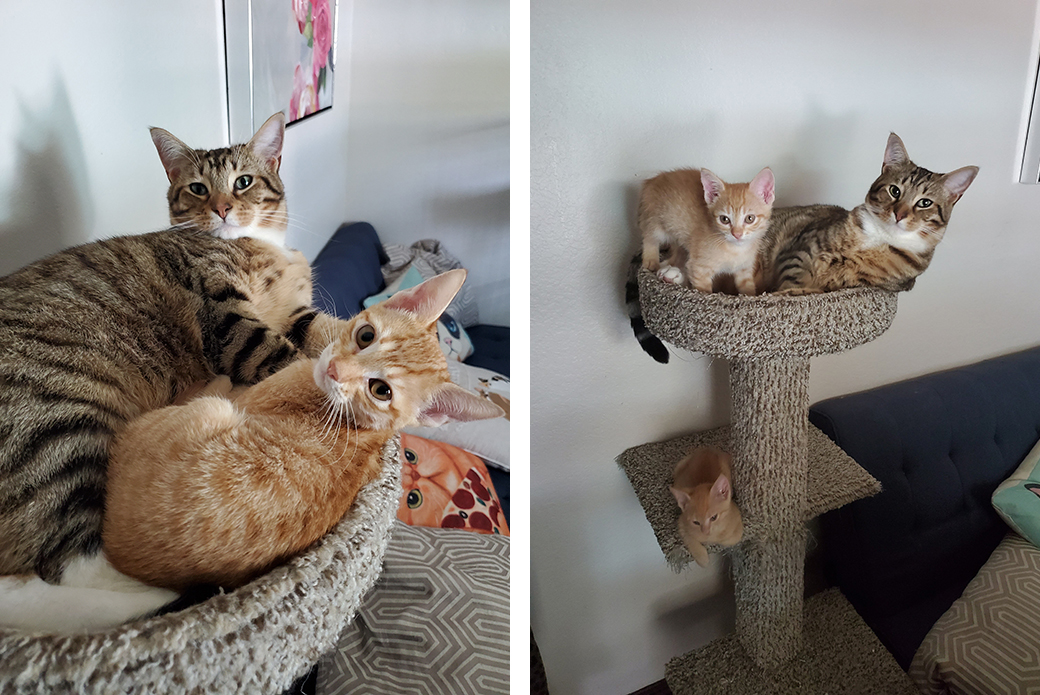 Andrea learned about the ASPCA Foster Program when she fostered kittens for another organization whose program ended.

“I enjoy the work and it is really rewarding,” says Andrea. “Since I was two, I’ve always been crazy about cats. And kittens, they’re so darn cute.”

The ASPCA arranges fostering for kittens aged four-to-eight weeks as part of its Pee Wee program. These vulnerable kittens are often too young to survive in a shelter environment and require foster homes for care to grow and thrive.

Today, the program provides care for kittens and cats ranging from newborns to adults, including under socialized and un-weaned kittens, queens and shy adults.

Of the more than 5,600 cats and kittens originating over the past three years from L.A. County shelters—primarily the high-volume Baldwin Park and Downey Animal Care Centers—4,629 have been placed in foster homes and the rest went to Petco and shelter placement partners—including Pasadena Humane Society and Irvine Animal Care Center—to be put up for adoption. 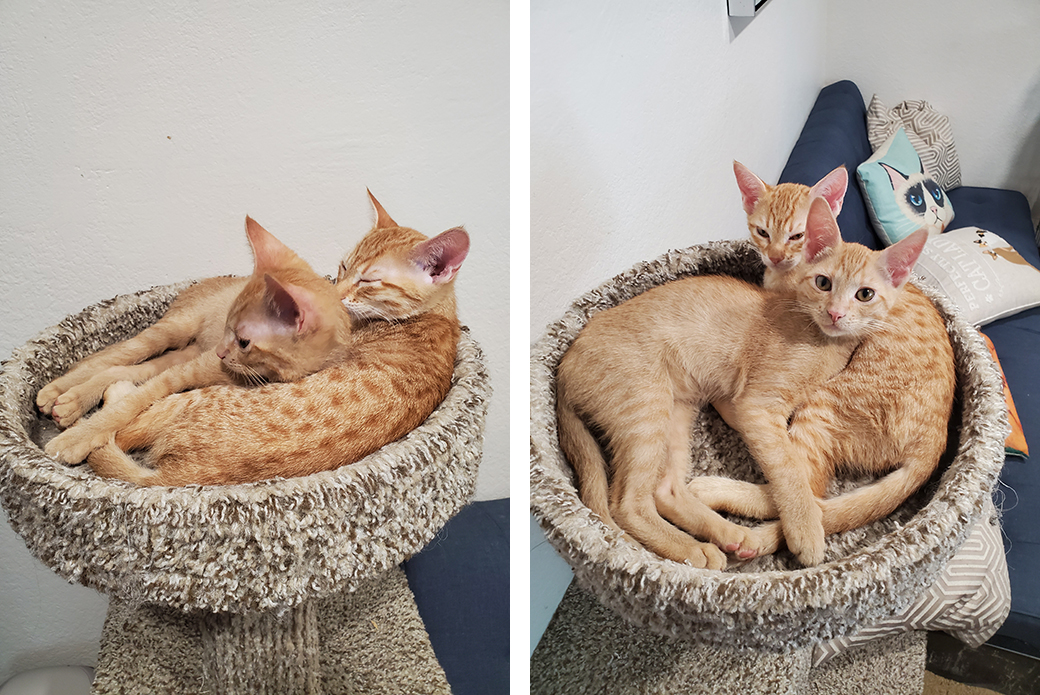 As in Ziggy’s case, fostering also has other benefits—some caregivers fall in love and adopt their temporary houseguests.

Through social media, Andrea places many of her foster kittens in adoptive homes.

“Everyone knows I have kittens,” she says. “Getting to know them—which ones are outgoing, which ones aren’t, who’s confident and who’s shy—really helps match them to the right adopter.”

Thanks to Andrea, Tangerine and Marmalade recently found a home together with experienced cat owners, The McClure family, including children Joseph, Hailey and Abigail. Andrea interviewed the family on Zoom through our remote adoptions and minimal-contact protocols and personally delivered “her two orange girls” on May 15.

“The COVID-19 pandemic increased our number of foster caregivers because more people are at home, and those who couldn’t foster before are now giving it a try,” said Nadia Oseguera, ASPCA Manager of Foster Care in Los Angeles. “Ultimately, people realize that fostering kittens and cats is not as intimidating, time-consuming or difficult as it may seem. 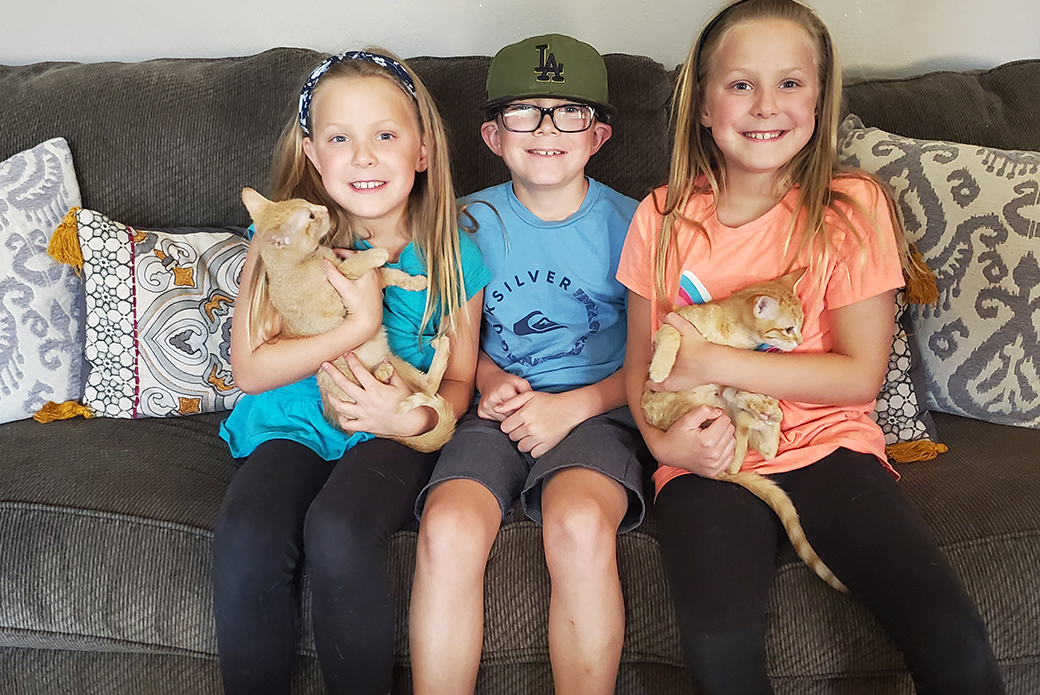 “It’s so exciting to see them go on to a home,” she said. “My favorite part is when I put the kitten into a child’s hands and witness the reaction on that child’s face. I get goosebumps.”

Meanwhile, Ziggy is ready and waiting for when his feline fathering instincts are called on again.