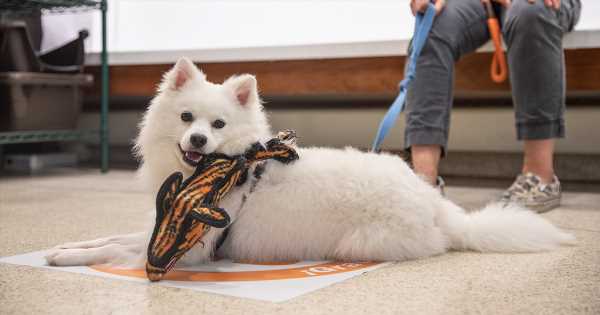 On June 18, NYPD Officer Aruna Maharaj and fellow police officers responded to a call about a dog locked in a car on a hot day.

When the officers came upon the car, which was parked on a Manhattan street, they saw a two-year-old American Eskimo Dog named Snow trapped inside. The windows were shut, and outside temperatures hovered in the mid-80s.

“When we first saw Snow in the car, we were very concerned,” says Officer Maharaj. “He was distressed and seemed to be looking for an escape. We weren’t sure exactly how long he had been in there.”

After breaking the car’s front passenger window, officers unlocked the car and pulled Snow from the back seat. In a tweet, the 19th Precinct shared a video of the rescue. 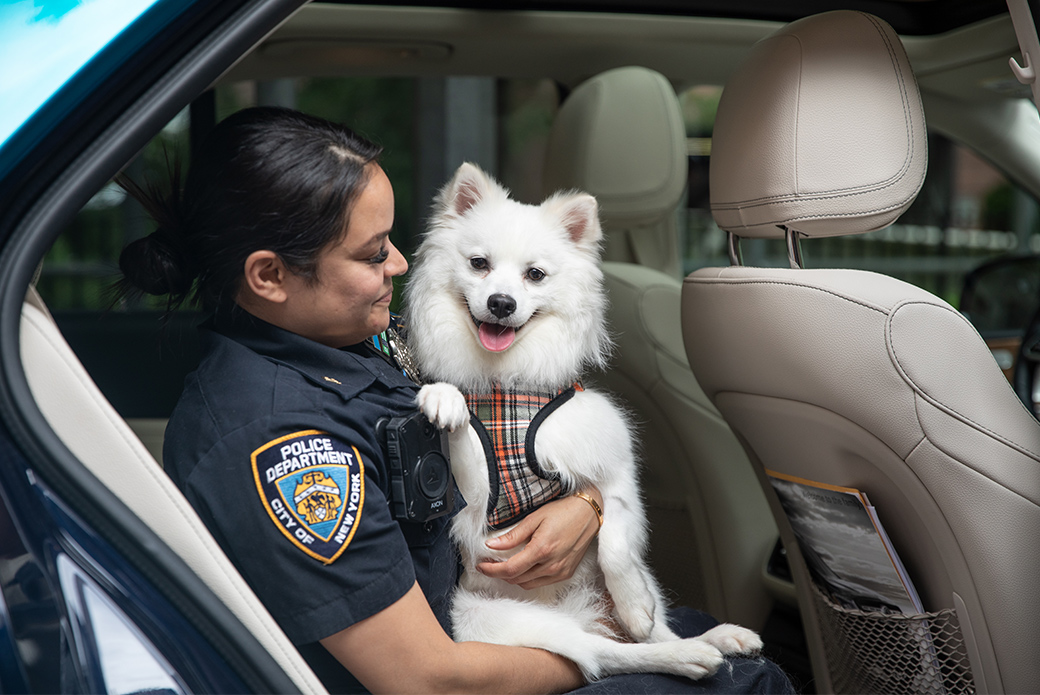 Officer Maharaj took Snow into her vehicle and blasted the air conditioner. He licked her face and sat on her lap, panting.

Officers took Snow to Animal Care Centers of NYC, where he stayed for two days until being transferred to the ASPCA on June 20.

Luckily for Snow, by the time he arrived at the ASPCA, his blood work and organ function were normal, according to Dr. Laura Niestat, a Forensic Veterinarian who examined Snow. She says his story is a good reminder to the public how heat and heat-related illness can threaten the lives of pets. 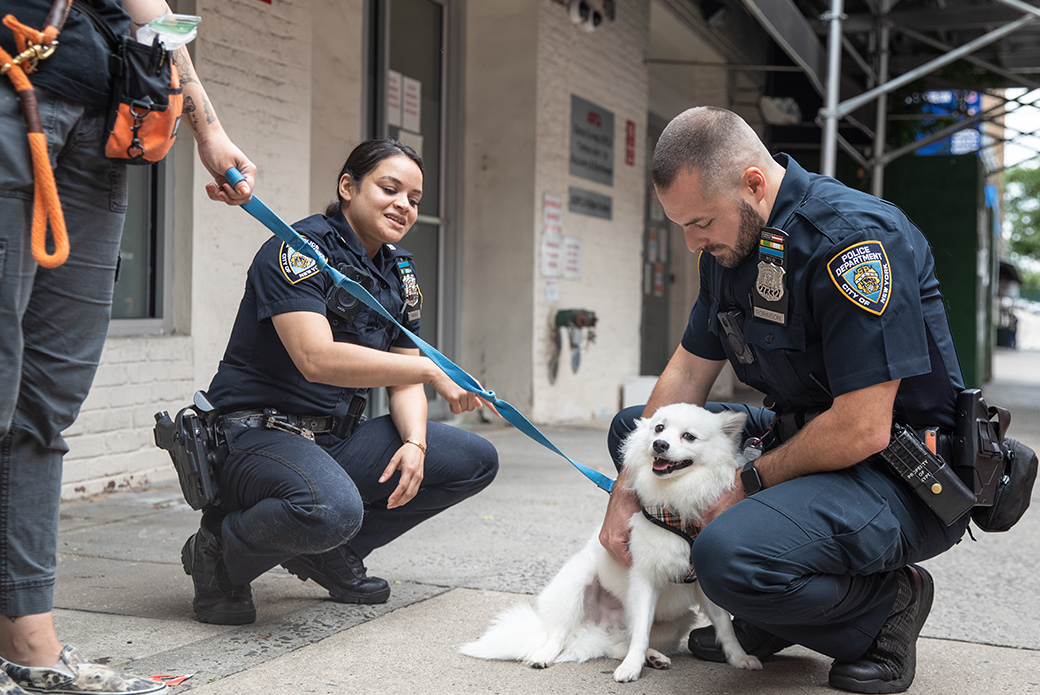 “It is hopefully common knowledge that leaving a dog in a locked car is dangerous,” says Dr. Niestat, noting that heat-related illness is indicated by a range of symptoms including panting, agitation, lethargy, vomiting, diarrhea, kidney failure, neurologic dysfunction, seizures and death.

Knowing When Things Get Too Hot

“Heatstroke is a completely preventable life-threatening emergency,” says Dr. Aubrey Crowley, a veterinarian and Medical Supervisor in the ASPCA Animal Recovery Center (ARC), where Snow remained for 10 days. “While heatstroke can happen anywhere, cars are especially dangerous. Cracking windows or parking in the shade is not enough to make the temperature inside a parked car safe for any dog.”

Dr. Sarah Mantovani, Medical Supervisor at the ASPCA Canine Annex for Recovery and Enrichment (CARE)—where Snow remained until the end of his stay—cautions owners not to make assumptions about the temperature inside a car based on the temperature outside it.

“When the temperature outside is 70 degrees—seemingly benign—the inside of a locked car can reach 104 degrees in 30 minutes; on an 85-degree day, it takes only 10 minutes,” she says, citing data on the website of the AVMA.

“Dogs cool themselves very differently than humans by panting and moving air across their tongues. If the temperature inside is restricted and hot, then there’s no possible way for dogs to keep their body temperature down.” 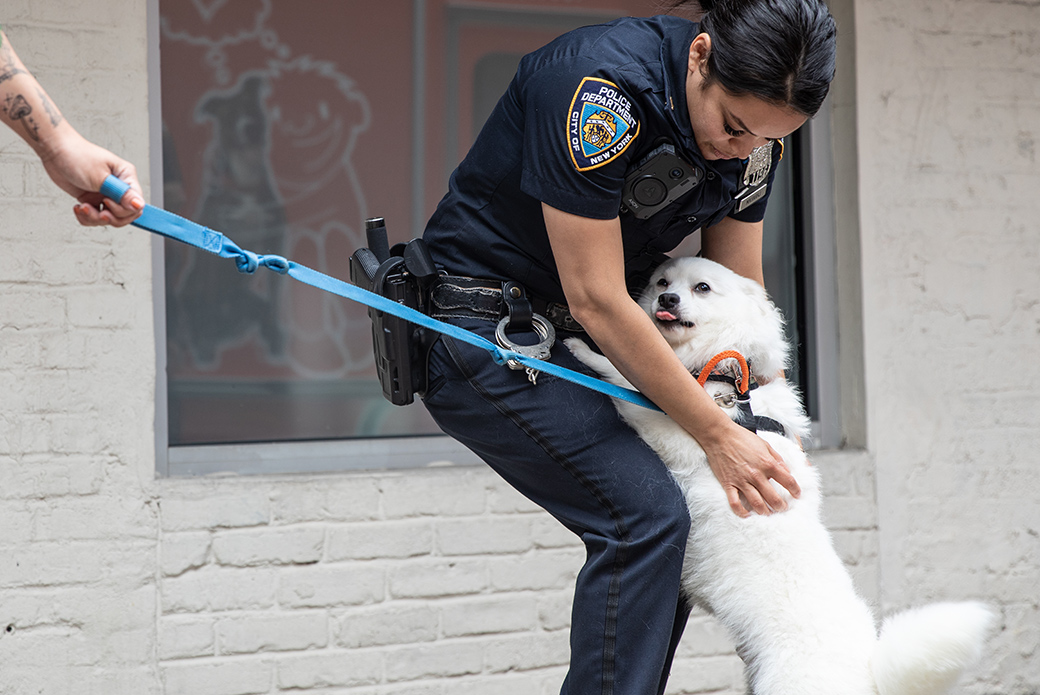 “While an animal’s heat tolerance and chance of developing heat-related illness may vary based on its breed, size, age, hydration and overall health, I go by the rule that if it feels hot to you, it feels hot to your pet,” she says. “Animals exposed to extreme heat can even appear okay, but they should be assessed by a veterinarian as soon as possible.”

By the same token, cold cars can also pose a significant risk to a pet’s health.

“In cold temperatures, a car can rapidly chill your pet,” says Dr. Niestat. “Pets that are young, old, ill or thin are particularly susceptible to cold environments and should never be left in cold cars. Never your pet unattended in a vehicle—in hot or cold temperatures.” 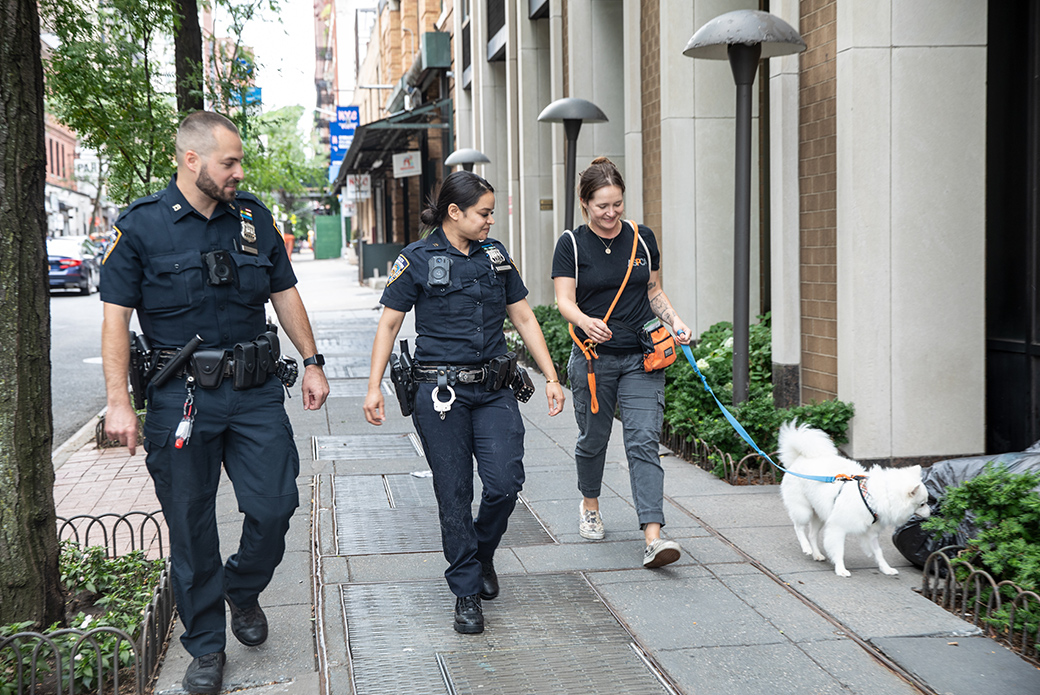 While at the ASPCA, Snow also received vaccinations, routine deworming and was neutered. Meanwhile, the NYPD arrested a 26-year-old man and charged him with animal cruelty. The defendant pled guilty to a violation for his conduct and his sentence included a fine, community service and a court order prohibiting him from possessing or caring for animals for five years. 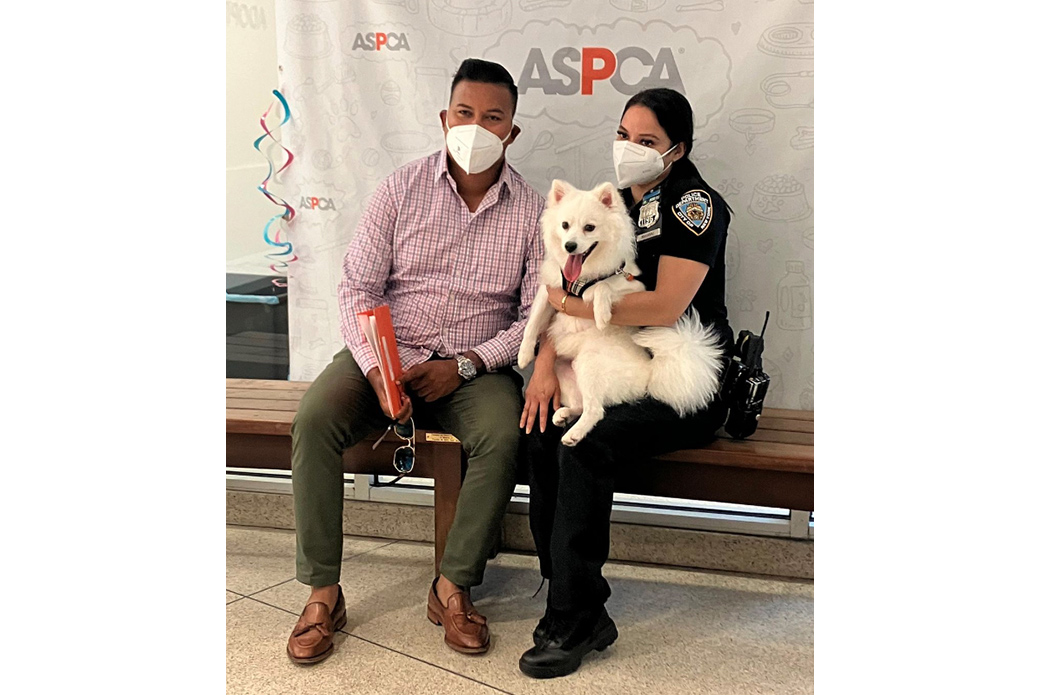 As the ASPCA focused Snow’s care, Officer Maharaj remained in touch. And though she hadn’t planned on adopting a pet, when she responded to Snow’s case, Officer Maharaj couldn’t bring herself to say goodbye. On July 26, she and her fiancé adopted Snow.

Officer Maharaj reports that Snow has adjusted well to his new home in Nassau County.

“He gets long walks at the nearby marina, which he loves,” she says, adding that Snow also enjoys playing with the family’s two-year-old cat named Katie. 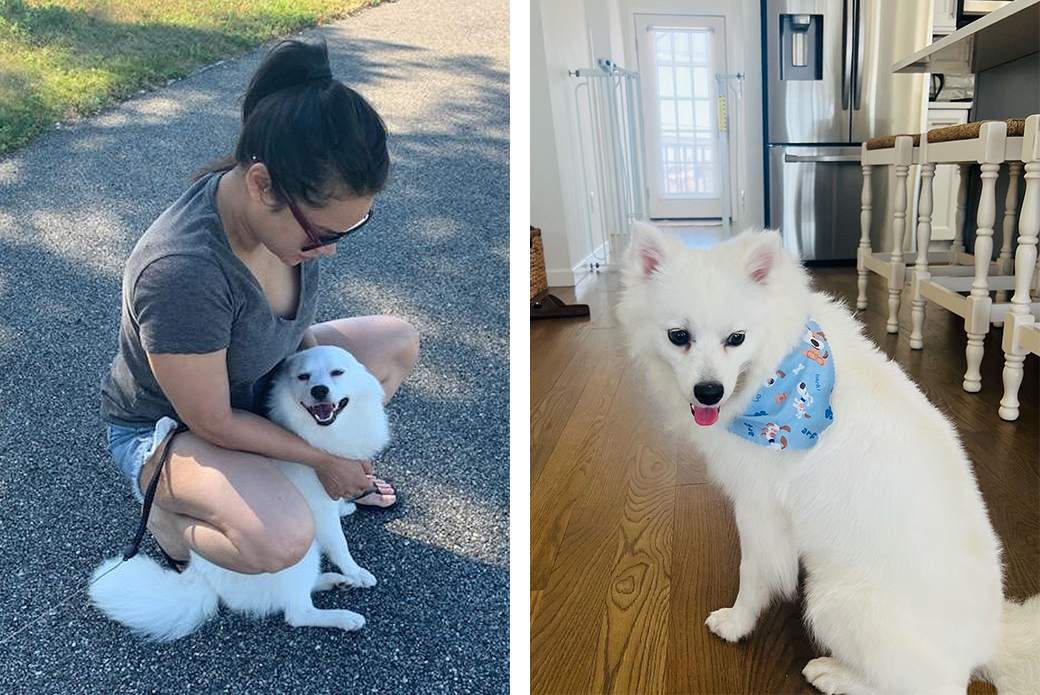 “They both love playing in the backyard together,” says Officer Maharaj.  “When Snow is relaxed, he loves to snuggle on my lap or near my feet with a favorite toy. He loves being around people and is curious. And he always seems to have a smile on his face.” 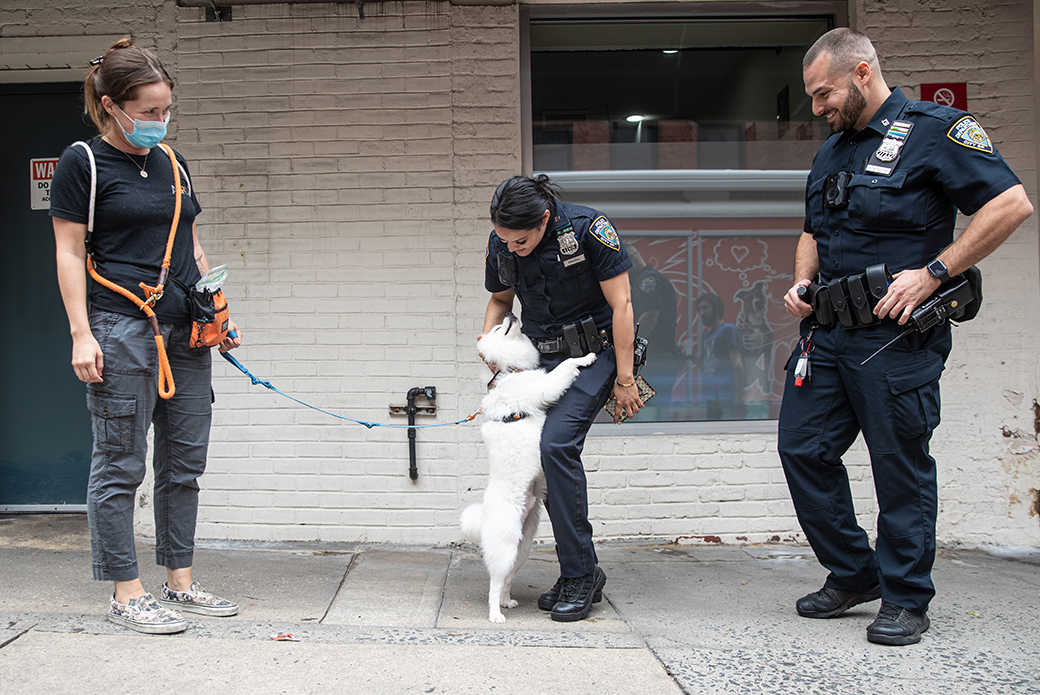 “When we saved him, he licked my face in appreciation,” says Officer Maharaj. “That’s when I knew I wanted to take him home with me.”

On November 15, Officers Maharaj and James Robinson were among 20 professionals in the NYPD, veterinary field and prosecutors’ offices who received ASPCA Appreciation Awards for the critical roles they played in the enforcement, investigation and prosecution of animal cruelty and neglect cases. In August, both officers—who are the Neighborhood Coordination Officers near the ASPCA Adoption Center and Animal Hospital—arrested a man who was videotaped beating his dog. The ASPCA is grateful to all the award recipients for their unwavering dedication to the care and safety of animals across New York City.