In March 2021, Sharon and Dale N.’s beloved dog, Sitka, a 15-year-old collie-mix, died as a result of osteosarcoma, a form of cancer that originates in bone-forming cells. Heartbroken, the couple waited a year before deciding to adopt again.

In January, a friend suggested they visit the Nebraska Humane Society. After looking online, Sharon and Dale—both 81—visited the shelter in person.

A shelter worker there told them, “I know just the dog for you: Butters.”

“We were skeptical about adopting her, but we decided she needed a good home,” Sharon says.

They adopted Butters on January 13.

On July 31, 2021, Butters was one of 81 dogs rescued by the ASPCA from an alleged interstate dogfighting ring across Long Island, New York City and several nearby states. More than 10 people were subsequently arrested. The Suffolk County Acting Police Commissioner, Stuart Cameron, called the case one of the most disturbing he had witnessed in his 36 years with the department.

Many of the dogs, including Butters, were transported to the ASPCA Cruelty Recovery Center (CRC) in Ohio, where they spent several months recovering and receiving care. 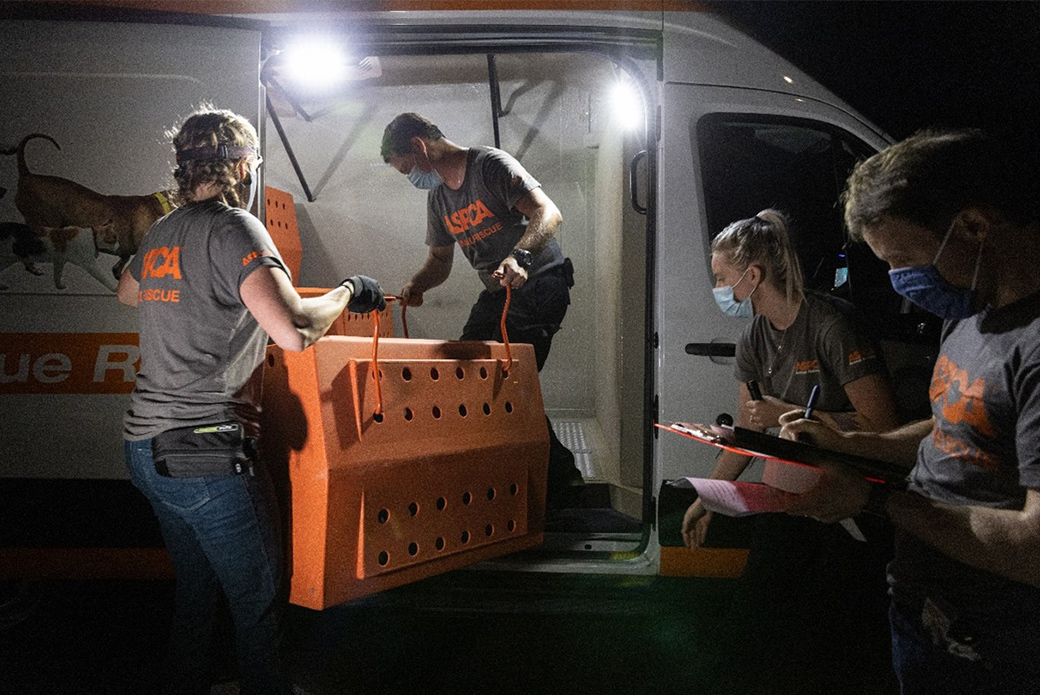 Butters suffered from leg problems that left her intermittently lame, according to Mary Sarah Fairweather, Vice President of the CRC. Staff at the CRC slowly increased Butters’ activity and exercise.

“She seemed to improve over time as she built muscle mass,” says Dr. Laurie Millward, Senior Director of Veterinary Services at the CRC. “After her transfer to Nebraska Humane Society on November 5, an orthopedic surgeon took a second look and determined that based on her improvement and lack of lameness, she did not need surgery anymore.” 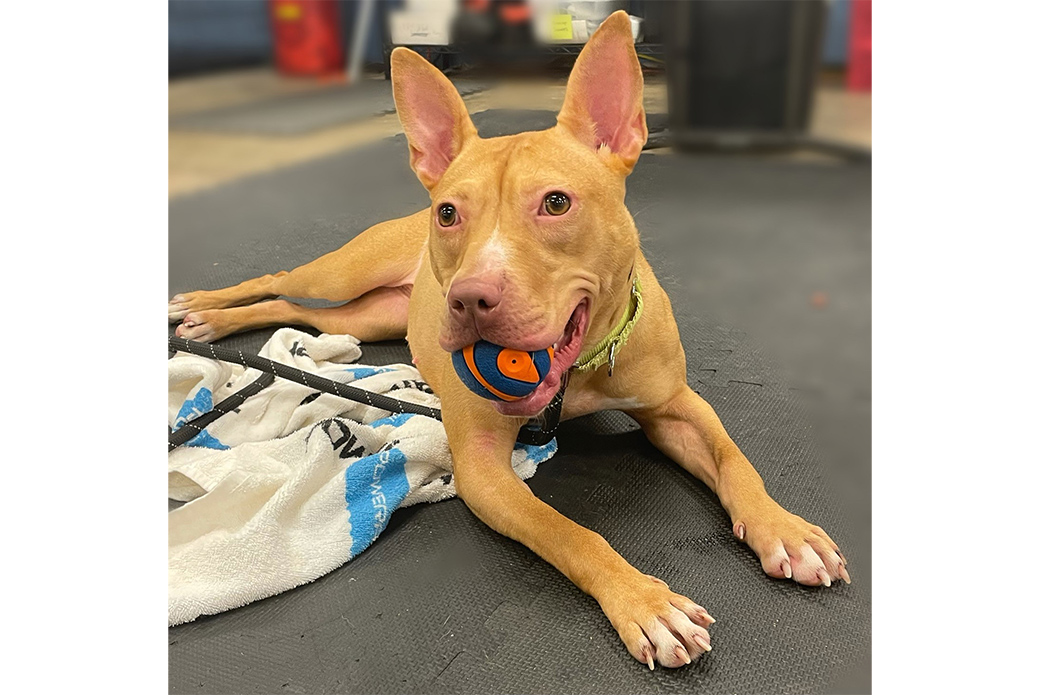 Butters was “great in playgroups with other dogs,” according to Pamela Reid, Vice President of the ASPCA Behavioral Sciences Team.

Butters was fostered through a collaboration between the Nebraska Humane Society and Omaha Corrections Center.

Butters’ caregiver at the corrections center, Tony, says the key to building a trusting relationship with Butters was patience.

“She was scared of the sky outside, not used to grass, and didn’t know how to navigate stairs,” says Tony, who has also worked with puppy mill victims. “But helping her learn how to live in this environment was a pleasure. If you are consistently kind, she will give back all the love you pour into her.”

Two weeks after her adoption by Sharon and Dale, Butters began showing signs of trust and comfort.

“She got used to us and our routine,” says Sharon. “She goes to bed when we do and sleeps until we wake up the next morning.”

Renamed Maggie, the 35 lb. pooch sits for treats and loves attention. She also gets a daily dose of the supplement glucosamine for her hips and joints. 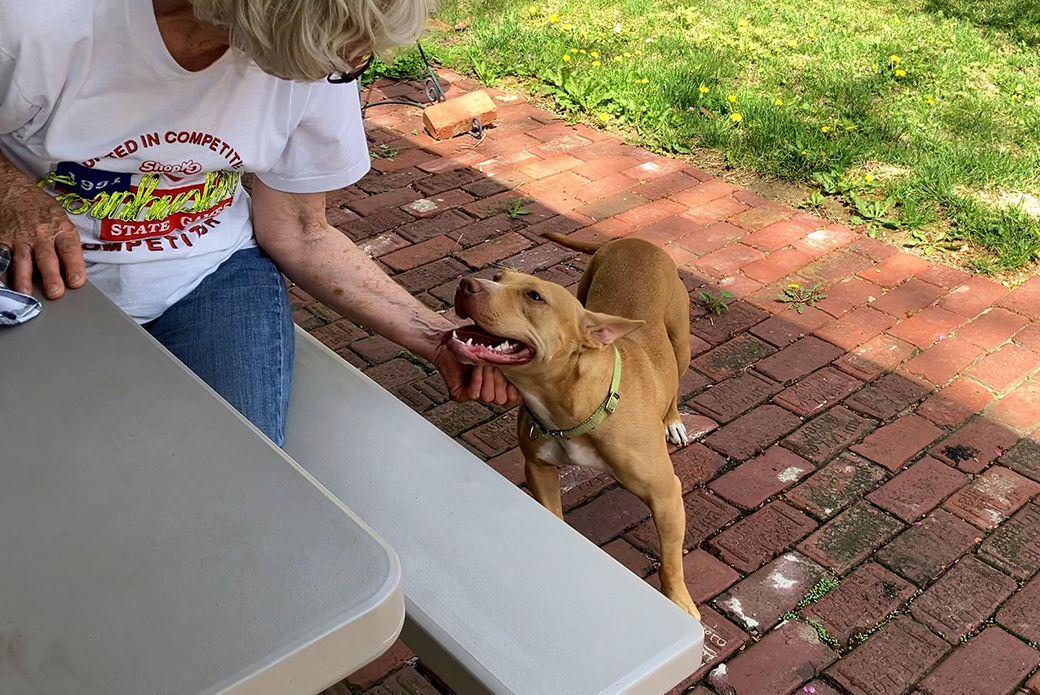 “She’s warmed up now, let me tell you!” Sharon says. “She’s a very cute dog—mostly legs and ears. And she knows “sit, down, get your ball and go to your bed.”

Sharon says Maggie looks forward to visits from a pharmacy delivery man who brings Maggie dog treats on his route. 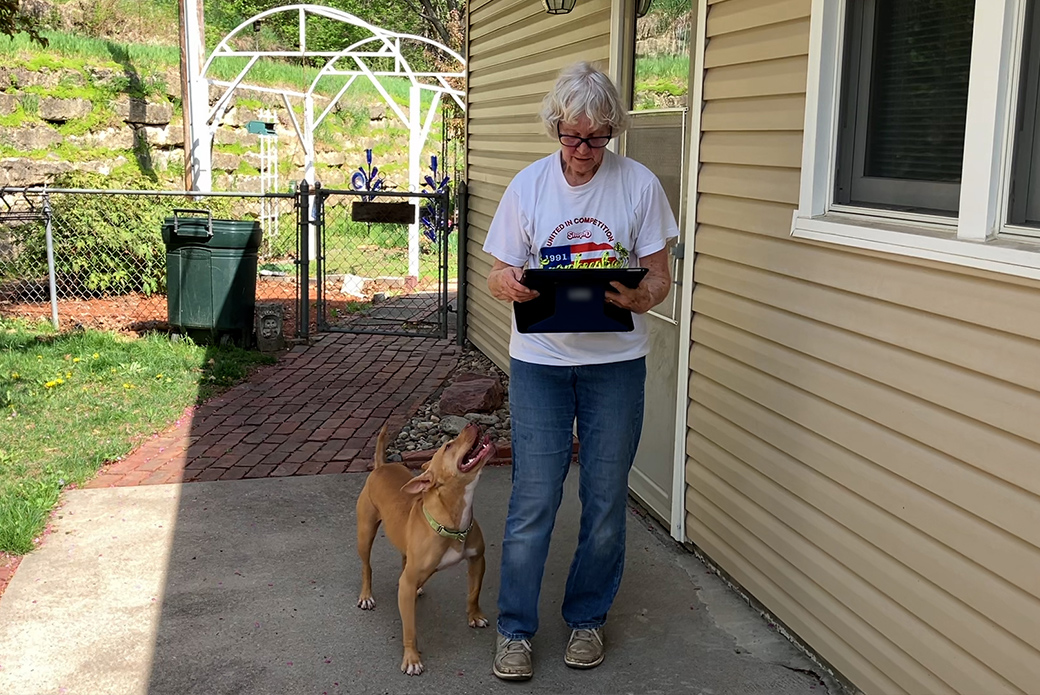 “She’s also good about letting you know she needs attention,” Sharon adds. “She stands at the door when she needs to go out.”

Maggie prefers Dale when she wants to sleep or cuddle and curls up in her own loveseat when not sharing the sofa with him. “But when she’s hungry or wants to go outside, she’s my dog,” Sharon says.

While Dale and Sharon still miss Sitka, they appreciate the love and many benefits Maggie has to offer.