Laser light therapy could help to boost short-term memory, after a session of just 12 minutes.

A laser beam can improve people’s working memory by up to 10 per cent, according to the authors of a new study.

Researchers aimed a laser above people’s right eye, just below their hairline, to penetrate into their brain and stimulate their prefrontal cortex.

An experiment involving 23 volunteers then immediately showed them a series of shapes on a screen, asking if each was the same or different to the one before.

When people’s brains were zapped using the laser, they got 2.1 answers right in the memory test on average, when answering if the shapes were a different colour. 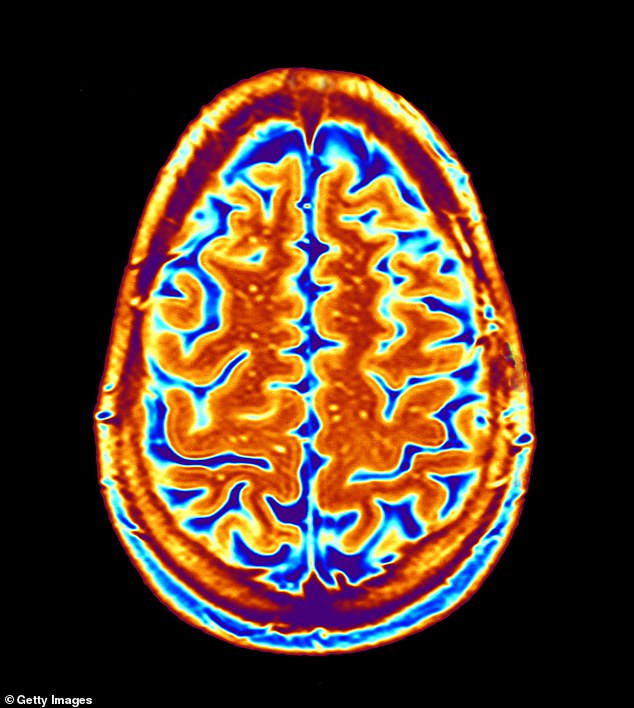 Researchers aimed a laser above people’s right eye, just below their hairline, to penetrate into their brain and stimulate their prefrontal cortex for 12 minutes

That compared to a significantly worse score of 1.9 correct answers – when subjected to a laser of a different wavelength, which does not boost the brain.

Professor Ole Jensen, a co-author of the study from the Centre for Human Brain Health at the University of Birmingham, said: ‘Many people want to improve their short-term memory, which is useful for everything from remembering phone numbers and shopping list to following a conversation, novel or film.

‘In a couple of years it might be possible to help people with memory problems to use a laser to boost their memory.

‘This would be relevant for the ageing population but also for individuals with problems associated with attention, such as ADHD and traumatic brain injury.’

The study, published in the journal Science Advances, builds on previous evidence that lasers can boost short-term working memory.

But researchers, who tracked people’s brain activity using EEG scans, have also now found a link between improved memory following laser therapy and increased activity in the posterior of the brain – the parietal cortex.

Experts believe a laser boosts the prefrontal cortex at the front of the head, so it sends a stronger signal to the parietal cortex at the back – ‘instructing’ that area to keep information which has just been learned fresh in the memory.

The laser used in the study, creating a beam four centimetres (1.5 inches) in diameter, and produced by a handheld device about the size of a torch, currently costs around £10,000.

But researchers say future versions could cost just hundreds of pounds and could help improve the memories of people with Alzheimer’s disease and ADHD, which makes it hard to focus.

The laser could be used by people with no memory problems, having been found in the study to boost memory similarly well whether someone had a good or bad memory to start with.

The study, which involved 90 people in total, also showed the laser boosts short-term memory at a specific wavelength, and when directed above the right eye, not the left.

People did better at remembering up to four shapes on a screen, shown at different rotations and in different colours, and whether they had seen them before.

For the different rotations, they got 1.7 answers right on average normally, with the ineffective laser, compared to a significantly higher score of 1.9 following the laser therapy.

The effects of laser therapy, which was trialled in the study on people aged 18 to 25 to China, appear to kick in after around 15 minutes and start to drop off after around 20 minutes.

Volunteers wore goggles and closed their eyes to protect them, but the laser, unlike electrical currents used similarly to boost people’s memories, does not produce noise or a tingling sensation.

Professor Jensen said: ‘More research is needed to show how long the effect lasts and how long the laser treatment needs to last.’ 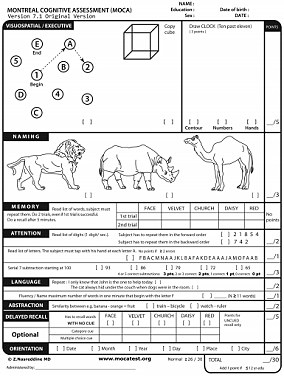 President Donald Trump received a perfect score on a standard cognitive assessment test, his doctor revealed in a White House briefing in January 2018.

The 10-minute test, known as the Montreal Cognitive Assessment (MoCA), was created in 1996 for medical professionals to identify mild cognitive dysfunction.

Trump scored 30 out of 30. A score above 26 is deemed ‘normal,’ while anything lower than that is cause for concern.

Those who do well on the test do not need further cognitive examination.

The average score is 27.4. People with mild cognitive impairment score an average of 22.1, while Alzheimer’s patients tend to score around 16.

First used in Montreal, Canada, the test is now one of the most respected methods of assessing cognitive health worldwide, available in 55 languages and dialects, and formats for testing illiterate patients and in other cultural settings (by changing certain references).

Trump is the first U.S. president to undergo the test as part of his presidential physical.

This is how a doctor performs the test, and how a patient is graded:

TEST: The patient is told to pair up five numbers and letters (1-5, A-E) in ascending order (pairing 1 with A, 2 with B, etc) while drawing connect-the-dots lines.

RESULT: The patient gets a point for every successful pair: 1-A; 2-B; 3-C; 4-D; 5-E. No lines can be crossed. The patient earns 0 if they make a mistake that is not immediately corrected.

TEST: Draw your own version of the cube in the space next to it.

It must be exactly the same as the one printed on the page.

RESULT: One point if it is drawn correctly (i.e. three-dimensional, all lines are drawn, no line is added, lines are relatively parallel and their length is similar – no point if any of those criteria are missing).

TEST: Draw a clock, putting in all the numbers and set the time to 10 minutes past 11 o’clock.

RESULT: One point is allocated for each of the following three criteria:

A point is not assigned for a given element if any of the above-criteria are not met.

RESULT: One point for each

The doctor tells the patient that they are going to read a list of words that the patient must remember. At the end the patient has to tell them as many as they remember; it doesn’t matter what order.

The doctor then reads five words, one per second:

As the patient recites the words, the doctor marks a check in the box for each word said aloud.

The patient indicates when they have recalled all they can.

The doctor reads the list a second time. At the end the patient has to recall all of them again.

As the patient recites the words, the doctor marks a check in the box for each word said aloud – including the first five again.

The patient indicates when they have recalled all they can.

At the end of the test, the doctor asks the patient to recall the five words, unprompted. This is the part of the test that is scored.

SCORING: No plus points, only minus if they get it wrong.

Recall numbers: The doctor reads a list of five numbers at a rate of one number per second; the patient recalls them exactly as they were said:

Recall numbers backwards: The doctor reads three numbers at a rate of one number per second; the patient recalls them backwards:

TEST (LETTERS): The doctor reads a list of letters at a rate of one per second. Every time they say the letter ‘A’, the patient has to tap their hand:

SCORING: One point if there is zero errors or just one error (i.e. the patient tapped their hand on another letter just once).

TEST (MATH): The patient starts at 100, then must count down by subtracting seven every time, until the examiner tells them to stop:

If the first subtraction is wrong, but each subsequent subtraction follows the pattern of seven, they still earn every other point. For example, they may say ’92 – 85 – 78 – 71 – 64′. While ’92’ is incorrect, all subsequent numbers are subtracted by seven, meaning they only made one mistake, and would a score of three.

Step one: The examiner reads this sentence, and the patient has to repeat it exactly: ‘I only know that John is the one to help today’.

Step two: The examiner then reads another sentence, with the same instruction: ‘The cat always hid under the couch when dogs were in the room’.

SCORING: One point for each correct sentence.

TEST: The doctor reads out a letter (F), and the patient has to think of words that starts with that letter. The aim is to reach 11 words or more in 60 seconds.

SCORING: One point if they reach 11 words or more in one minute.

TEST: The patient has to describe what the relationship is between certain words (i.e, an orange and a banana; a train and a bicycle; a ruler and a watch).

There is one practice trial (ORANGE AND BANANA) before two scored pairs (TRAIN AND BICYCLE; WATCH AND RULER).

SCORING: One point for each of the last two pairs.

TEST: The patient has to recall all the words they heard earlier (FACE, VELVET, CHURCH, DAISY, RED).

SCORING: One point for each word recalled (with no cues from the examiner).

TEST: Say the exact date, and the name of the place they are in, including the city.

SCORING: One point for each correct answer. No points if they make any errors.

Add up all the points accumulating, adding a point if the patient has fewer than 12 years of formal educations.