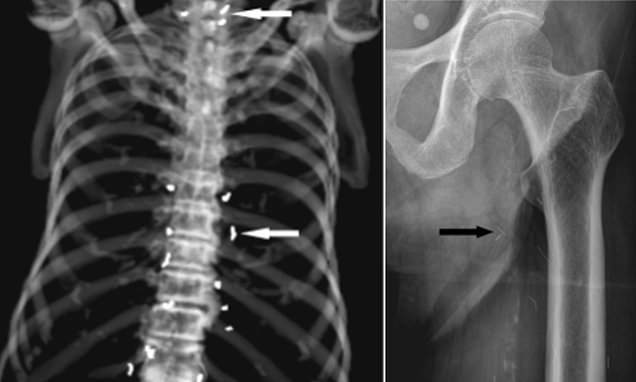 Woman, 94, went to hospital after a fall only for doctors to discover acupuncture needles had been buried along her spine for 30 YEARS

Incredible X-rays show acupuncture needles buried along the spine of a 94-year-old woman.

The unnamed woman, who had recently been diagnosed with dementia, went to the division of general internal medicine at the University of Toronto after a painful fall.

Doctors took scans of her back and hips to rule out any fractures, only to discover what looked like tiny flecks along her spine and at the top of her legs.

The medics were told by the woman’s carers she had visited a traditional Korean Hari acupuncture clinic just once 30 years before. Hari involves leaving needles permanently under the skin in the belief they relieve pain. 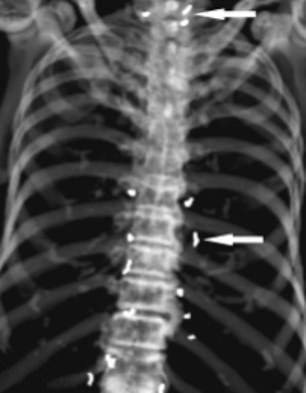 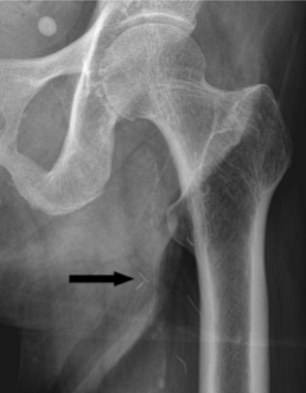 X-rays revealed a 94-year-old unnamed women had acupuncture needles buried along her spine (left) and at the top of her legs (right). She had visited a Hari acupuncture clinic just once 30 years before. The practice involves deliberately leaving needles in place to relieve pain

Due to her suffering no ill effects from the alternative medicine, the woman was only treated for a urinary tract infection she was suffering from before being sent home.

The woman arrived at hospital after she claimed to have fallen over in an incident her carers did not see, according to BMJ Case Reports.

Doctors first examined her back and hips, which did not seem overly tender. They then carried out X-rays to be on the safe side.

After discussing the images with the woman and her carers, the medics were told the patient, who was of Korean descent, visited a Hari clinic with the intention of gold needles being left inside her to combat her ongoing pain.

The authors of the report claim it is unclear how many people have Hari needles inside them but they believe this woman’s 30-year case is the longest ever.

Hari originated in Japan and is commonly practiced on the island, as well as in Korea and among Asian communities in North America.

Gold needles are traditionally used due to them being associated with wealth in Korean culture.

Hari is a rare form of acupuncture compared to the more commonly known practice where needles are removed.

There is evidence the gold needles used can migrate from the muscles they were left in to the internal organs.

Gold is ‘MRI compatible’, however, Hari could be dangerous if someone has a scan or X-ray with other types of metal in their bodies that medics are unaware of.

Metals that are attracted to magnets – including iron, nickel and cobalt – become magnets themselves when they enter a magnetic field.

When two magnets are in close proximity they align themselves so their polar fields attract. This could cause metal within the body to twist and turn.

The so-called ‘missile effect’ can also occur, which is when magnetic objects are propelled by enormous amounts of energy across the room towards an MRI scan.

Both of these phenomena have caused serious injuries and even killed people.

The authors warn acupuncture is on the rise in the western world as people are increasingly turning to complementary therapies over conventional medicine.

They believe being aware of Hari may avoid confusion if doctors are presented with unusual flecks in X-rays and will help ensure patients stay safe while having X-rays.

WHAT IS HARI ACUPUNCTURE?

Hari is a unique form of acupuncture in that the needles are permanently left beneath the skin in the muscle.

It originated in Japan and is commonly practiced on the island, as well as in Korea and among Asian communities in North America.

Gold needles are traditionally used due to them being associated with wealth in Korean culture.

The needles used are typically 3-to-15mm long and 1mm wide. They can be straight, curved or semicircles.

But it has been linked to infection, collapsed lung, spinal cord injuries and the accumulation of fluid around the heart.

Hari is a rarely practiced form of acupuncture and therefore its risks are unclear.

However, there is evidence the gold needles used can migrate from the muscles they were in to a person’s internal organs