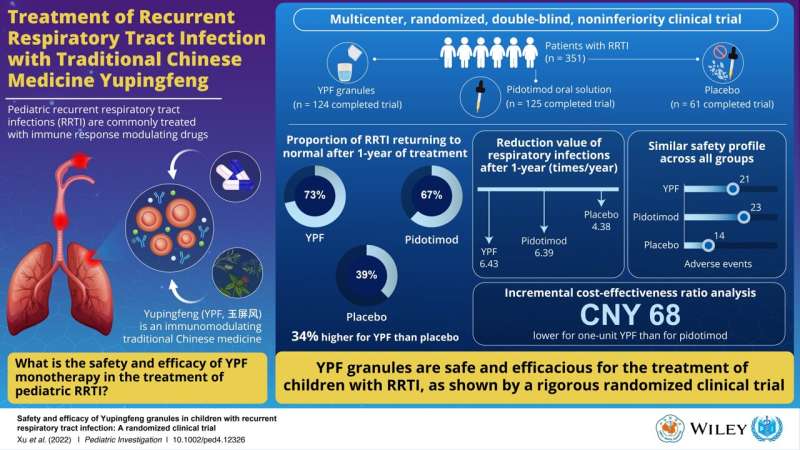 The practice of traditional Chinese medicine (TCM) commenced as early as 14th century BC, and it has now become an active hotspot of research. Despite this, TCM is frequently viewed with great skepticism in the Western world and equated to a pseudoscience. This is often because the effects of TCMs are poorly understood and few studies have documented their efficacy and safety via randomized controlled clinical trials (RCTs). One such TCM is Yupingfeng (YPF, 玉屏风)—a patented formula available as compounded granules that includes Astragali radix (Huangqi), Atractylodis macrocephalae rhizoma (Baizhu), and Saposhnikoviae radix (Fangfeng)—which is often used in China to treat recurrent respiratory tract infections (RRTIs) in children. Although YPF is known to improve immune function, the evidence for its efficacy against pediatric RRTIs has remained weak.

To address this gap, a large group of researchers from China conducted a multicenter RCT to evaluate the safety and efficacy of YPF in children with RRTIs. The results from this double-blind RCT were first published on June 2, 2022, in the journal Pediatric Investigation. Prof. Kunling Shen, who spearheaded this study, explains that they “wanted to perform a rigorous investigation to understand the therapeutic benefits of YPF. This is why we conducted a large scale RCT, the gold standard of clinical studies, and enrolled patients not from a single center but from multiple hospitals.”

This study enrolled 351 children with RRTIs (aged 2–6 years) who were randomly divided into three groups. While the first group received YPF, the second group received pidotimod—a conventional allopathic drug used for RRTI treatment since the ’90s. The third group only received placebo treatment. To remove as much bias as possible, neither the patients nor their doctors were made aware of the treatment being administered. Following 8 weeks of treatment, the investigators examined the proportion of patients in whom the frequency of infections reduced to average levels (i.e., RRTIs returning to normal standard). They also examined the reduction in RRTI events and safety in each group.

During 52 weeks of follow-up after the treatment, the proportion of RRTIs returning to normal standard was only 39% in the placebo group. However, it was much better at 73% and 67% in the YPF and pidotimod groups, respectively. These two groups also showed a substantially greater reduction in RRTI events during the follow-up. Moreover, the safety profile was similar across all three groups. Together, the findings indicated that YPF was not inferior to pidotimod in treating RRTIs and did not have any safety issues either. YPF also costs less than pidotimod and was thus a more economically feasible option.

“The strength of our study lies in its rigorous design. It is the largest multicenter study to prove that YPF, a TCM, can be as effective as an allopathic drug in treating RRTIs. It is a major step forward in sharing the benefits of TCM with the world,” comments Prof. Rong Ma, who led this study along with Prof. Shen.

Indeed, this study has cemented the value of YPF in treating RRTIs, which are common among children in China and in other parts of the world. It shows that TCMs can be as effective and safe as allopathic drugs, even though we may not fully understand the biological mechanisms underlying their effects. Dr. Julian L. Allen, an Associate Editor at Pediatric Investigation, wrote an editorial and said “Just because we don’t understand how a drug works, it doesn’t mean that it doesn’t work. This well-designed RCT could be an important step in addressing western skepticism surrounding TCM and reaping the benefits of its holistic effects.”