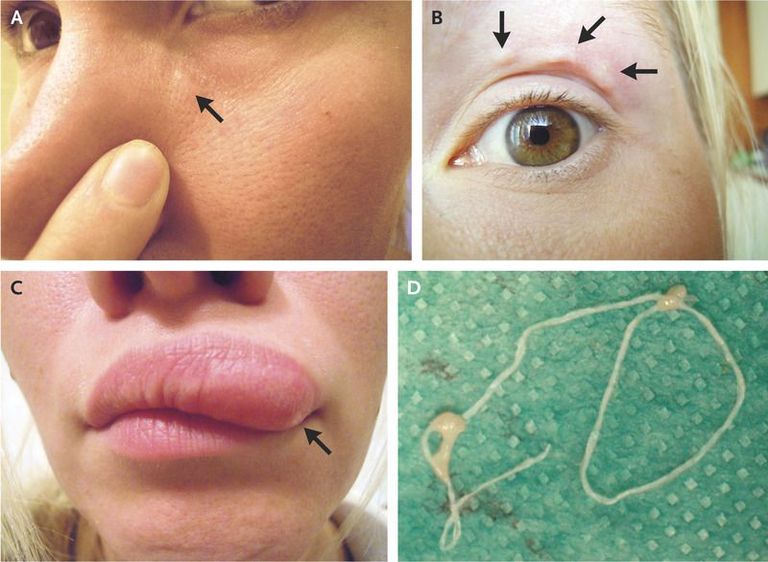 Two things you never want to happen to you: finding a worm crawling around in your face; and ending up as a case study in a medical journal because of it.

Unfortunately, a Russian woman just had both of those things happen to her.

According to a new report published in the New England Journal of Medicine, a 32-year-old woman (whose name hasn’t been released, because obviously) noticed a weird lump that seemed to move across her face.

The bump first appeared below her left eye, then reappeared on her upper left eyelid five days later. After 10 days, it moved to her top lip, causing some seriously intense swelling. She and her doctors snapped pics of the whole thing, so there’s actual, terrifying photographic evidence.

The woman said the bump felt a little itchy and burned at times (because, face worm), but she felt fine, otherwise. She ended up seeing an ophthalmologist to try to figure out what the heck was going on.

Turns out, the moving bump was a parasite known as a Dirofilaria repens, a type of long, thin parasitic roundworm that enters its hosts through mosquito bites, according to the Centers for Disease Control and Prevention.

Do I even want to know more about Dirofilaria repens?

There are actually three types of Dirofilaria that can affect humans—D. immitis, D. repens (this was the one in our Russian friend’s face), and D. tenuis.

Typically, these worms only infect dogs, foxes, or raccoons. (FYI: D. immitis is also known as “heartworm” in dogs.)

But dirofilariasis (the infection caused by these worms) is still more common in humans than you’d want it to be. In fact, Vladimir Kartashev, a professor of medicine at Rostov State Medical University, who treated the woman in this case study, wrote a study on dirofilariasis in 2015.

His research showed that between June 1997 and June 2013, nearly 1,300 cases of dirofilariasis were found in Russia and Belarus, usually among women who visited rural areas—which is how the unnamed woman in this case study is thought to have contracted the infection.

Luckily, D. repens (a.k.a., the type of worm most likely to infect humans) is not—I repeat: IS NOT—found in the U.S., though it is the leading cause of dirofilariasis in Europe.

Dirofilariasis is also pretty preventable, thanks to insect repellant and keeping your skin covered in mosquito-heavy areas, per the CDC (you know, if you’re traveling in rural European areas in the near future).

As for this unnamed woman—her doctors performed surgery to remove the worm and she made a “full recovery,” according to the journal. Phew.

The bottom line: Dirofilariasis is downright terrifying—but it’s not something you need to worry about if you live in the U.S. If you’re traveling to Europe…buy bug spray in bulk.