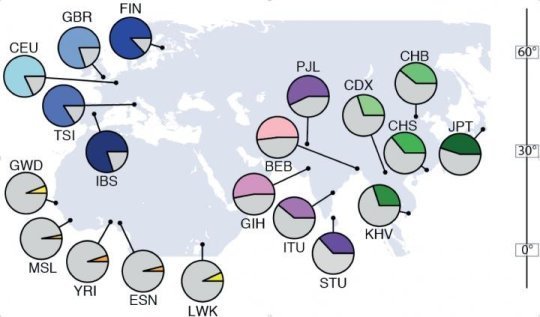 A common genetic variant implicated in migraine headaches may have proliferated because it helped early humans adapt to cold weather in northern climates. Felix Key of the Max Planck Institute for Evolutionary Anthropology and colleagues report these findings in a new study published May 3rd, 2018 in PLOS Genetics.

Within the last 50,000 years, some humans left the warm climate of Africa to colonize colder locales in Asia, Europe, and other parts of the world. “This colonization could have been accompanied by genetic adaptations that helped early humans respond to cold temperatures” says Aida Andres, who supervised the study. To find evidence of this adaptation, researchers took a closer look at TRPM8, a gene that codes for the only known receptor that enables a person to detect and respond to cool and cold temperatures. They discovered that a genetic variant upstream from the gene, which may regulate it, became increasingly common in populations living in higher latitudes during the last 25,000 years. Only 5% of people with Nigerian ancestry carry the variant, compared to 88% of people with Finnish ancestry. Currently, the percentage of people in a population that carry the variant increases at higher latitudes and with colder climates. Interestingly, scientists had already identified this variant as being strongly associated with migraine headaches.

Migraine is a debilitating neurological disorder that affects millions worldwide. The percentage of people who suffer from the disorder varies across human populations, but is highest in individuals of European descent, which is also the population with the highest frequency of the cold-adaptive variant. The researchers suspect that adaptation to cold temperatures in early human populations may have contributed, to some extent, to the variation in migraine prevalence that exists among human groups today. Felix Key pointed out that “this study nicely shows how past evolutionary pressures can influence present-day phenotypes.”