UK prime minister Boris Johnson announced on June 14 that the fourth and final stage of England’s lockdown easing, due to take place on June 21, would be delayed by four weeks. Now scheduled for July 19, stage four will see the removal of all remaining legal restrictions, allowing groups of more than six (or two households) to meet socially indoors, nightclubs to reopen, and businesses such as pubs and hotels to return to operating at full capacity.

For now, though, people will have to wait. This will be frustrating for everyone, but when looking at the data, the logic of the government’s decision makes sense.

A key factor in decisions about restrictions in England has been the number of patients in hospital with COVID-19, as this affects the ability of the NHS to treat both patients with severe COVID-19 and also non-COVID patients. We also know that patients needing hospital care for COVID-19 generally develop severe symptoms around two weeks after infection. This means the impact of lockdown policies have an impact on numbers in hospital only after this lag.

This trend indicates both that the national lockdown was effective in reducing hospitalisations, as had been the case in the past, but also that the gradual unlocking in stages one and two (in March and April respectively) did not lead to a rise in hospital admissions. This is despite the increased interactions allowed in these first two stages. 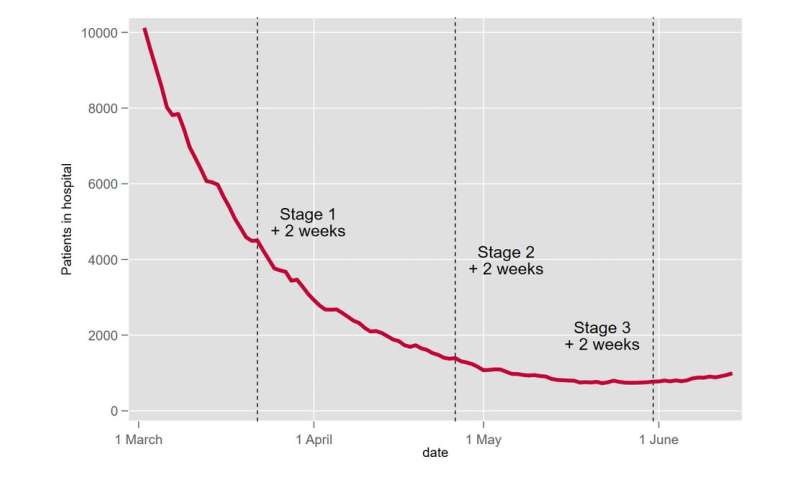 At the same time, spring 2021 has also seen vaccines for COVID-19 being rolled out, beginning with the groups most at risk of requiring hospital treatment if infected. The latest data indicates that two weeks after a first dose of a vaccine, a person is 75% less likely to require hospital treatment for COVID-19 than an equivalent unvaccinated individual. Two weeks after a second dose, this reduction increases to around 94%.

Vaccine take-up has also been extremely high. On June 13, nearly 79% of adults in England had received a first vaccine dose and over 54% a second. The coverage of protection is greatest among the most vulnerable, with over 90% of the over-60s being fully vaccinated.

So far, so positive. But problematically, there has also been an upward trend in the number of cases and the number of patients in hospital with COVID-19 over the past month. To some extent this will be down to the increased interactions between people that have taken place since the last round of lifting on May 17.

However, the problem will also have been exacerbated by the more transmissible delta variant of the coronavirus, which is now dominant in the UK. The latest Public Health England analysis (released as a preprint, meaning it has yet to be formally reviewed by other scientists) suggests the delta variant is around 60% more transmissible than the previously dominant variant, alpha. 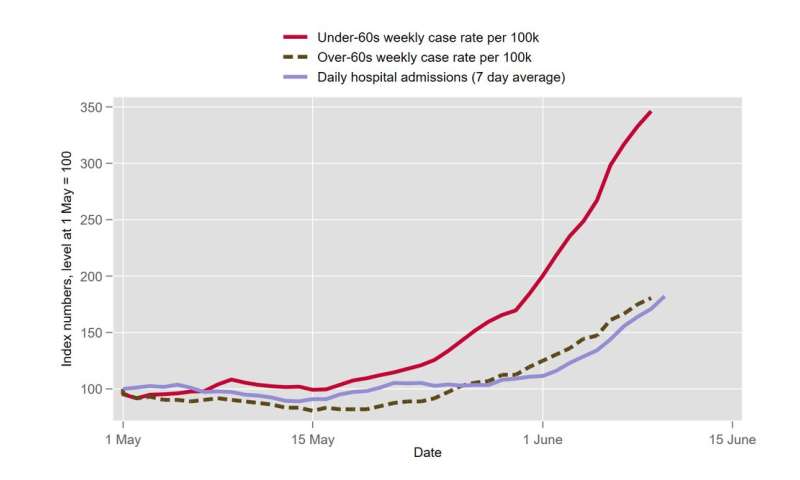 A mitigating factor is that the vaccine program has been effective in weakening the link between overall case numbers and hospitalisations. The graph below shows that the recent rise in cases is strongest among younger people, who are less likely to be fully vaccinated. New cases in the under-60s are nearly four times the level they were in early May. In contrast, the rise in cases in the over-60s is much smaller, a little less than twice what it was in early May, which mirrors the rise in hospitalisations, also up by a similar amount.

It therefore appears sensible to pause further relaxations of restrictions at this point to allow more vaccines to be given before moving to stage four. This should reduce and ideally overturn the current upward trend in hospitalisations.

By July 19, England is aiming to have offered all adults a first vaccination and everybody aged over 50 a second vaccination. This goal is likely to be exceeded given the current pace of the vaccine rollout: over 70% of over-50s have already had two doses.

People in their 40s, less than 50% fully vaccinated with both doses, is the main group with room for improvement. Although COVID-19 poses the greatest risk to the elderly, vaccinating younger groups like this should still have a good impact on reducing hospitalisations. Before the vaccine rollout got going, approximately 20% of patients admitted to intensive care with COVID-19 were under 50. Most were patients in their 40s.

A further four weeks also comes close to the beginning of school summer holidays, and so the extension is expected to reduce transmission without impacting further on education. While the final removal of restrictions may still lead to an increase in infections and hospitalisations, SPI-M—the government’s modeling group—has predicted that the peak of this wave would be reduced by between one-third and one-half by waiting four more weeks to relax restrictions.