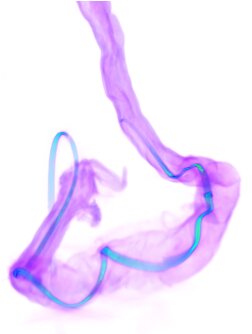 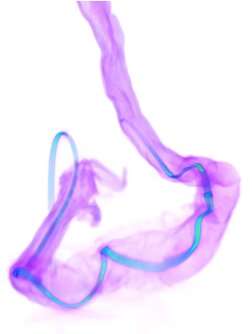 Imbalances in brain chemistry are at the heart of many neurologic diseases. These same brain chemicals also play roles in gut health. So, scientists at Stanford have invented “NeuroString”—a soft implantable probe that can interface seamlessly with both brain and gut tissue. They describe the probe in a paper published June 2, 2022 in Nature. It has potential applications in depression, Parkinson’s disease, and intestinal diseases.

“The mainstream way people are trying to understand the brain is to read and record electric signals,” says Jinxing Li, the paper’s first author. “But chemical signals play just as significant a role in brain communication, and they are also directly related to diseases.” Li started and performed the work as a postdoc in Zhenan Bao’s lab in Stanford’s Department of Chemical Engineering; he is now an assistant professor of biomedical engineering at Michigan State University.

NeuroString measures dopamine and serotonin, two chemical messengers that modulate electrical signals in neurons. Dopamine is best known for its role in the brain’s reward system; serotonin is the target of antidepressants like Prozac. Both are also involved in movement, sleep, appetite, and digestion.

Implants that measure dopamine and serotonin already exist, but they are made of rigid carbon rods encased in glass tubes. “Those are very rigid probes. They are very brittle,” Li says. Not only can the implant shatter, it also chafes against the squishy tissue in the brain, which can inflame brain cells and degrade the implant.

Bao’s lab engineered a soft probe. “My group has been making soft electronics for quite some time,” says Bao, the K. K. Lee Professor and chair of the Department of Chemical Engineering in the Stanford School of Engineering. The probe is made of graphene, a form of carbon that is atomically thin. Bao’s team used a laser to engrave what Li describes as a “hairy entangled network of graphene” into a plastic. The plastic contains molecules that turn into nanoparticle dots on the surface of graphene that can improve the sensitivity and selectivity for simultaneous measurement of dopamine and serotonin. The researchers then embedded the network in a rubber matrix.

“Graphene itself is not very stretchable but if it is entangled as a mesh and embedded in a rubber, then it becomes stretchable,” Li explains.

Bao adds, “It’s like a kirigami. If you cut patterns into and then you can stretch it, you see some kind of hollow connected paper network. It’s the same thing here, but the network is made of graphene sheets.” NeuroString has the same softness as biological tissue. “The sensor is soft and elastic, like a rubber band, which does not cause damage when implanted into the brain or the gut, which is not only soft but also constantly moving,” Bao says.

To test the probe, Bao’s team collaborated with Stanford scientists from biology, psychiatry, gastroenterology, and surgery. “I think that’s the most privileged part of Stanford: It is quite open and collaborative,” Li says.

“The first time we saw the signal from the probe was a eureka moment,” says co-author Xiaoke Chen, associate professor of biology. “Chronic recording of dopamine and serotonin signals in freely moving animals is a dream experiment that we always wanted to do. And with this beautiful collaboration, we were able to make it happen.”

The implanted mice behaved and ate normally and had normal bowel movements. “The exciting thing about the tool was that it did not seem to disrupt the normal function of the tissue,” says co-author Aida Habtezion, professor of medicine. This means that the implant could someday be used for real-time monitoring in humans, akin to a smartwatch, but able to track biochemical levels rather than heart rate or steps, she says. Habtezion is currently on a leave of absence and serving as the Chief Medical Officer of Pfizer, but contributed to the work while she was still at Stanford.

Tracking serotonin levels in the gut could be useful in diagnosing and monitoring intestinal diseases such as irritable bowel syndrome. Tracking dopamine levels in the brain could be useful in Parkinson’s disease, which is caused by a lack of dopamine. One of the treatments for Parkinson’s disease, deep brain stimulation, works in part by stimulating neurons to produce more dopamine. If deep brain stimulators could be paired with NeuroString, this would allow doctors to precisely control the amount of dopamine released.

The implant is not yet ready for clinical use. For one thing, the probe is still attached to wires that read out the signals; a wireless version would be needed for use in people. In the meantime, the probe has many uses in research. For example, antidepressants like Prozac work by modulating serotonin levels, which may explain why they sometimes cause gastrointestinal side effects, Chen says. “We now have the tool to allow real-time monitoring of the impact of those drugs on serotonin fluctuation in both the brain and gut in mouse models.”