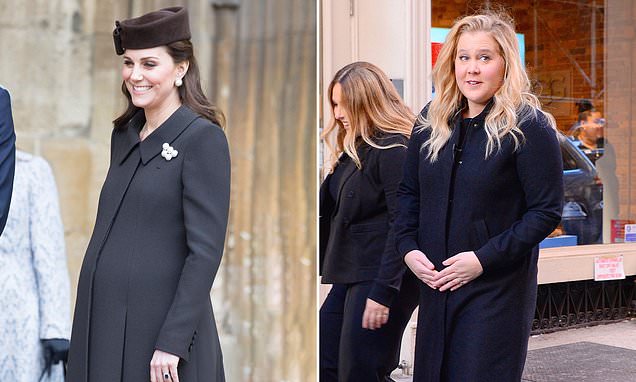 Results showed women were 53 per cent more likely to have children with autism spectrum disorder if they battled HG.

Although unclear exactly why this occurs, intense nausea and persistent vomiting may put pregnant women off food or leave them unable to keep it down.

The scientists behind the study, from Kaiser Permanente, believe this could trigger nutritional deficiencies that affect a child’s ‘neurodevelopment’.

Kate Middleton endured hyperemesis gravidarum throughout all three of her pregnancies. She is pictured left at the Easter Sunday service at Windsor Castle in April last year while pregnant with Prince Louis. Comedian Amy Schumer ‘threw up violently mostly every day’ while pregnant with her son Gene. She is pictured right in October last year in New York

‘This study is important because it suggests children born to women with HG may be at an increased risk of autism,’ lead author Dr Darios Getahun said.

‘Awareness of this association may create the opportunity for earlier diagnosis and intervention in children at risk of autism.’

Around seven in 10 pregnant women experience nausea or vomiting at some point, NHS statistics show. For most, this usually improves or disappears by week 14.

However, around one in 100 suffer excessively, known as HG.

In the US, HG is thought to affect between 0.5 and two per cent of pregnant women, according to the National Organization for Rare Disorders.

Some patients report being sick up to 50 times a day. As well as causing dehydration and weight loss, many develop low blood pressure and ketosis.

This is a serious condition that leads to acidic chemicals building up in the blood and urine.

If HG cannot be controlled with at-home drugs, women may be forced to have fluids and anti-sickness medication given intravenously at hospital.

To determine whether the condition is linked to autism, the scientists analysed the health records of 469,789 women and their children. The youngsters were born between 1991 and 2014.

Results – published in the American Journal of Perinatology – found the children were more likely to be diagnosed with autism before they turned 17 if their mother had HG in her first or second trimester.

Diagnosis during the first trimester specifically raised the risk by 58 per cent, while the second trimester increased it by 36 per cent.

No link was found for those who were diagnosed in the final stage of pregnancy. The study, however, did not prove HG in mothers-to-be can cause autism in their children.

HG increased the risk of autism regardless of how severe the mother’s symptoms were, the results show.

The risk was higher among girls. The white and Hispanic participants were also more likely to develop the developmental disability than those who were black or from the Pacific Islands.

The results also found ‘commonly-prescribed medication to treat mild forms of autism’ did not increase the autism risk.

The findings are ‘consistent’ with the theory HG causes ‘poor nutritional intake’ in women, the scientists said.

Even if this lasts just a few weeks, it can lead to ‘foetal deficiencies at a vulnerable period in organ development’.

Another theory is HG causes the placenta to lack oxygen and protein, changing its function.

The organ produces ‘a number of neurodevelopmental factors’ that regulate ‘neuron development’ and may be disrupted in autism, the scientists wrote.

They added, however, other factors may also trigger autism, such as exposure to certain drugs or smoke in the womb.

Kate Middleton suffered from HG during all three of her pregnancies. The Duchess was forced to spent three days in hospital in December 2012 while expecting her eldest Prince George.

She was also too ill to be present for his first day at school while pregnant with Prince Louis.

Comedian Amy Schumer revealed she had to be hospitalised due to severe nausea during her second trimester.

She later cancelled a leg of her tour when her symptoms became so severe she was unfit to fly.

‘I threw up violently and felt sick mostly every day of my pregnancy,’ she wrote in an Instagram post after the birth of her son Gene. ‘Hyperemesis is real and it’s awful.’

WHAT IS HYPEREMESIS GRAVIDARUM?

Hyperemesis gravidarum (HG) is defined as severe nausea and vomiting during pregnancy.

Celebrities who’ve been open about their own battles with HG include:

It affects up to two percent of pregnant women.

HG symptoms usually appear between weeks four and six and peak at 9-to-13 weeks.

Up to 20 per cent of sufferers experience symptoms up to weeks 14-to-20, however, most have relief in the later stages.

Unlike morning sickness, which affects up to 80 percent of pregnant women, HG causes severe dehydration and prevents sufferers from keeping any food down.

Some HG cases require hospitalization where women can receive IV fluids and nutrition.

HG’s cause was thought to be hormonal, however, research suggests it may be due to genetic variations.