Scientists have developed a brain scan that may be able to detect early signs of Alzheimer’s disease.

The scan has radioactive ‘tracer’ molecules that are injected cranially, which bind to and ‘light up’ plaques in the brain that are believed to cause cognitive decline.

In the past, doctors have relied heavily on memory tests – which are not especially reliable – for diagnosing people with Alzheimer’s.

The small study, from Johns Hopkins University in Baltimore, Maryland, sheds fresh light on the age-related brain disease and could offer hope of earlier diagnosis and treatments that could slow down the progression of symptoms. 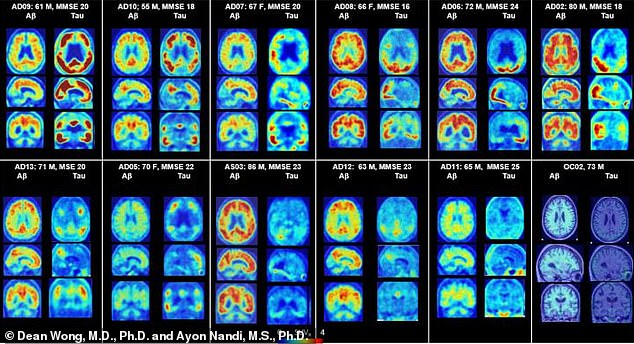 About 5.7 million Americans of all ages are living with Alzheimer’s disease in 2018.

By 2050, this number is estimated to rise to almost 14 million, according to the Alzheimer’s Association.

Sufferers experience a decline in cognitive, behavioral and physical abilities and there is no cure.

HOW TO DETECT ALZHEIMER’S

Alzheimer’s disease is a progressive brain disorder that slowly destroys memory, thinking skills and the ability to perform simple tasks.

It is the cause of 60 percent to 70 percent of cases of dementia.

The majority of people with Alzheimer’s are age 65 and older.

It is unknown what causes Alzheimer’s. Those who have the APOE gene are more likely to develop late-onset Alzheimer’s.

There is no known cure for Alzheimer’s, but experts suggest physical exercise, social interaction and adding brain boosting omega-3 fats to your diet to prevent or slowdown the onset of symptoms.

Those who have the disease have a build-up of two proteins, amyloid beta and tau, in the brain that form clumps, which smother and destroy neurons – leading to loss of memory and confusion.

Lead author Dr Dean Wong, a radiologist at Johns Hopkins Medicine, said one of the biggest problems with studying Alzheimer’s is being unable to watch the proteins develop in real time.

‘One of the challenges in studying Alzheimer’s is that we have a disease that cannot be cured and doesn’t have a clear diagnosis until autopsy,’ he told DailyMail.com

‘We’ve been working to identify new radio-pharmaceuticals to speed up diagnostics and treatments for these neurodegenerative disorders.’

In a previous study, the team tested about 550 potential tracer molecules, before narrowing it down to three.

For the study – which was broken into three parts – the team examined 12 patients diagnosed with Alzheimer’s disease, seven young healthy controls between ages 25 and 38, and five older healthy controls aged 50 and older.

In the first part, each participant was injected with two of the three tracers, during separate visits, and then received PET scan to determine which tracer performed best.

The 12 control adults retained little to no tracer. But the tracer lit up tangles of tau in regions of the brains of Alzheimer’s patients consistent with previously reported data.

They found that, compared to the currently used tracer, the new tracer does not stick indiscriminately to other tissues – meaning it will likely give a greater understanding of how much protein builds up the brain can accumulate.

‘We now have at least two ways of imaging tau in the brain and neuroscientists it might help with early detection of Alzheimer’s and monitoring future treatments,’ Dr Wong said.