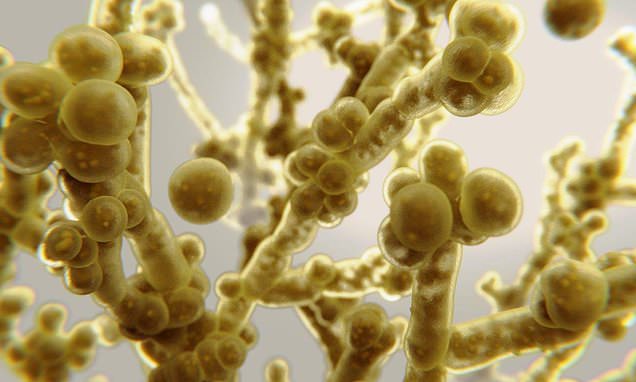 Global warming is to blame for a deadly fungus which has spread across the world like wildfire, according to scientists.

Researchers believe rising temperatures are allowing candida auris to evolve to live at higher temperatures, meaning they can survive inside humans.

Candida auris is already often resistant to many drugs, making it a serious threat to human health.

The fungus was only identified in Japan a decade ago but has since cropped up in other countries.

It has since been spotted in the US, Canada, Venezuela, Colombia, South Africa and India, as well as Spain, Norway, and Germany.

And reports earlier in the year revealed that at least 260 people across the UK have caught the infection since 2012. 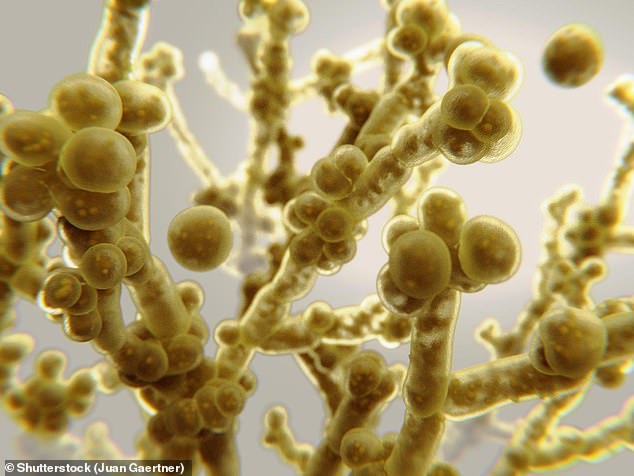 Candida auris is known to cause infection and at least 260 people have caught it in the past six years in the UK. In tests experts found it is now able to survive higher temperatures than similar fungi (stock image)

Scientists at Johns Hopkins University in Baltimore, Maryland, investigated the rise of C.auris and suggested warming is causing it.

‘What is unusual about Candida auris is that it appeared in three different continents at the same time,’ said Dr Arturo Casadevall.

‘And the isolates from India, South Africa, and South America are not related. Something happened to allow this organism to bubble up and cause disease.’

‘We began to look into the possibility that it could be climate change,’ he added on the back of the study.

Extremes of temperature are known to kill fungi and the heat required to destroy them varies across different strains.

The human body temperature is around 36 to 38°C (97-100°F), which would be hot enough to kill or at least slow down or cripple many strains of fungi.

For this reason, cold-blooded reptiles and amphibians are more affected by fungal illnesses than mammals.

WHAT IS C AURIS?

Candida auris (C auris) is a harmful form of yeast, identified by the CDC as a ‘superbug’ fungus.

It tends to be diagnosed in patients after they’ve been in hospitals for several weeks.

The fungus can infect wounds, ears and the bloodstream and take root in the urinary tract.

The source of the infection for C auris isn’t the person who got sick but rather the hospital environment, including catheters, counters, and other surfaces.

It was first identified in Japan in 2009 and has since spread to more than a dozen countries worldwide.

Two of the three kinds of commonly used antifungal drugs have had little effect in treatment.

About 60 per cent of those who’ve been infected with C auris have died.

But very gradually rising temperatures in the world around us may offer the organisms time to adapt to higher heats.

In the study, C.auris was able to survive at higher temperatures than other, similar, fungi, suggesting it is evolving.

This could, in theory, work in the same way that exposing bacteria to small amounts of antibiotics can allow them to evolve to become resistant to the drugs by learning how to fight back against non-lethal doses.

Dr Casadevall added: ‘What this study suggests is this is the beginning of fungi adapting to higher temperatures, and we are going to have more and more problems as the century goes on.

‘Global warming will lead to selection of fungal lineages that are more thermally tolerant, such that they can breach the mammalian thermal restriction zone.’

The emergence of C.auris, they said, could be a warning sign that more fungi – which rarely infect humans – will adapt to cause diseases.

C. auris was first described in 2009 after being found in the ear canal of a 70-year-old Japanese woman.

In 2011, it was reported as a cause of bloodstream infection in South Korea.

In the US there have been 587 reported cases, mostly in New York, New Jersey and Illinois.

Its emergence has led it to be put onto an ‘urgent threats’ list by the Centers for Disease Control and Prevention (CDC).

Based on current information, 30 to 60 per cent of people with C. auris infections have died, according to the CDC.

Dr Casadevall said health authorities around the world need to step up their ability to keep track of fungal infections in the same way as they do bacteria and viruses.

He added: ‘We need to make investments in better surveillance of fungal diseases.

‘We are pretty good at surveilling influenza and diseases that cause diarrhoea or are contagious, but fungal diseases are not usually contagious and therefore nobody has really bothered to document them well.

‘If more fungi were to cross over, you really wouldn’t know until somebody started reporting them in [medical journals].’

The Johns Hopkins team’s work was published in the journal mBio.

CLIMATE CHANGE DEATHS ‘ARE BEING UNDERESTIMATED’

The World Health Organization is underestimating how many people will die because of climate change, experts claim.

Researchers from the London School of Hygiene and Tropical Medicine and the University of Washington picked apart the WHO’s warning that global warming will lead to the deaths of an extra quarter-of-a-million people per year between 2030 and 2050.

This translates to approximately one in every 200 deaths – around 55million people die each year – but the true toll is now expected to be significantly higher, although the study authors couldn’t put a number on it.

As well as heat stress and malaria, people will also die because of extreme weather events, migration and reduced farm productivity, they said.

And rising temperatures and intense weather around the world will endanger the lives of ‘many millions of people’.

‘There is also population displacement and a range of additional factors like food production and crop yield, and the increase in heat that will limit labor productivity from farmers in tropical regions that wasn’t taken into account among other factors.’

They said food shortages alone could lead to more than half a million (529,000) adults dying every year by 2050.

And the World Bank estimates 100million more people will be thrust into ‘extreme poverty’ – which the UN defines as deprivation of food, water, sanitation and healthcare – in the next 11 years, putting their lives at risk.