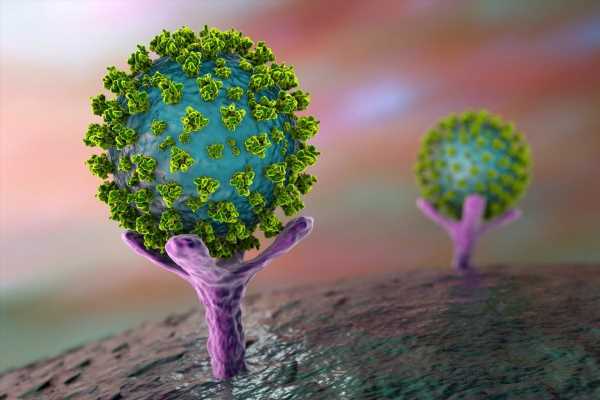 The mass vaccination programs against coronavirus disease 2019 (COVID-19) received massive media attention and were widely credited for reducing the threat of the disease. However, many countries struggle to obtain enough doses to immunize their population, and some immunocompromised individuals are less protected by the vaccines. There is still a significant need for more therapeutic options to fight infection by severe acute respiratory syndrome coronavirus 2 (SARS-CoV-2). In a study posted to the mBio* preprint server, researchers investigated differences in susceptibility between individuals and may have discovered a new opportunity for treatment.

A pseudostratified, polarized epithelium containing a layer of secretory and ciliated cells and an underlying layer of basal cells was created by differentiating primary human bronchial epithelial cells (HBEC) at an air-liquid interface (ALI) to create a model closely resembling the respiratory epithelium.

Immunostaining of the ALI cultures confirmed that the differentiated epithelium contained ciliated and secretory goblet cells. SARS-CoV-2 primarily infected ciliated cells but could attack goblet cells as well. HBEC ALI cultures from three different donors were infected with SARS-CoV-2, with the infection monitored through collection of media and apical secretions.

Viral load was determined through quantitative PCR (qPCR), which revealed significant differences in infection levels. Donor 1 showed high numbers of released virions to the apical side, which increased over time. Later on, viral shedding to the media reduced significantly. Donor 2 displayed moderate infection with no detectable viral shedding to the media – suggesting that the virus is preferentially shed to the apical side of the cultures. The cultures from donor 3 were likely never properly infected, as there was no viral release over time. The cultures from donor 3 were then reinfected with 10-fold the initial multiplicity of infection, and while a productive infection was established, infection levels were still lower than for donor 1.

The study was then expanded to include cultures from eight new individuals, four men, and four women. Once again, these were infected with a relatively low initial multiplicity of infection on day 21. Time kinetic studies of released viral titers showed clear donor differences in infection levels. The researchers divided the new donors into two groups – the five more infected individuals in ‘group high’ and the three less infected in ‘group low.’

The cultures were harvested three days after infection, and RNA sequencing was performed. This confirmed the groupings, with group high showing significant infection and group low showing little to none. Limited genetic drift was found when comparing viral reads from different donors and stock.

Statistical analyses of the uninfected samples compared to the highly infected samples identified 89 differentially expressed genes. Gene ontology enrichment analysis carried out on the 55 genes more highly expressed in group low showed strong enrichment for extracellular proteins, most prominently in extracellular matrix proteins. This could indicate that the proteins involved in reduced susceptibility exert their function outside the cells and are more likely to affect the earlier steps of the viral life cycle.

To further test this, the apical samples collected from uninfected cultures of high and low individuals were added to Vero E6 cells, which were then infected with SARS-CoV-2. The secretion from group high caused a small increase in infection, while the secretion from group low showed a 40% reduction in infection. When comparing the highly expressed genes in group low with the annotated human secretome, 20 overlapping genes were discovered, including those with serine-type endopeptidase inhibitory activity. These included SERPINE1, SERPINE2, and SERPINF1, which can inhibit the serine protease TMPRSS2.

Theorizing that the presence of specific serpins inhibited S-protein cleavage to prevent infection, the researchers attempted to discover if the reduction in group low could be explained by the presence of these serpins. ACE2/TMPRSS2-HEK293 cells were transfected with plasmids expressing individual serpins before infection with SARS-CoV-2. SERPINA1, SERPINE1, and SERPINC1 all showed a significant reduction in infection of the cells at six hours. The inhibition of SARS-CoV-2 entry was then analyzed by adding SARS-CoV-2 to the HEK cells with or without individual serpins, followed by trypsination to remove bound but not internalized viral particles. Once again, a strong reduction in SARS-CoV-2 entry was detected.

The study has successfully demonstrated that the susceptibility of individuals affects SARS-CoV-2 infection primarily at lower multiplicities of infection. Still, the effect can be seen at higher multiplicities, showing a strong connection between cellular viral replication and released progeny viruses, determining one of the likely causes of differences in susceptibility, and examining its mechanics. This could lead to further exploration of serpins as therapeutic tools against SARS-CoV-2, particularly as SERPINC1 has already been approved for alternate use by the FDA.

mBio publishes preliminary scientific reports that are not peer-reviewed and, therefore, should not be regarded as conclusive, guide clinical practice/health-related behavior, or treated as established information.

Sam completed his MSci in Genetics at the University of Nottingham in 2019, fuelled initially by an interest in genetic ageing. As part of his degree, he also investigated the role of rnh genes in originless replication in archaea.