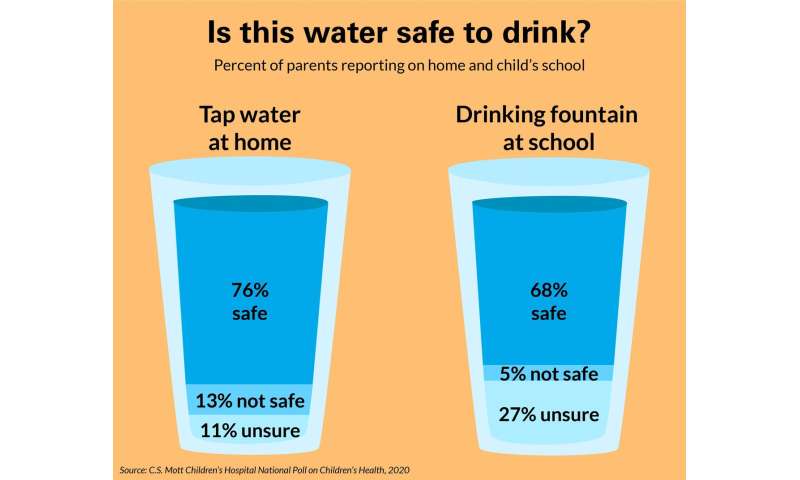 Parents from lower-income families are less likely to describe their home tap water as safe, say their water has been tested or feel confident in the quality of drinking fountain water at their child’s school compared with higher income peers, a new national poll suggests.

Two-thirds of parents from households earning over $100,000 report that both home tap water and school drinking fountains are safe for their child to drink, compared to only half of those earning under $50,000 per year, according to the C.S. Mott Children’s Hospital National Poll on Children’s Health at the University of Michigan.

The nationally-representative report is based on responses from 1,940 parents who had at least one child age 2-18 years.

“Only three quarters of parents polled said their home tap water is safe to drink, with substantial differences by household income. Disparities in access to safe drinking water for children is a significant public health issue that warrants attention.”

Overall, three in four parents say their home tap water is safe for their child to drink, but another 13% say their tap water is not safe and 11% are unsure. This feedback was consistent regardless of whether the home water source was a city water system, a rural water system or well water.

Sixteen percent of parents say they would know if their water is unsafe by its taste and smell. This is incorrect, says Clark, noting that some contaminants, such as lead, have no taste or color or odor.

Parents may also judge water discolored by iron as unsafe, when this is an aesthetic issue rather than a sign of unsafe water.

“There is no substitute for testing water for safety,” Clark says.

One third of parents also believe the city or county would notify them if there was a problem with their home water supply.

“Parents may not know how their city or county communicates the results of water testing,” Clark says. “Rather than assume, parents should seek out water safety information through their local government website or their community’s water treatment plant.”

Higher-income parents were substantially more likely than those from lower-income households to say their home tap water has been tested and is safe (80% versus 62%.) Clark points to several potential factors, including that lower-priced housing may have old water lines and plumbing, and because poorer communities may have limited funding for water system upgrades.

State and federal regulations establish specific requirements for water testing, but in many cases, parents may not have thought to look for this information, Clark says. Even when parents seek out information about water safety, parents may not know where test results are posted or may not understand the technical language used in water testing reports.

Clark also notes that testing of the public water supply tests might not detect contamination that occurs within the home, such as from lead pipes, so some parents choose to do additional testing. Families relying on residential well water also should do additional testing, she says.

In homes where the water has tested as unsafe, a filter attached to the faucet may be sufficient to remove a contaminant like lead, she says. In cases where home tap water meets water quality standards, parents may use a water filter to improve taste.

However, some home treatment systems remove elements from water that actually improve public health and safety.

“Parents don’t want to make a decision that offers little benefit, and the possibility of reduced health and safety,” Clark says.

Water safety has been in the spotlight over recent years after news of the Flint water crisis in Flint, Mich. that started in 2014 and exposed residents, including children, to lead in the water.

The U.S. Environmental Protection Agency recommends that schools test their drinking water for lead to confirm it is safe for students, but there aren’t any universal requirements to do so.

In the absence of testing, bottled water can also be a solution, Clark says.