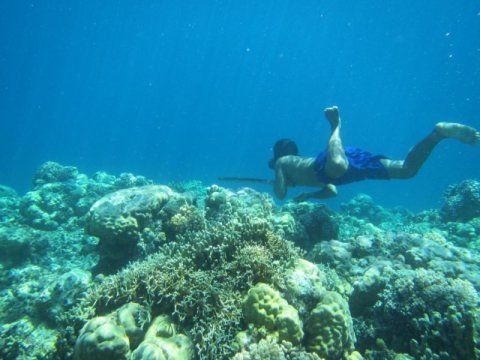 The Bajau people of Southeast Asia, known as Sea Nomads, spend their whole lives at sea, working eight-hour diving shifts with traditional equipment and short breaks to catch fish and shellfish for their families. In a study published April 19 in the journal Cell, researchers report that the extraordinary diving abilities of the Bajau may be thanks in part to their unusually large spleens. The adaptation, the researchers say, is a rare example of natural selection in modern humans — and one that could provide medically relevant insight into how humans manage acute hypoxia.

Spleen size is significant because of the organ’s role in the human dive response, which occurs when our faces are submerged in water and we hold our breath. As our heart rate slows and blood vessels in our extremities constrict, the spleen contracts, releasing oxygenated red blood cells and making more oxygen available in the bloodstream. A larger spleen means that more oxygen gets released. Perhaps for this reason, large spleens have also been documented in diving seals.

The Bajau having larger spleens than their non-diving neighbors suggested that their diving culture had shaped their physiology. But the fact that non-divers and divers both had larger spleens suggested that it wasn’t just a plastic response to spending so much time under water. There was likely something different about the Sea Nomads’ DNA.

When the researchers scanned the genomes of the Bajau, they identified 25 sites that differed significantly from two comparison populations, the Saluan and the Han Chinese. Of these, one site on a gene known as PDE10A was found to be correlated with the Bajau’s larger spleen size, even after accounting for confounding factors like age, sex, and height. In mice, PDE10A is known for regulating a thyroid hormone that controls spleen size, lending support for the idea that the Bajau might have evolved the spleen size necessary to sustain their long and frequent dives.

“The chance of finding evidence of population-specific natural selection, even in a population as extreme as the Bajau, was pretty slim. It was very exciting to find, and it just opens up so many possibilities,” says Ilardo.

Understanding how the human body responds to a lack of oxygen, for instance, is important in a lot of medical contexts, from chronic obstructive pulmonary disease to surgery. Hypoxia has been well studied in populations living at high altitudes, where the lack of oxygen is much more chronic. But not as much research has been done on diving populations. “Here it’s more of an acute hypoxia, almost similar to what’s experienced with sleep apnea,” she says. By making their data freely available to other researchers, she and her co-authors hope that some of what they’ve learned from the Bajau can be applied in medical contexts.

For the Bajau, Ilardo believes that the decision to participate in this research is about better understanding themselves. “I basically just showed up at the house of the chief of the village, this bizarre, foreign girl with an ultrasound machine asking about spleens,” she says. “They’re the most welcoming people I’ve ever met, but I wanted to make sure that they understood the science behind what I was doing, so that it wasn’t just me taking measurements from them without giving back. And we do have a trip planned to return to the community to explain the results to them.”

“They’re explorers, so I think they’re inherently curious and want to know more about the world, including about their own biology,” she says.

Ilardo also believes her research has implications for how we think about natural selection in modern humans. “I think it’s fascinating to see just how extraordinary this population is, to think that they’re almost like superhumans living among us with these really extraordinary capabilities. But I also think natural selection is a lot more powerful than we sometimes give it credit for, and maybe we should be looking for it in more places than we thought.”