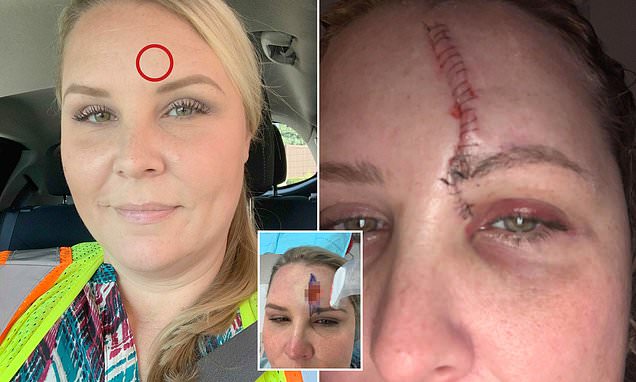 Tanning addict mother, 38, gets skin cancer and is left with a four-inch scar on her forehead after using sunbeds three times a week for a decade

A mother-of-one suffered from skin cancer and was left with a four-inch scar on her forehead after she used sunbeds three times a week for a decade.

Between the ages of 16 and 25, Carrie Searcy, now 38, used sunbeds to achieve the ‘model tan’ she saw in magazines.

But more than 10 years later Ms Searcy from Kentucky, noticed a white spot on her forehead which beauty treatments failed to get rid of.

A visit to her dermatologist ended up in her being diagnosed with a type of skin cancer called basal cell carcinoma, which she had to have surgery to remove.

The six-hour operation removed a coin-sized chunk of her forehead to clear her of the cancer, leaving Ms Searcy with a huge scar on her face.

Now recovered, Ms Searcy is sharing her experience to warn others about the dangers of using sunbeds. 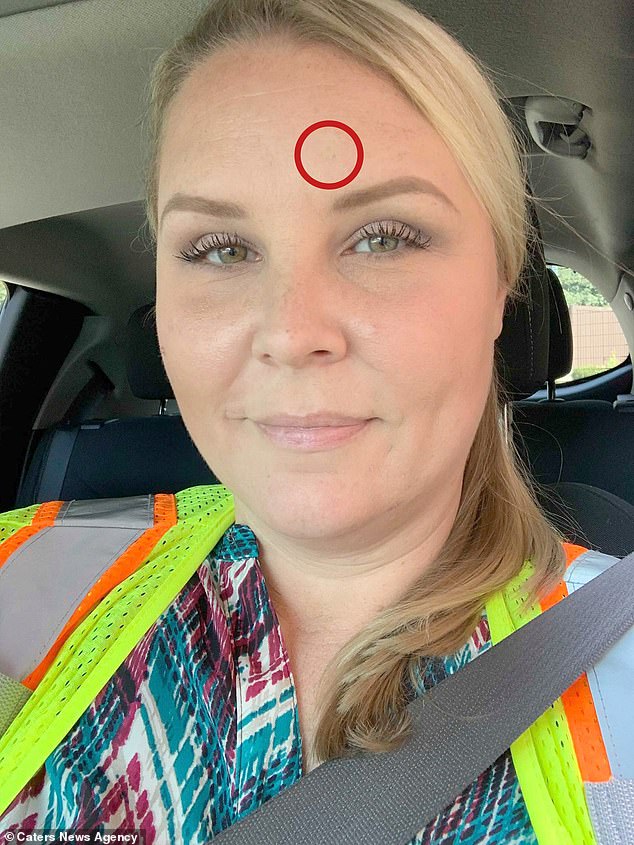 A mother-of-one is begging strangers not to use sunbeds after she claimed nine years of using a tanning bed left her with deadly skin cancer. Pictured: Ms Searcy before her operation with a white spot on her forehead (circled) which later turned out to be cancerous 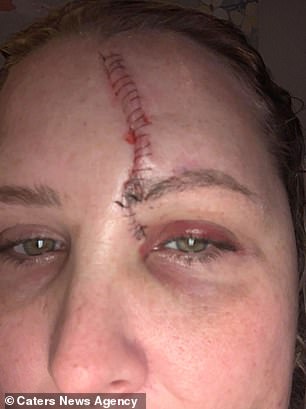 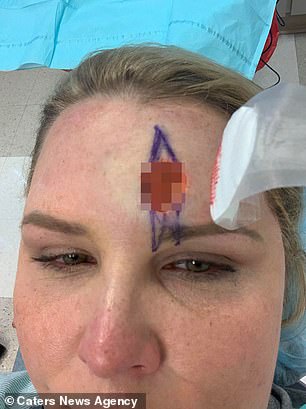 Carrie Searcy, 38, said she used sunbeds up to three times a week to achieve the ‘model tan’ she saw in magazines (Pictured left and right: Ms Searcy recovering from her operation)

‘For nine years I was obsessed with looking as tanned as I could,’ she said. ‘I would go on sunbeds three times a week and never wear suncream.

‘I would see models in magazines or on TV and think that was how tanned I needed to be, so would do whatever it took to get there.

‘But then a couple of years ago I noticed a white spot on my forehead and it started to get bigger, whiter and waxy looking.

‘I’d tried everything I could think of to treat it myself but I think deep down I knew what it was, so last month I went to see a dermatologist.

‘She gave me the biopsy results and told me I had basal cell carcinoma and that I would have to have surgery on my face to remove it.’

Basal cell carcinomas (BCC) make up more than 80 per cent of all forms of skin cancer in the UK, with over 100,000 new cases being diagnosed every year.

There are also an estimated 4.3million cases in the US each year.

BCC cases are mainly caused by exposure to UV light from the sun or tanning beds, and it most commonly developed on exposed areas like the face, neck or ears.

Having always been image conscious, Ms Searcy said she was heartbroken that she would be left with a scar on her face.

The cancer is rarely dangerous because it doesn’t spread, and it can nearly always be removed with surgery, the treatment of choice.

She said: ‘The spot was about the size of my fingertip so I honestly thought the surgery would be fine, but the nurse told me that cancer is like an iceberg – it’s always bigger under the surface.

‘They ended up cutting out a chunk about the size of a quarter [coin].’ 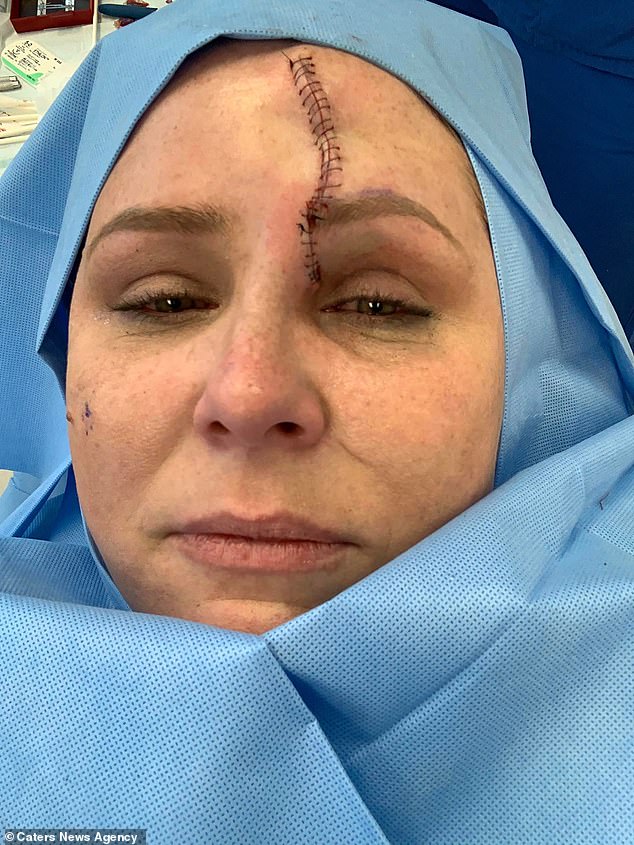 The US woman now is sharing her story to advise strangers not to put themselves at risk by using sunbeds just to appear more tanned. (Pictured: The mother shortly after her procedure) 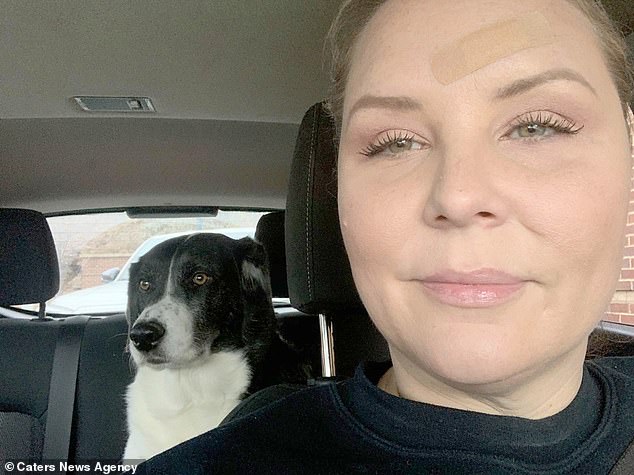 Ms Searcy said: ‘For nine years I was obsessed with looking as tanned as I could – I would go on sunbeds three times a week and never wear sun cream’ (Pictured: Ms Searcy covered the white spot with a plaster before her operation) 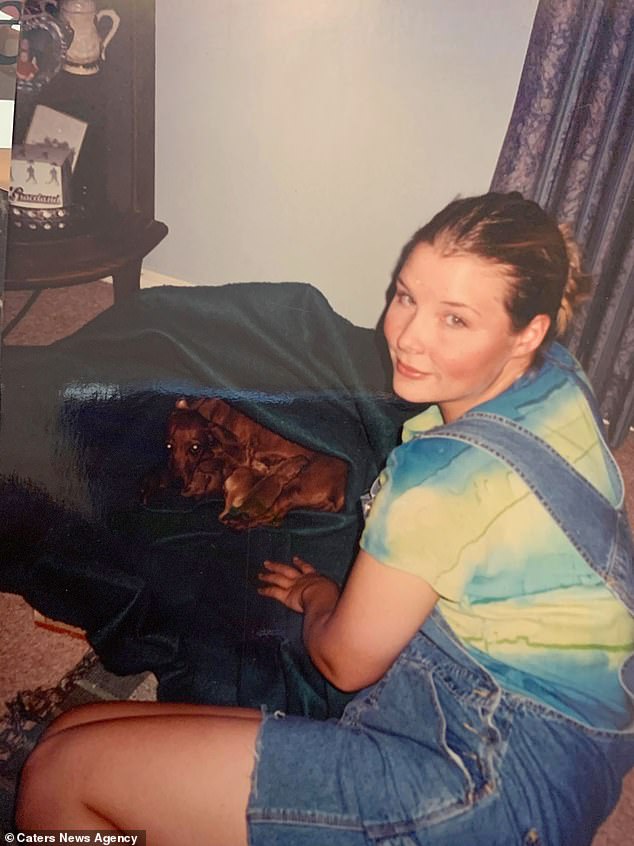 Having always been image conscious, Ms Searcy said she was left heartbroken that she would have a scar on her face. Pictured before her ordeal

The surgeons had to slice out the bits of cancer which were visible and also check to see if it had spread elsewhere and remove that as well.

‘They’d take the area they thought was the cancer spot and then check it under a microscope to see if there were any cancer cells connecting to the skin the left,’ Ms Searcy said.

‘They did that twice and after the second time they said it was all clear.

‘When I saw the stitches I was terrified – I cried and cried because I realised just how big the scar was and, in turn, how much cancer there must have been.

‘There are two layers of stitches in my wound and the top ones come out next week, whilst the ones underneath will dissolve.

‘This whole experience has shown me that tanning isn’t worth it – there are safer alternatives to achieve the tanned look and sunbeds or sun exposure are not necessary.’

WHAT IS BASAL CELL CARCINOMA?

Non-melanoma means it does not involve skin pigment cells.

BCC makes up more than 80 per cent of all forms of skin cancer in the UK, with over 100,000 new cases being diagnosed every year.

It is mainly caused by overexposure to UV light from the sun or tanning beds.

BCC can occur anywhere on the body but is most common on areas exposed to the sun, such as the face, neck and ears.

The following people are most at risk:

BCC is usually painless. Early symptoms often only include a scab that bleeds occasionally and does not heal.

Some appear as flat, red, scaly marks or have a pearl-like rim. The latter can then erode into a ulcer.

Others are lumpy with shiny nodules crossed by blood vessels.

Most BCCs can be cured, however, treatment is complex if they are left for a long time.

Treatment usually involves removing the cancerous tumour and some of the surrounding skin.