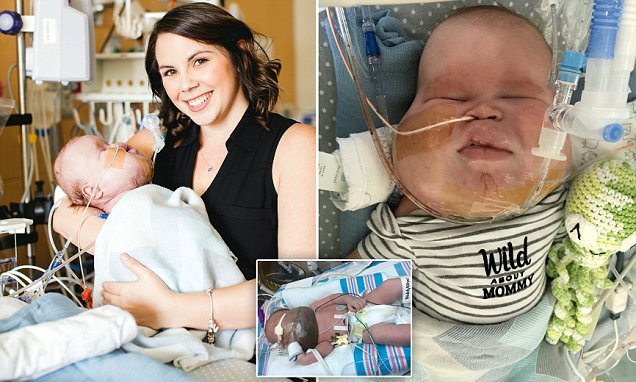 Mother, 27, who longs to hear her baby cry: Three-month-old son was born with hundreds of cysts covering his face that stop him making a sound

A mother whose baby was born with hundreds of cysts covering the lower half of his face dreams of the day she will hear her son cry for the first time.

Victoria Silvestri, 27, discovered her son Gavin, now three months, suffered from cystic hygroma, which has left him with fluid-filled lumps in his cheeks, chin, lips and neck, during a scan when she was 18 weeks pregnant.

Ms Silvestri gave birth alone after going into labour a week early while her husband was in another state, forcing him to watch his son being born on FaceTime.

After Gavin’s birth, the newborn was rushed to intensive care in Nicklaus Children’s Hospital, Florida, where he has remained for all of his short life.

The youngster has endured intensive treatment, including seven-hour surgery to remove dead tissue from his face.

He is unable to make a sound due to a device in his windpipe to help stabilise his breathing.

Although Gavin faces many more procedures before he is fit and healthy, his parents hope he will be well enough to finally go home next month. 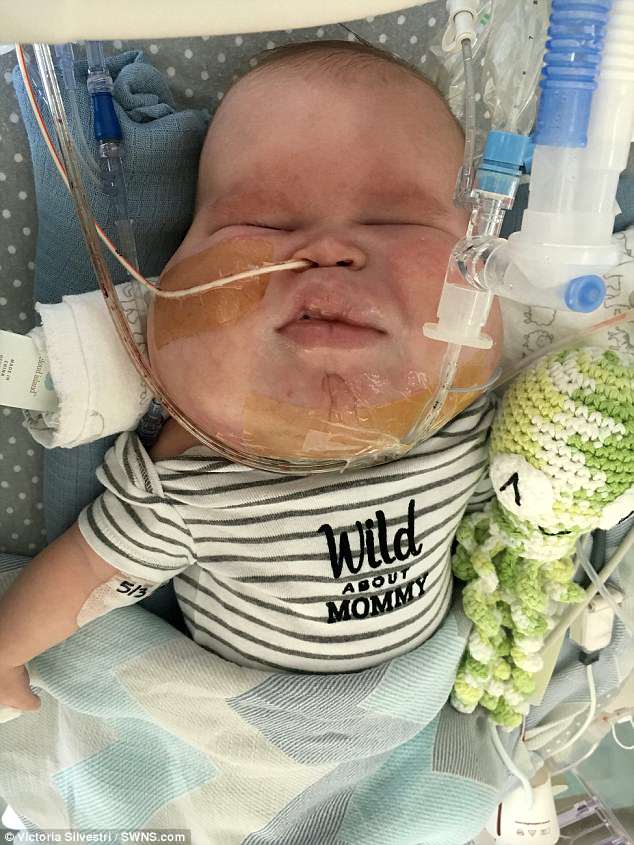 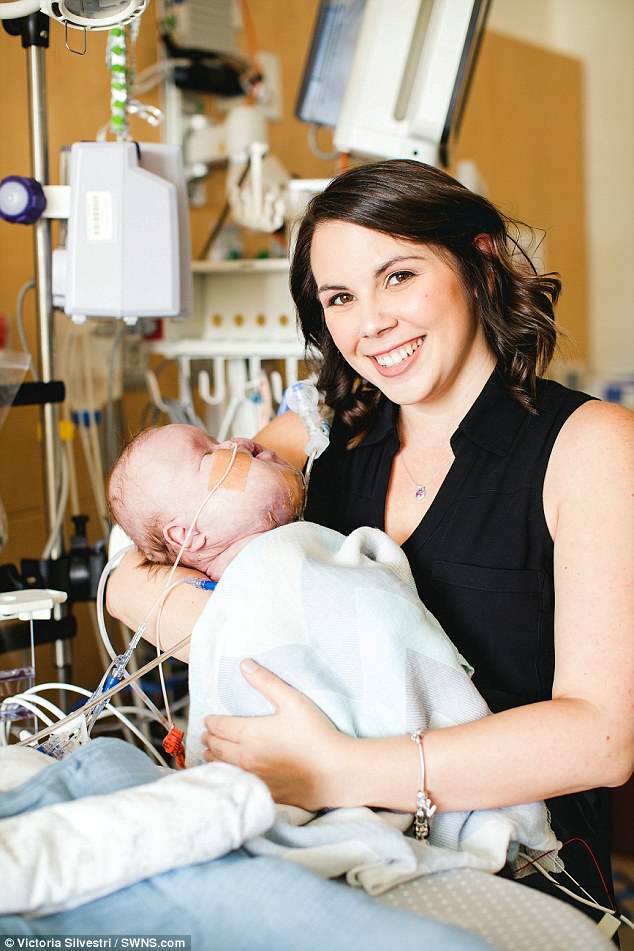 Due to a breathing tube in his windpipe, Victoria Silvestri has never heard her son cry 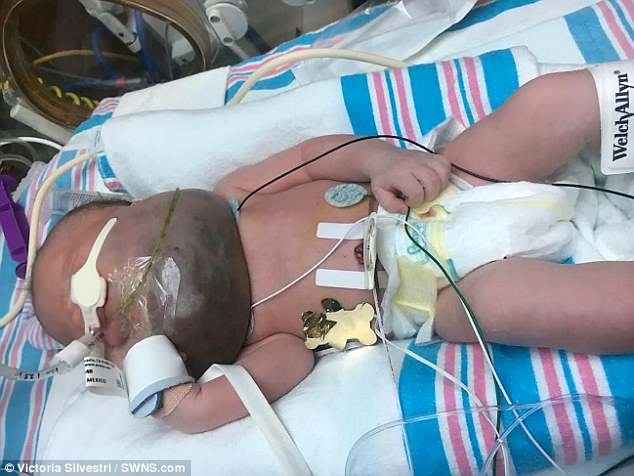 ‘I have never once heard Gavin cry’

Ms Silvestri was scheduled for a Caesarean section on February 8 but went into labour early while her husband Joe Silvestri, 27, a college basketball coach, was at an away game.

She said: ‘While I was in delivery there were about 30 doctors and nurses in the room. I felt like I was on an episode of Grey’s Anatomy.

‘Although it was high risk, everything went as it was supposed to go.

‘When I saw him, I wasn’t shocked. I had prepared myself from the moment I found out Gavin had this condition.

Gavin’s cysts also formed around his windpipe in the womb, which restricted his airways, leading to him being fitted with a breathing tube during Ms Silvestri’s c-section.

She said: ‘He’s been in the NICU since he was born and it hasn’t been easy.

‘A lot of mums take for granted bringing home a newborn.

‘It can be hard when people talk about the sleepless nights with a crying baby because I have never once heard Gavin cry, because he can’t.

‘He tries, but he can’t. We take it day by day but it will be special when he laughs or when I hear him cry.’ 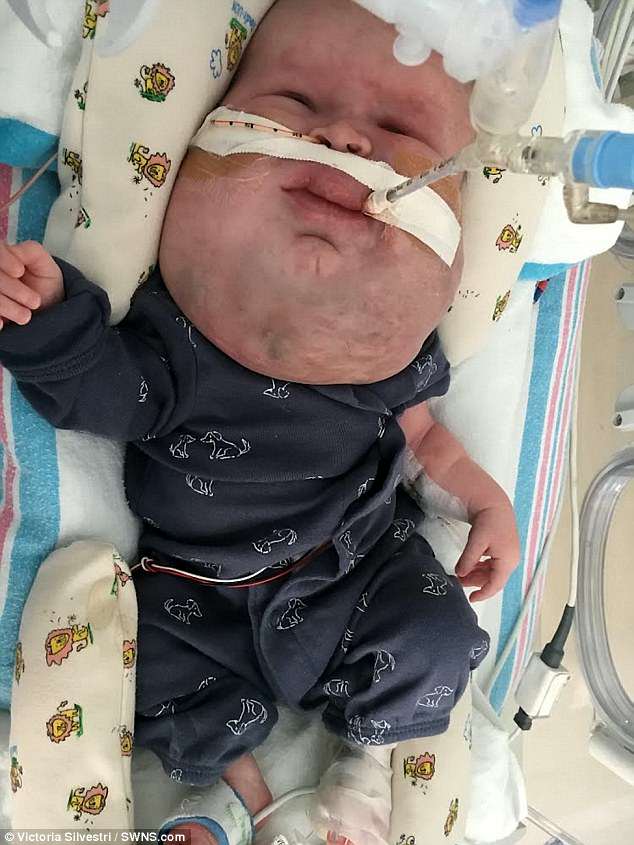 A rare condition has left Gavin with fluid-filled lumps in his cheeks, chin, lips and neck 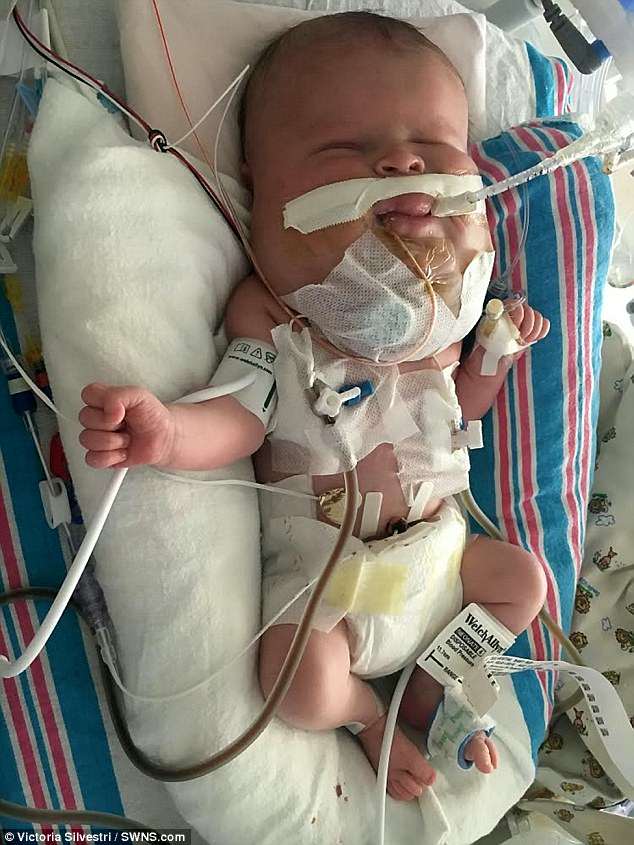 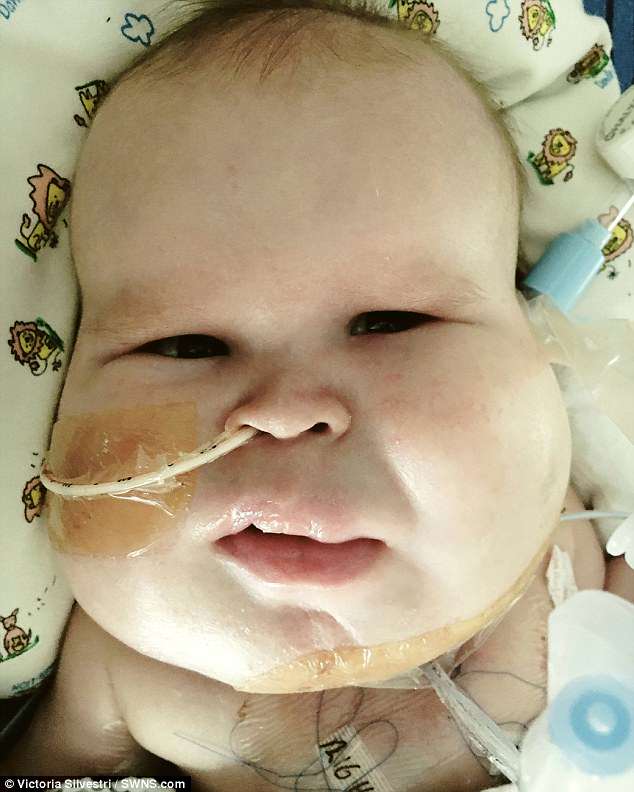 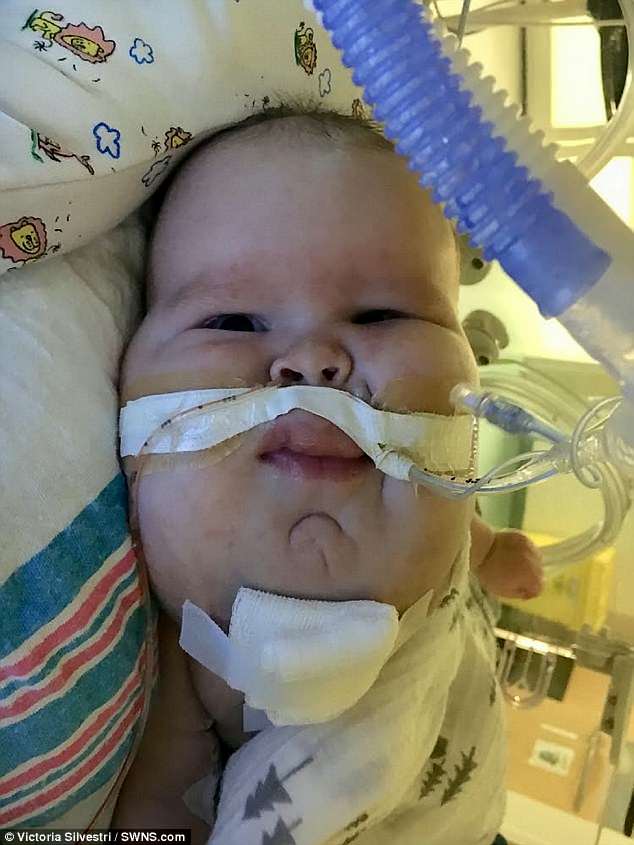 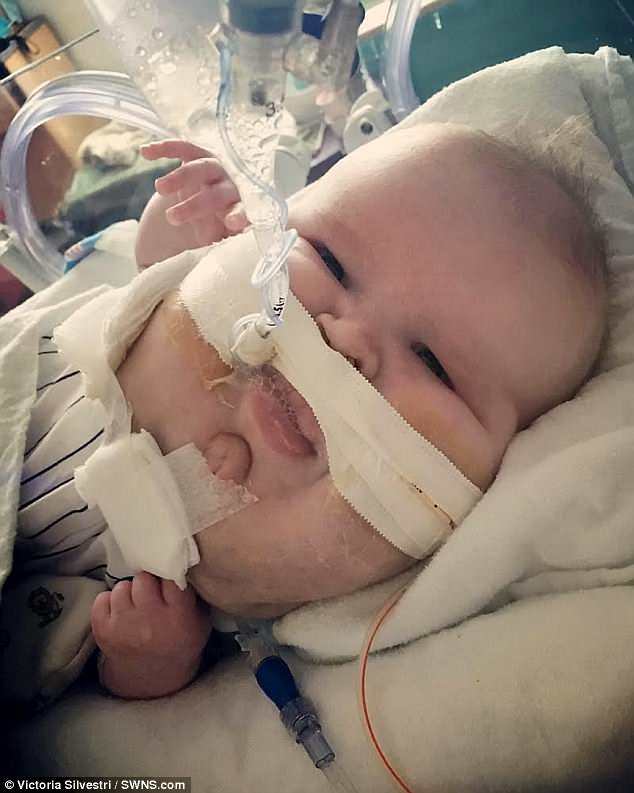 ‘He’s such a little warrior’

Gavin’s medical team are waiting for an incision from his previous surgery to heal before they decide the next course of action.

Ms Silvestri said: ‘Our main focus right now is getting his incision healed but hopefully he can be fitted with a trach which would maybe allow us to take him home for the first time.’

A trach is a short tube inserted directly into a patient’s windpipe to help them breathe.

Ms Silvestri added: ‘I can’t wait. I go home for a few hours every so often and I go into his room and I just can’t wait for him to be in it.

‘Everything is here and ready for him.’

Speaking of what Gavin has endured in his short life, she said: ‘He’s such a little warrior, it’s amazing. He’s such a calm baby, and he’s not at all fussy.’

‘I was lucky to meet a mum who had a baby with the same thing as Gavin a few months ago and he was thriving. It gives me hope.

‘Although we are taking each day as it comes, it will be wonderful to get back to our lives with our wonderful baby.’ 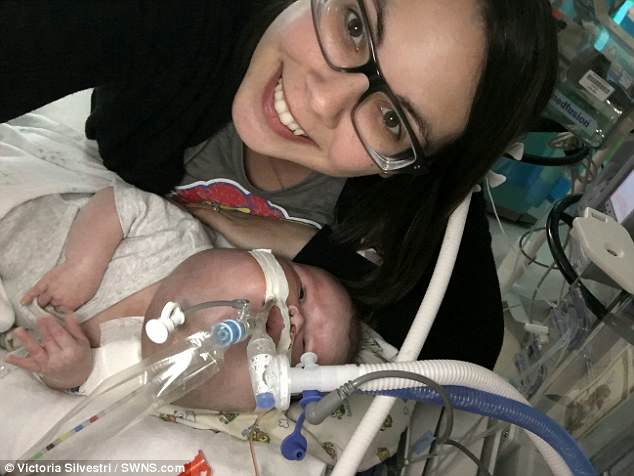 Despite what Gavin has endured, Ms Silvestri insists he is a calm baby and a ‘little warrior’ 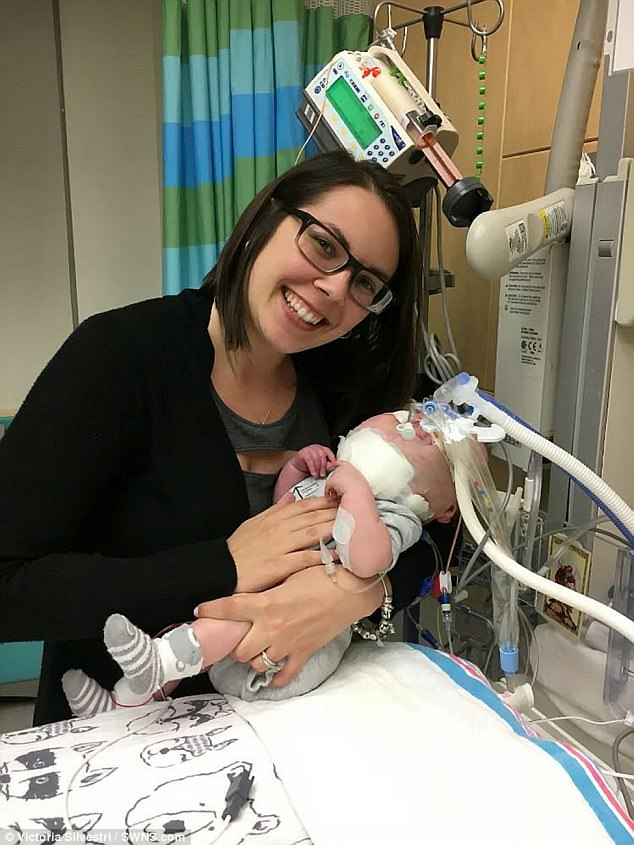 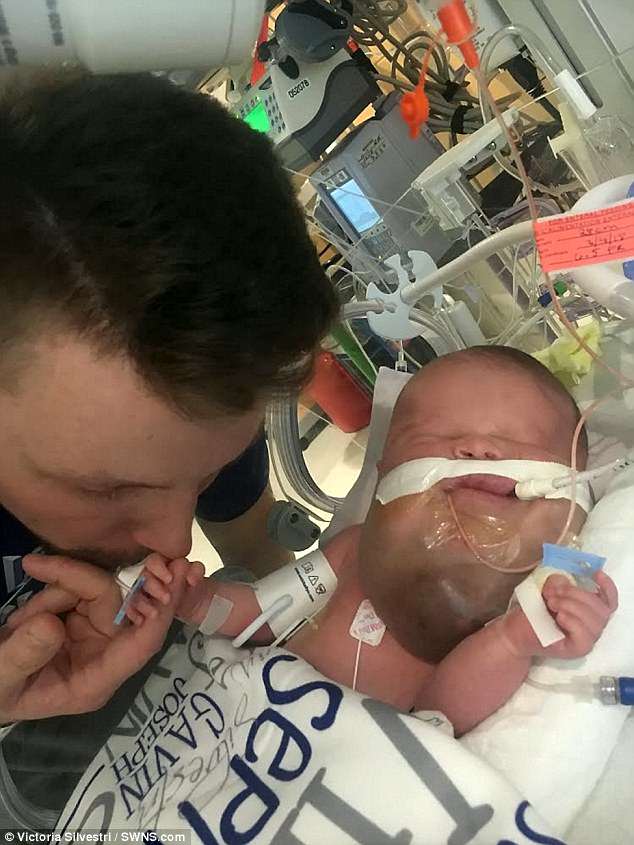 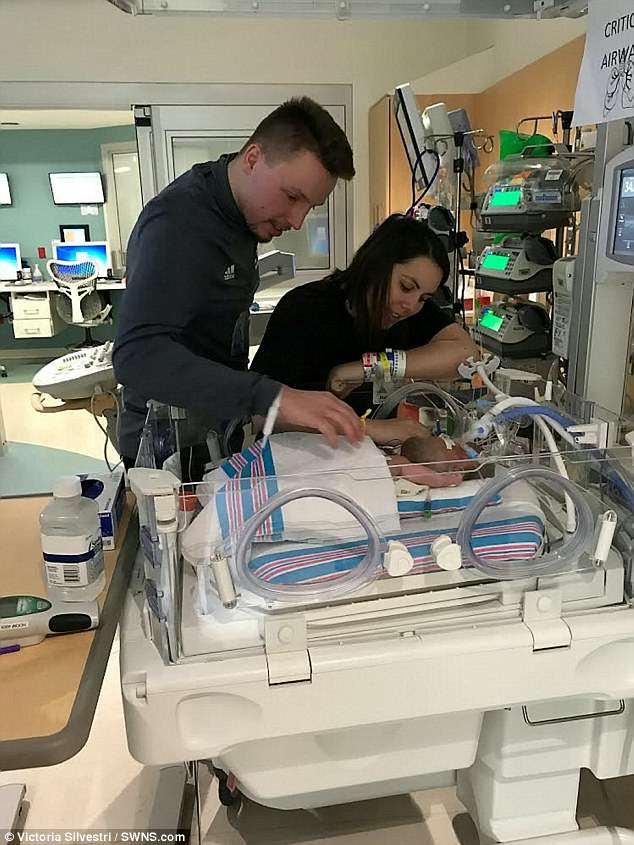 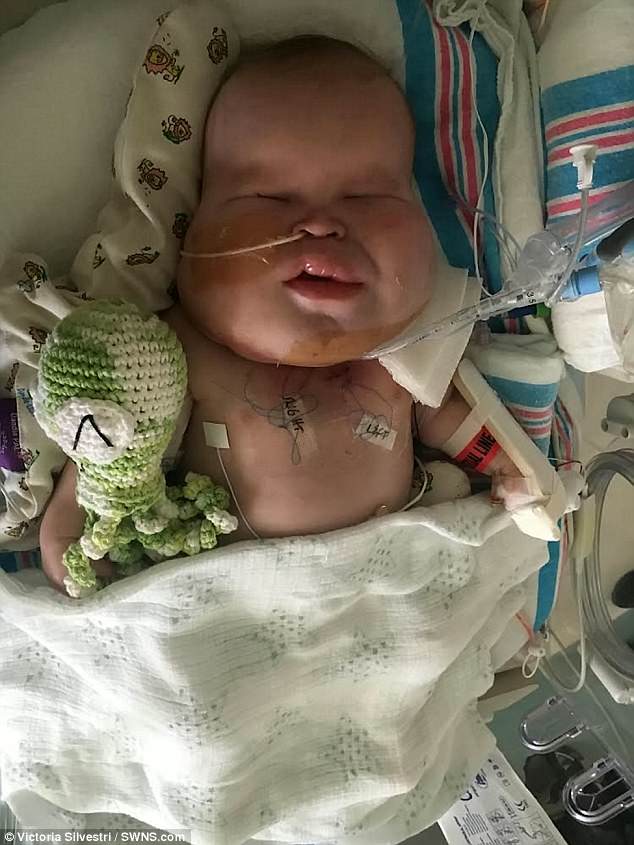 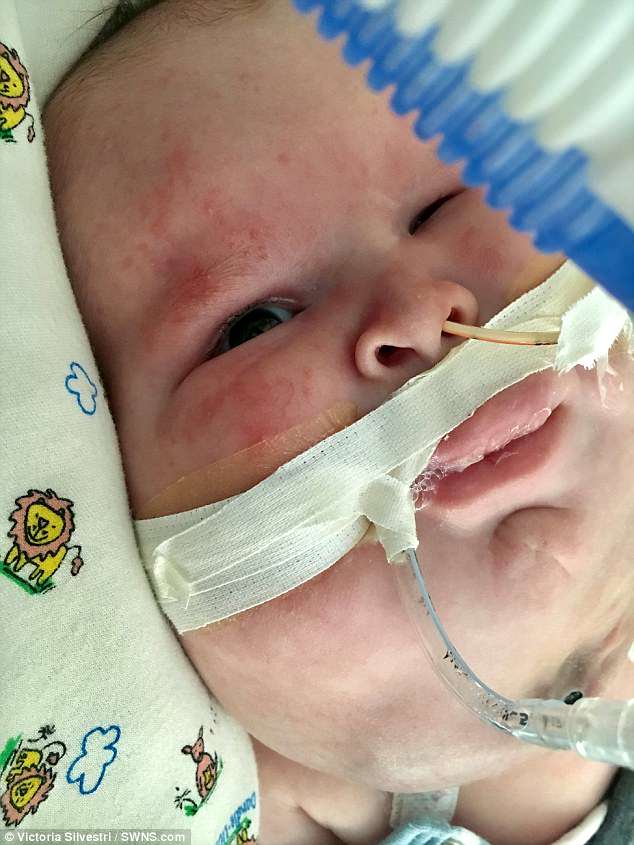