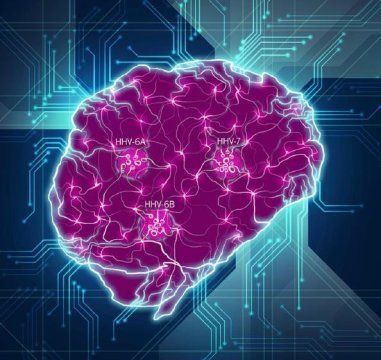 The quest to understand what causes Alzheimer’s disease — and to treat it — is complicated by the disease’s long, slow progression and the difficulty of collecting brain tissue samples. But in a large-scale analysis published June 21 in the journal Neuron, researchers at the Icahn School of Medicine at Mount Sinai use data from three different brain banks to suggest that human herpesviruses are more abundant in the brains of Alzheimer’s patients and may play a role in regulatory genetic networks that are believed to lead to the disease. This work lends support to the controversial hypothesis that viruses are involved in Alzheimer’s disease and offers potential new paths for treatment.

“The title of the talk that I usually give is, ‘I Went Looking for Drug Targets and All I Found Were These Lousy Viruses.’ We didn’t set out to find what we found. Not even close. We were trying to find drugs that could be repurposed to treat Alzheimer’s patients, but the patterns that emerged from our data-driven analysis all pointed towards these viral biology themes,” says co-senior author and geneticist Joel Dudley. who is also a member of the ASU-Banner Neurodegenerative Disease Research Center.

The researchers analyzed data from three major brain banks courtesy of the National Institutes of Health’s Accelerating Medicines Partnership — Alzheimer’s Disease (AMP-AD) consortium, which allowed them to look at raw genomic data for large numbers of Alzheimer’s patients in different cohorts. They constructed, mapped, and compared regulatory gene networks in areas of the brain known to be affected by Alzheimer’s on multiple levels, looking at DNA, RNA, and proteins.

“This kind of analysis was only possible because the consortium had coordinated for all of these other groups to put their sequencing data in the AMP-AD Knowledge Portal in a precompetitive environment that let us very quickly replicate our work across all these different cohorts. We needed access to sequences that are usually discarded in the course of studying the human genome. We needed to search for sequences from hundreds of different viruses, so having access to that raw, unprocessed data was absolutely key,” says first author Ben Readhead.

They found that human herpesvirus DNA and RNA were more abundant in the brains of those diagnosed postmortem with Alzheimer’s disease and that abundance correlated with clinical dementia scores. And the two viruses they found to be most strongly associated with Alzheimer’s, HHV-6A and HHV-7, were not as abundant in the brains of those with other neurodegenerative disorders. When they constructed networks that modeled how the viral genes and human genes interacted, they were able to show that the viral genes were regulating and being regulated by the human genes — and that genes associated with increased Alzheimer’s risk were impacted.

“Previous studies of viruses and Alzheimer’s have always been very correlative. But we were able to do statistical causal inference testing and more sophisticated analysis, which allowed us to identify how the viruses are directly interacting with or coregulating or being regulated by Alzheimer’s genes. I don’t think we can answer whether herpesviruses are a primary cause of Alzheimer’s disease. But what’s clear is that they’re perturbing networks and participating in networks that directly accelerate the brain towards the Alzheimer’s topology,” says Dudley.

The researchers believe that their findings align with other current research in the Alzheimer’s field on the role of innate immunity in the disease, particularly recent findings that beta-amyloid protein — the culprit behind the plaques that build up in the Alzheimer’s-affected brain — may accumulate as part of a defense against infections. In their study, they found that herpesviruses were involved in networks that regulate amyloid precursor proteins.

They argue, however, that their work shouldn’t make anyone worried. “While these findings do potentially open the door for new treatment options to explore in a disease where we’ve had hundreds of failed trials, they don’t change anything that we know about the risk and susceptibility of Alzheimer’s disease or our ability to treat it today,” says co-senior author and Alzheimer’s disease specialist Sam Gandy.

This is especially true because HHV-6A and HHV-7 are extremely common and often latent or asymptomatic: in North America, almost 90% of children have one of these viruses circulating in their blood by the time they’re a few years old. “There are still a lot of unanswered questions around how we go from being able to detect it circulating in someone’s blood to knowing whether it’s active in a state that might be relevant to Alzheimer’s disease,” says Readhead.

But even if questions remain, this research offers strong support for a long-controversial hypothesis that viruses might be involved in the development of Alzheimer’s disease. “We didn’t have a horse in this virus race whatsoever. It’s the data that took us there. And now, not only is the viral hypothesis resurrected: it has specific testable pathways and networks and interactions that can be explored and reconciled with the rest of the work emerging in Alzheimer’s,” says Dudley.

“All these Alzheimer’s brains in these separate, major brain banks have previously unsuspected substantial populations of herpesvirus genomes and that deserves an explanation wherever it falls in the pathogenesis. It doesn’t deserve to just be brushed away,” says Gandy.