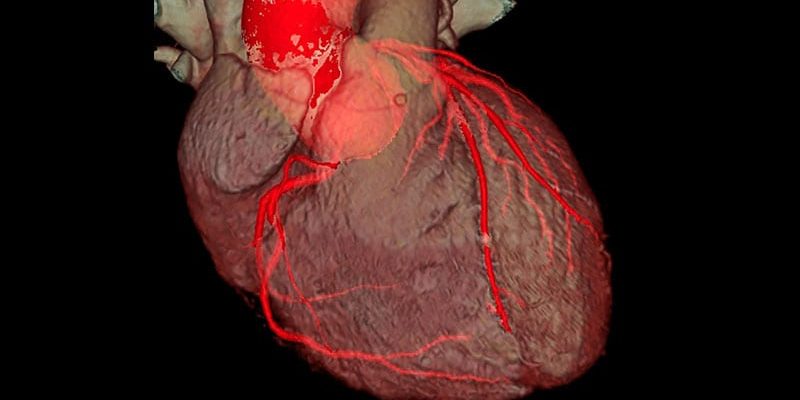 The GREECE trial was aiming to show that doses of contrast and radiation were lower for the patients who received CCTA before invasive angiography, but the study showed that doses were actually higher in the combination imaging group. But this did not affect the main safety endpoint ― contrast-induced nephropathy ― for which rates were comparable between the two arms. In addition, the procedure time was significantly shorter in the combination imaging group.

The interim results of the GREECE study were presented by Grigorios Tsigkas, MD, from Patras University Hospital, Greece, at the Congress of the European Association of Percutaneous Coronary Interventions (EuroPCR) 2022, being held this week in Paris.

Taking into account the high diagnostic accuracy of the noninvasive CCTA in detecting or excluding stenosis or occlusion of CABG grafts, the researchers hypothesized that use of CCTA to assess the grafts could reduce the procedure time needed for invasive coronary angiography and reduce fluoroscopy time and periprocedural complications.

Tsigkas explained that, at present, CCTA does not provide adequate diagnostic accuracy for native coronary arteries, so invasive coronary angiography would still be required for evaluation of these arteries.

“The general thought is that invasive coronary angiography would be useful in native coronary arteries evaluation, while CCTA would be better for graft assessment, and using the combination should cut down exposure to the invasive procedure,” he said.

Tsigkas presented results from the first 153 patients, which was about half of the planned enrollment.

But Tsigkas noted that this did not affect the safety endpoint ― contrast-induced nephropathy ― which was comparable between the two arms.

The intervention was also associated with significantly less procedure time (28 min vs 38 min).

Asked how the combination approach may lead to lower event rates, Tsigkas replied that no conclusions about this can be reached until completion of the trial.

But he added: “Taking into consideration the existing outcomes, I believe that the experimental arm, which is a staged approach for these patients, may give the opportunity to the interventional cardiologist to choose more wisely the optimal management. This could be associated with the reduced number of PCI procedures in the experimental arm.”

Tsigkas commented: “We firmly believe that our study will have a noteworthy impact in the management of CABG patients. CCTA could gain more ground as the first diagnostic approach in stable patients with complex CABG surgical procedure, and this approach could be beneficial for patients with unknown anatomy and without a surgical report. A CCTA report could guide interventional cardiologists to perform elective angiography instead of searching grafts.”

The final results will provide guidance toward conducting more focused research in this population, he said, “trying to identify the patients getting more benefit with the combination of CCTA and invasive coronary angiography.”

Tsigkas also pointed out that CCTA in this trial is performed mainly in 64- or 128-slice CT scanners, but newer machines (CT 512-slice scanners) “could increase the diagnostic accuracy, could decrease dramatically the radiation dose, the examination time, and improve the convenience of patients undergoing CCTA.”

Widimsky suggested that a different design may be one in which the experimental group receives only CCTA as a single, noninvasive, planned procedure, with invasive coronary angiography undertaken only for a selected subgroup of patients in whom combination of clinical presentation and CCTA does not provide a clear decision about a PCI indication.

“With such study design, there would be greater chance to obtain a positive result for the experimental arm,” he said.

Tsigkas responded: “Unfortunately, at the present time, CCTA is not as reliable as invasive coronary artery for native disease assessment; thus, we could not restrict the protocol to CCTA alone.”

He added that a previous nonrandomized study supports the idea of the current combination approach being tested here in terms of contrast and radiation dose, adding that “although patients undergo two rather than one angiography, the invasive one at least lasts significantly less time.”

Congress of the European Association of Percutaneous Coronary Interventions (EuroPCR) 2022: Presented May 17, 2022.