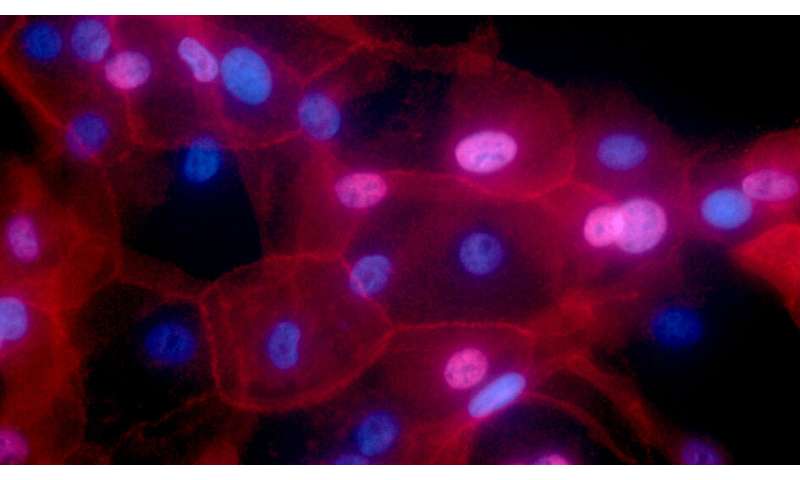 Testing women’s response to hormone therapy for breast cancer given around the time of surgery could be a fast and cheap way of predicting how likely the disease is to come back, a major clinical trial has found.

Researchers found that a test to measure how the growth rate of cancer cells changed two weeks after starting treatment with a type of hormone therapy strongly indicated whether a woman’s cancer was any more likely to return.

The test could provide reassurance for women likely to do well on standard treatment—often hormone therapy alone after surgery and radiotherapy—and identify those at an increased risk of relapse, who could be offered additional treatment or the chance to enter clinical trials.

Studying the benefit of hormone therapy before surgery

The results of the large-scale clinical trial offer definitive evidence for the benefit of testing response to drugs called aromatase inhibitors—which suppress estrogen levels—to guide treatment decisions for women after they have had surgery.

The results of the POETIC trial, published in The Lancet Oncology and funded by Cancer Research UK, could in future change clinical practice in the NHS.

A team at The Institute of Cancer Research, London, and The Royal Marsden NHS Foundation Trust, studied 4,480 women with early-stage, hormone-positive breast cancer, two-thirds of whom were given one of the aromatase inhibitors, letrozole or anastrozole, for two weeks before and after their surgery.

The remaining women were treated with surgery and received the aromatase inhibitors at the usual time—only after surgery. All women were recommended to continue on their hormone treatment for at least five years as part of their standard care.

Most women who have hormone receptor-positive breast cancer receive hormone therapy such as aromatase inhibitors for five years, which helps to reduce the risk of breast cancer coming back.

The POETIC trial sought to find out if receiving aromatase inhibitors for two weeks before surgery, instead of starting it after surgery, helped reduce the risk even further.

How changes in Ki67 affect the risk of relapse

It also aimed to assess the value of a marker of cancer cell growth for predicting women’s response to aromatase inhibitors.

The researchers compared the levels of a protein called Ki67 in tumor samples taken when women were first diagnosed, and two weeks after they had started treatment with an aromatase inhibitor.

In those women who received aromatase inhibitors before surgery, researchers were able to analyze how changes in Ki67 affected the risk of their cancer coming back. They found that just 4 percent of women in this group, whose levels of Ki67 were low to start with and remained low after starting treatment, saw their breast cancer come back five years after surgery.

Of the women whose Ki67 started out high, 22 percent of those whose Ki67 remained high after starting treatment saw their cancer return within five years, compared with 8 percent of women whose tumor samples showed low Ki67 levels after the two weeks’ treatment.

The trial found no significant change in the risk of women’s cancer coming back whether or not they had received an aromatase inhibitor two weeks before their surgery.

Despite the results not showing a reduction in risk, this finding is important as it means that women can be safely started on aromatase inhibitors immediately after being diagnosed with early-stage breast cancer—which has proved particularly beneficial during the COVID-19 pandemic while there were some delays in surgery.

The results offer the strongest evidence yet for the value of giving women a short-term course of aromatase inhibitors around the time of their surgery combined with the relatively cheap test needed to measure Ki67 levels in tumor samples.

As measuring Ki67 levels is much cheaper than other, gene-based tests to assess treatment response, the researchers believe that their test could easily be incorporated into routine practice on the NHS.

Picking out patients at higher risk

“Our study suggests that many more women with early-stage, hormone-positive breast cancer should be offered treatment with aromatase inhibitors around the time of their operation, as it has the important benefit of also helping us pick out those patients at higher risk of their cancer coming back.

“Instead of more expensive genetic testing, measuring the growth response of cancer cells to aromatase inhibitors could be a low-cost way to pick out those women who are likely to do well on standard treatment, and those who should be considered for clinical trials. And with aromatase inhibitors being a well-established treatment, the test should be relatively straightforward to bring into standard practice in the NHS.”

“This important trial is the largest of its kind in the world and involved around 4,500 patients in 130 NHS Breast Units throughout the UK. We have shown that giving patients with early breast cancer two weeks of simple endocrine therapy using aromatase inhibitor tablets before surgery allows us to determine what is the most appropriate medical treatment after surgery for each individual patient. In particular, it helps us identify which patients could avoid chemotherapy with all its unpleasant toxicities. The test is much cheaper and easier than current genomic tests, and we believe it should become part of the standard treatment for early breast cancer.”