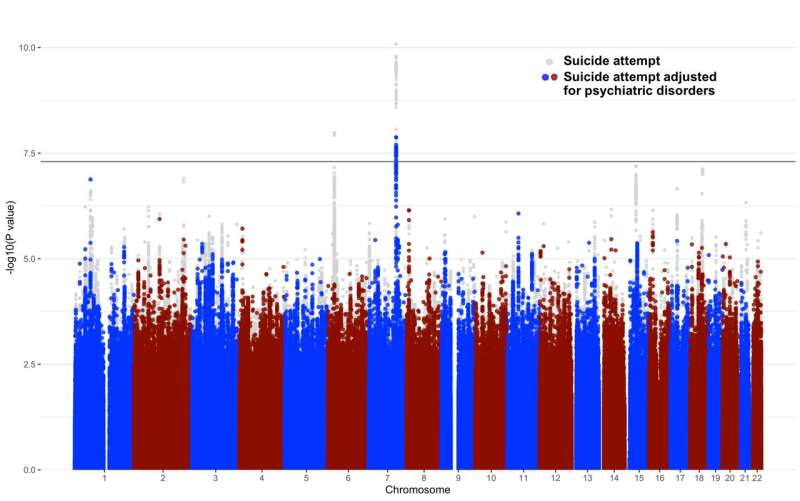 In the largest genetic study of suicide attempts to date, researchers have identified a region of the genome on chromosome 7 containing DNA variations that increase the risk that a person will attempt suicide.

The study also found overlap in the genetic basis of suicide attempts and that of related psychiatric disorders, particularly major depression, and also with that of non-psychiatric risk factors such as smoking, risk-taking behavior, sleep disturbances, and poorer general health. The study results, published November 30 in Biological Psychiatry, suggest that the genetic underpinnings of suicide attempts are partially shared and partially distinct from those of related psychiatric disorders.

Suicide is a worldwide public health problem, accounting for almost 800,000 deaths per year. Non-fatal suicide attempts are estimated to occur more than 20 times for every death by suicide and are a major source of disability, reduced quality of life, and social and economic burden. Suicidal thoughts and behaviors can be reduced with proper mental health support and treatment. Therefore, it is critical to gain insight into the underlying biological pathways involved in suicide attempts or suicidal thoughts, which could provide potential avenues to treatment and prevention strategies.

“In addition to identifying the risk location for suicide attempt on chromosome 7, we uncovered a strong overlap in the genetic basis of suicide attempt and that of psychiatric disorders, particularly major depression, as well as some overlap with the genetics of smoking, pain, risk-taking, sleep disturbances, and poorer general health,” said Niamh Mullins, Ph.D., Assistant Professor of Psychiatric Genomics at the Icahn School of Medicine at Mount Sinai, co-founder and co-chair of the consortium, and lead author of the paper. “This genetic overlap with non-psychiatric risk factors was largely unchanged by adjusting for psychiatric disorders, which suggests that a substantial component of the biological basis of suicide attempt is not simply a byproduct of comorbid psychiatric disease, but instead may be the result of shared biology with non-psychiatric risk factors.”

The association between genetic variations on chromosome 7 and risk of attempting suicide was also not mediated by comorbid psychiatric disorders, and was replicated through an independent analysis of more than 14,000 veterans who had made a suicide attempt from the Million Veterans Program, a national research program to learn how genes, lifestyle, and military exposures affect health and illness.

“This study is an exciting advancement of our understanding of how the genetics of suicide attempt relate to that of psychiatric and non-psychiatric risk factors,” said JooEun Kang, an MD-Ph.D. student at Vanderbilt University Medical Center and co-lead author of this paper.

DNA variations in this region have previously been linked with insomnia, smoking, and risk-taking behavior, and although future work is needed to uncover the underlying biological mechanism, findings like these bring researchers a step closer to understanding the neurobiology of suicidality.

“The study findings also point to the importance of studying the potential direct causal paths between these risk factors and suicide attempt in patients with and without psychiatric illness,” added Douglas Ruderfer, Ph.D. Associate Professor of Genetic Medicine, Psychiatry, and Biomedical Informatics at Vanderbilt University Medical Center, co-founder and co-chair of the consortium, and senior author of the paper.