Chemosensory dysfunction is prevalent in coronavirus disease 2019 (COVID-19). However, the prevalence of smell loss or anosmia varies significantly between populations; some studies reported it occurred in less than 1% of cases, while others reported higher than 70% of cases exhibiting anosmia. This difference in prevalence can be due to multiple reasons, such as variations in the hosts' angiotensin-converting enzyme 2 (ACE2). In addition, differences can exist at the virus level, such as mutations in the spike protein that help aid cell entry.

Although the pandemic started in East Asia with the less infectious D614 strain, it spread to Europe and North America, mutating to form the D614G strain. Few studies on the prevalence of anosmia in D614 cases are available.

The dominance of the G614 strain over the D614 strain

The D614 strain emerged in Wuhan, China and spread to the rest of the world, accompanied by the appearance of the more infectious G614 strain, eventually dominating over the original Wuhan-1 strain. The co-existence of both strains made it difficult to determine whether the differences in anosmia were due to differences in infectivity of the coronavirus or differences in host populations.

To determine the suspected role of the virus in anosmia prevalence, it was important to find an ethnicity infected at different times or in other regions when either of the two strains was dominant. An ethnicity that met these criteria was South Asians. 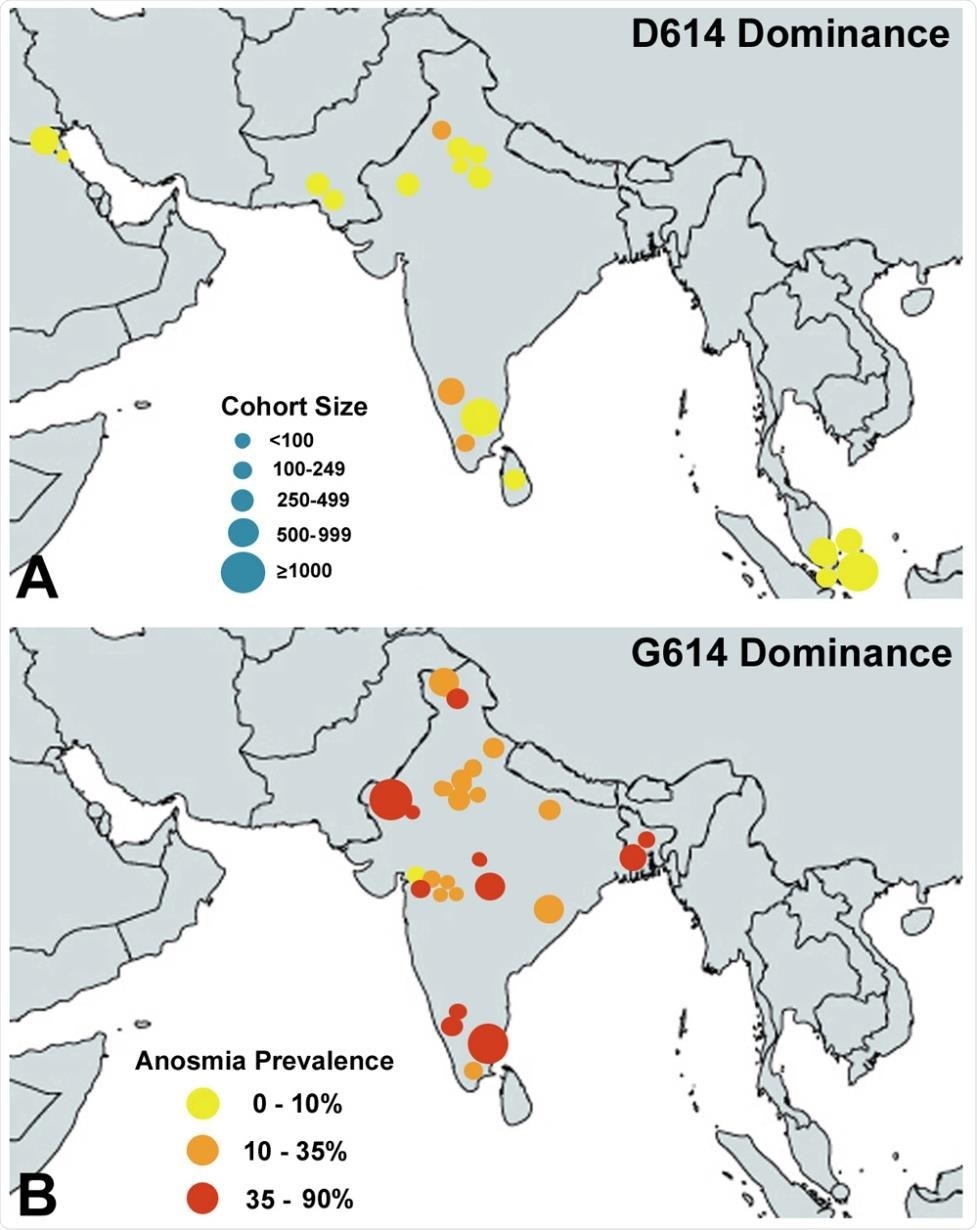 B. Location of studies reporting the prevalence of olfactory dysfunction among South Asians with D614 virus predominance (A), and G614 virus predominance (B). The cohort size is indicated by the size of the blue dots, the prevalence of olfactory dysfunction is indicated by the heat map, increasing from yellow to red. Note that mostly D614 infections lead rarely to a more than 10% anosmia prevalence, while almost all of the mostly G614 infections lead to a prevalence of 10-90%, in the same ethnicity (South Asians).

Meta-analysis and systemic review studies of the South Asians

A systemic review of 598 studies that addressed COVID-19 associated loss of smell was conducted. Forty studies met the criteria and were subjected to meta-analysis.

The main novel finding of the meta-analysis was that there was a significant difference in anosmia prevalence in the same ethnic group, dependent on which virus strain was dominant, either the D614 or G614.  Suggestive that the more infectious G614 strain has a more significant role in the prevalence of anosmia than other factors, such as ethnic differences in host proteins. This finding supports previous results that hypothesize that ethnicity plays a minor role in anosmia prevalence, and the G614 strain is responsible for the prevalence of anosmia.

What is the role of D614G mutation for anosmia?

How will the olfactory function be affected by the current and future variants of the virus?

Since the worldwide spread of the G614 variant, other new variants have emerged- Alpha, Beta, Gamma, and Delta. However, the alpha variant is the only SARS-CoV-2 variant whose prevalence of olfactory dysfunction has been reported, ultimately not having a significant change in anosmia prevalence.

The researchers also suggested that the cell entry properties of the new variants will continue to cause chemosensory dysfunction as long as they maintain the D614G mutation.

medRxiv publishes preliminary scientific reports that are not peer-reviewed and, therefore, should not be regarded as conclusive, guide clinical practice/health-related behavior, or treated as established information.