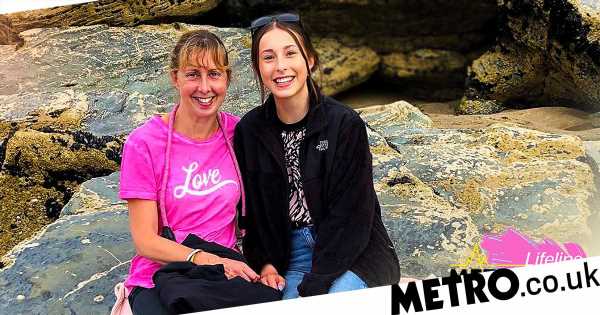 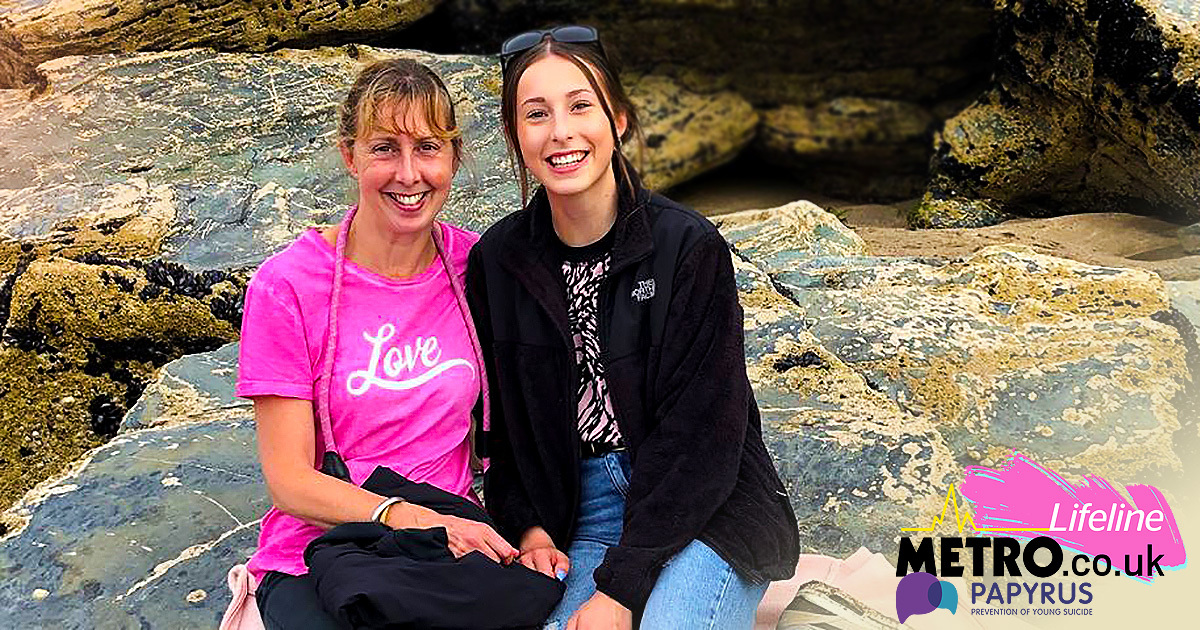 On 14 April 2021, 17-year-old Darcy Grace Hollinson, from Tavistock in Devon, took her own life after grappling with worsening mental health.

While the pain of losing the ‘vibrant and beautiful’ Darcy still haunts her mother, Debbie, every day, she is now campaigning to start vital conversations about young people, mental health and suicide.

Heading off to Canada to take part a 10k run in honour of Darcy, mum Debbie will be using it as an opportunity to raise funds for suicide prevention charity PAPYRUS– Metro.co.uk Lifeline’s chosen charity for 2022.

Here, Debbie shares Darcy’s story and why she is so keen to raise awareness for the charity that helped her family through their darkest time.

‘Darcy was a really vibrant girl: she was confident, intelligent, funny and feisty. She had a wide circle of friends, and not just from school, but from Cadets, Brownies and Guides, as well as friends from all different schools. She was quite a strong person, she wasn’t the sort of girl you would imagine to struggle with her mental health.

But it happened fairly quickly. In less than two years, she went from being a really happy, bright, sociable and sparky girl and just hugely declined until she died. She was only 17.

Things started when Darcy was about 15, when I noticed she was struggling with social anxiety. I thought it was around school, so I spoke to her teachers, and they were great in trying to accommodate to some of her needs. Then the pandemic happened.

Lockdown had a really bad effect on Darcy. She was at that age where teenagers want to socialise, have boyfriends and have some independence, and lockdown took all that away from her. She started to worry about what she looked like, and she began to believe she was overweight. She developed bulimia, and generally went off her food.

It was surprising as my daughter used to be quite body confident, completely at ease with herself. It was only when she got a little bit older, it would only take a couple of comments from people who aren’t really thinking what they’re saying.

Social media is there 24/7, pushing out images of what the perfect body is supposed to look like. When you’re young, you’re so influenced by what people think you should look like. I think that has a massive impact on Darcy.

As her struggles continued, we tried to get her some help through the Child and Adolescent Mental Health Services (CAMHS), but it was difficult. Because of the pandemic, we couldn’t see anyone face to face. We would have sessions over Zoom but Darcy had problems engaging with people she didn’t know on a video call, so it was really tough to get the right help.

In April last year, things got really bad and Darcy began to really struggle. She was moody and withdrawn, and we couldn’t get any help for her. My husband, Michael, and I took time off work to stay with her and just try and talk through what she was feeling – but she almost couldn’t say herself what made her feel so sad.

The days and weeks after losing our daughter are as painful as they are now as they were then. We have two older children, India and Louis, who lived away from home in Bristol and London. Having to break that news to them was the worst thing I’ve ever had to do.

They came home, and in the following weeks, we just couldn’t leave each other. We brought all our beds down into one room and all four of us slept together in one room. We just wanted to be together. I have always been protective over my family – and now I’m even more so.

To view this video please enable JavaScript, and consider upgrading to a webbrowser thatsupports HTML5video

It was such a shock to lose Darcy, as so many people just didn’t know she was struggling. But it galvanised a number of fundraising efforts for charities such as PAPYRUS to raise awareness about suicide.

I’m still fighting to raise awareness and start conversations around mental health. Statistics from PAPYRUS show that suicide is the biggest killer of under 35’s in the UK, and over 200 school children die a year from suicide. This isn’t good enough.

How you can help PAPYRUS

Join us on our amazing Metro.co.uk Lifeline challenge and help raise funds for PAPYRUS Prevention of Young Suicide.

Just before midnight on Saturday 2 July, 2022, we’ll be heading off into the dark sky to climb England’s highest mountain, Scafell Pike in the Lake District, for an unforgettable fundraising adventure.

Although our journey will start at night, to reflect the vital work the charity does in helping families and young people find light during their darkest times, it will finish just in time for us to catch the sun rise across the stunning scenery.

Registration costs £39 and fundraisers have to pledge to raise a miminum of £325 for PAPYRUS.

Places will be limited, so to take part sign up here.

I don’t know where my strength comes from, but I know I have to do everything I can to stop any other person taking their life, which causes another family to suffer in the same way we have.

If this effort saves one person, that’s great. I just have to keep going. I know it saves people as I’ve had messages from people who have heard Darcy’s story, and they’ve now thought twice about taking their own life. They’ve thanked me for having the ability to speak up about it.

In honour of Darcy, and to raise money for PAPYRUS, I’m running a 10k with my best friend Ellie, who lives in Canada, on Sunday May. I’ve been friends with Ellie for over 30 years, we’ve supported each other through all our ups and downs since we were housemates in London in our twenties – although we never thought we’d have to support each other through the loss of a child.

When she told me she was channelling her grief into a run called Love You in Canada to raise money for a women’s mental health charity, she asked me to fly over and join her.

I’m running to raise money for PAPYRUS, and some of the community in Tavistock are also running in Devon at the same time so it all feels like we’re running together. Ellie’s raised about $20,000 (£12,481), and I want to raise £10,000 myself.

I spend every day trying to keep busy, focusing on my children and my husband, as well as raising awareness about mental health.

Darcy would have been 18 in June last year. On that day, first thing in the morning, we planted a magnolia tree, and our church very kindly gave us a spot to plant it. We took some alpacas for a walk in the afternoon across Dartmoor.

This year, for the one-year anniversary of losing Darcy, Michael and I took India and Louis to the Lake District for a week to walk and we climbed The Old Man of Coniston, Scafell Pike and Helvellyn, taking time to reflect on the year and our memories of Darcy, including times spent in this area with her in the past. I know some Metro readers are doing a climb of Scafell Pike soon on behalf of PAPYRUS, and it is such a beautiful place to be.

There’s still a massive cloud of grief. I have a picture of Darcy on my bedside table, so she’s the first thing I see in the morning and the last thing I see at night. It’s like a physical pain, and I don’t think it will ever go away. I will cry every day for the rest of my life.

You can’t understand it unless you’ve been here, and I don’t want anyone to have to go through this. No one should feel like this, and that’s why I’m so passionate about getting the awareness out there.

I urge anyone who needs help to call the PAPYRUS Hopeline phone line, which provides a safe space for people to talk about their wellbeing and their circumstances. There are a lot of people who feel isolated and lonely. It’s such a massive thing to ask for help. People need to know they’re not alone.

If you would like to donate to Debbie Hollinson’s JustGiving page, you can do so here.

This year sees the return of our brilliant charity campaign: Metro.co.uk Lifeline.

Our aim is simple – to raise as much money as possible for charity with YOUR help.

For 2022 we have chosen to support PAPYRUS Prevention of Young Suicide, a vital organisation that works hard to reduce the number of young people who take their own lives.

As well as sharing their story to help raise awareness, readers, charity supporters and celebrities will also be taking on England’s highest mountain, Scafell Pike, at night on July 2, 2022.