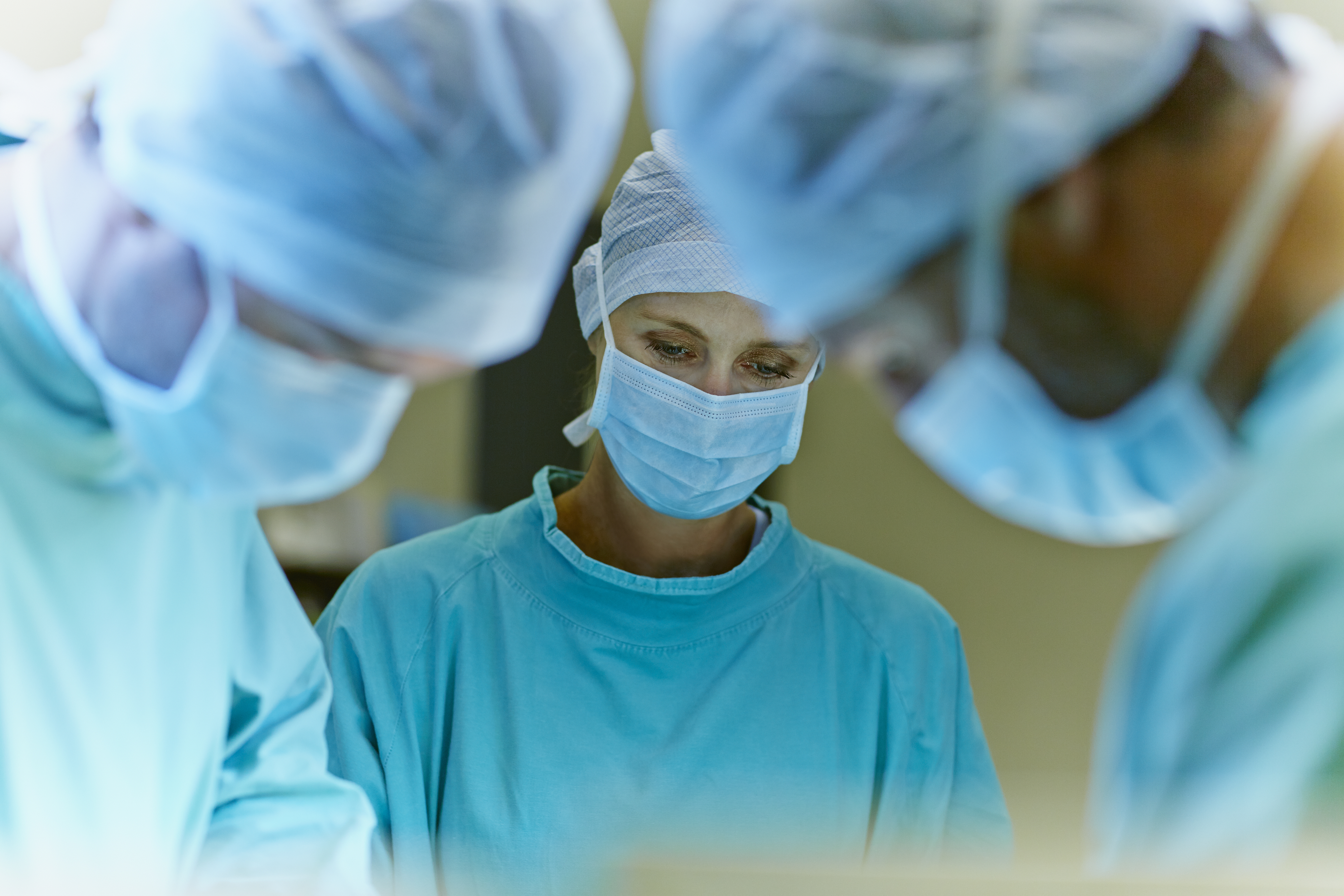 ‘I didn’t want people to be, you know, weird around me, because they were worried I was going to “tell” on them.

‘And so I allowed an increasing level of physical contact which I wasn’t comfortable with – until it reached a point where he then assaulted me.’

Fresh accounts of sexual assault and harassment in the surgery industry have emerged after surgeons began speaking out late last year in a journal.

The Royal College of Surgeons of England issued a statement this month condemning acts of sexual misconduct, but it’s clear that the issue is going to require a rigorous overhaul in order for there to be lasting change.

Female surgeons are hoping for a #MeToo moment – but whether they will get that over fleeting uproar is yet to be seen.

It’s not been a great month for male surgeons – this scandal aside, one report found female patients were more likely to die when operated on by men than women, and a surgeon who burnt his initials onto patients’ livers some years ago was finally removed from medical registers.

Sexism, before it even escalates to assault, is a blatant issue within the trade.

The odds don’t look good from the off.

Surgery is a heavily male-dominated industry in the UK and always has been.

Women make up 41% of early stage surgeons but only 30% of higher trainees and 14% of consultants – meaning men hold 86% of the top jobs.

This is one reason as to why Hannah’s story is sadly unsurprising.

Not wanting to ’cause trouble’ and risk negatively impacting her status at work, she remains anonymous. There is fear around the consequences of speaking out.

Hannah tells us: ‘I was aware of the difference in the way that female medical students and doctors were treated from the very outset of going into hospitals, by predominantly male consultants and male registrars, who are the more senior doctors.

‘That ranged from comments about appearance, to the way that the male medical students would sometimes come and ask the female medical students to go and ask a specific person if we can have a teaching session with them – because they knew that they were more likely to say yes to the girls than they were to the boys.

‘It’s difficult thinking back to because you normalise a lot of the things that are said or the behaviours that you see.’

Hannah says male colleagues made comments on her breasts, physicality, and PMS.

‘As I became more senior, I was more aware of my need to masculinise in certain ways,’ she notes.

This involved getting ‘in’ on the sexist jokes, brushing off things that didn’t feel right, and even taking on typically ‘female’ domesticated duties, such as running for cups of tea.

‘I behaved in order to fit in better with the men at the operating table so that I wasn’t elbowed out,’ Hannah tells us.

‘I started to participate in conversations that I would normally never have participated in, talking about things like the appearance of women’s breasts because I felt like if I didn’t, I wasn’t part of the team.

‘And this was on an operating table, around a patient.

‘I feel quite ashamed that I have tolerated things previously, but to say to someone that has control over your progress “I’m not really comfortable with that” takes quite a lot of confidence.

‘You would need to know that you were supported.’

Assault in the workplace

Things changed when Hannah was sexually assaulted by a former colleague on two occasions – a colleague that people ‘knew’ could be troublesome towards women.

While at work, she was assaulted in the office space through unwanted sexual touching.

On a separate occasion, that same man assaulted her while she was alone and preparing to go into theatre.

She had a ‘freeze’ response both times and stood there in disbelief, ‘pretending it never happened’.

After both instances, she went straight to work and carried on as normal, as she ‘had patients to see’.

‘After the second instance I did report him for inappropriate sexual touching,’ she says.

‘That was difficult for a lot of reasons.

‘To some extent, this person’s behavior was known to be inappropriate, it was accepted as such, it had been normalised across the department.’

Hannah’s report, which was made internally within her branch of the NHS and not to the police, was met with a response that ‘was not ideal’.

Hannah claims that the offending man did not face any ramifications for his actions in the way of suspension or through taking on sexual misconduct in the workplace training.

This is part of the problem with the underreporting of cases.

One key reason as to why Hannah felt she could file a complaint was because she was in the process of looking for a new job, so knew, sooner or later, she would be able to leave and start afresh without this tarnishing her reputation.

Hannah says: ‘All the statements from official bodies say we don’t tolerate that and you must report it. That’s the problem.

‘If it was that easy to do, people would do it frequently.

‘It’s everywhere. We’ve got a problem like all of medicine and all of surgery has a problem.

‘And if I had been on rotation, early on in my career for instance, I wouldn’t have had the option of leaving. It’s not like I could sit there and say, I want to go somewhere else.

‘I think it’s unfair as people who have already suffered and are struggling then have that burden of reporting it.’

Tamzin Cuming, Chair of the Women in Surgery Forum at the Royal College of Surgeons of England, is more optimistic about the reporting of incidents.

She says: ‘It’s something of a MeToo for surgery, and the response of support from many colleagues, including crucially of course many male colleagues, has been heartening to see.

‘There is no place in the surgical profession for any kind of bullying, harassment, or sexual assault.

‘A cultural change is needed in those backwaters of operating theatres stuck in the last century who haven’t woken up to the fact that women are their equals.

‘This means anyone and everyone who experiences or witnesses inappropriate behaviour should speak out, not passively observe or excuse.’

Having worked in a traditional male-dominated setting in the past but nowadays with a female team leader, she’s seen the difference first-hand and need for systemic change.

‘I did move on from that culture to working within a team led by a female surgical consultant and the atmosphere in her theatres was like a breath of fresh air,’ she says.

‘This opened my eyes as to how relaxed and pleasant an operating theatre could be without the culture of misogyny that was otherwise ubiquitous.’

This watershed moment is partly down to a respected and senior male surgeon, Simon Fleming.

He co-wrote with Rebecca Fisher an article exposing sexual assault in surgery in a medical publication called the Bulletin in September 2020.

Simon, who believes these issues have ‘kind of been an open secret’, tells us: ‘I am an ally and advocate, and someone who has made mistakes in the past and held his hands up.

‘We all need to grow and change and do better now that we know better.

‘My DMs after the article came out were full of people saying I’m glad you wrote this, but there was also anger with people saying we already know this is an issue.’

He believes the current reporting systems in healthcare are not adequate.

‘There’s no way to do it anonymously at all,’ he explains. ‘The hierarchical structures in the training environment not only infantalises trainees, but means they are not listened to or believed and feel like they cannot report for fear of recrimination.’

The way forward isn’t clear – it’s all well and good saying there needs to be change, but this won’t happen overnight.

In the words of Hannah, ‘the lines seem to be blurred’, and female surgeons are calling for help, support and change.

If you’re in the surgery industry and need support, the Royal College of Surgeons of England has a 24/7 confidential support and advice helpline, and the BMA has a helpline.

If you’ve been affected by the issues raised in this article outside of surgery, find support options from Rape Crisis.