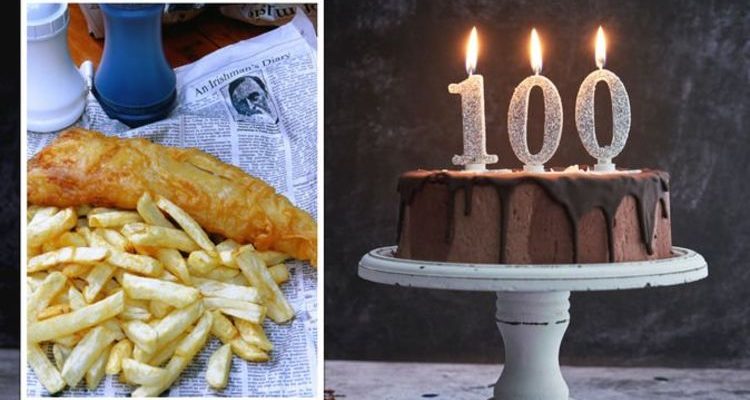 Piers Morgan talks to Britain’s oldest identical twins in May

Since the legend of the holy grail, we’ve been searching for the secrets to eternal life. But what are the secrets that the world’s oldest people swear by? From fish and chips, to bacon, to the Mediterranean diet, Express.co.uk enlists the help of expert dietitian Jenaed Brodell from Nutrition and Co to weigh in on the seven foods the world’s oldest people have sworn by.

Fish and chips once a week

109-year-old John Tinniswood, the oldest man in the UK, attributed his long life to a ‘chippy tea’ once a week – is this delicious dinner a holy grail?

Jenaed says: “Ultimately the fish would be providing essential fats as well as omega 3 fatty acids which is related to lower risk of cardiovascular disease.

“Chips would add to the enjoyment of the meal, and rightly so. This could have worked in his favour!”

Verdict: There are lots of health benefits to eating fish. Although fish and chips can be high in fat, treating yourself once in a while is perfectly fine.

Doreen claims: “The secret to a long and happy life is trusting people and having a good selection of cakes and biscuits, especially Battenburg Cake and chocolate biscuits.”

Eating the right foods is one thing, but actually enjoying treats is another dimension of healthy eating.

Jenaed says: “One of the beliefs I hold with food is that the majority of the time (70 to 80 percent) you should make healthier food choices, but you need to allow 20 to 30 percent of the time to also enjoy life’s pleasures; one of them being cake.

“A healthy relationship with food is key to food freedom. One of the major benefits of intuitive eating is better psychological health.

Jessie Gallan was Scotland’s oldest woman until 2015 when she died at the grand old age of 109.

Before her death, Jessie credited her long life with “eating porridge and staying away from men” – could the same work for you?

Jenaed says: “Porridge would provide fibre which is an added bonus in your diet and recommended.

“Studies suggest that increasing your dietary fibre intake, especially cereal fiber – is associated with a reduced risk of dying from cardiovascular disease and all cancers.

“When it comes to men, I’m not sure! But keeping stress levels down is good for your overall health!”

116-year-old Susanna Mushatt Jones was the world’s oldest living person, and the last surviving American born in the 19th century, before she died in 2016.

Speaking from her retirement home in Brooklyn, New York, she tipped eating bacon as her secret for longevity.

Will this work for you? Don’t get your hopes up.

“Eating too much saturated fat will raise your cholesterol levels, increasing your risk for heart disease.

“However in Susanna’s case, I believe it was the enjoyment that bacon brought her that contributed to her sense of joy to live longer! Food should always bring joy into your life and not be a cause for anxiety.”

Jeanne Calment, who died in 1997 at the unbelievable age of 122, credited olive oil, port and chocolate as the secrets to living longer.

Jenaed says: “It seems Jeanne’s diet consisted of what we know as a Mediterranean eating pattern. Olive oil is the main source of fat in the Mediterranean diet.

“Olive oil is high in healthy fats as well as having great antioxidant properties.

“People who consume this diet appear to have a higher life expectancy, including a lower chance of dying from cardiovascular diseases.”

Fortified Port wine was Jeanne’s tipple of choice: but could Port be what flows from the fountain of youth?

Jenaed says: “The grapes used in the production of port wine are rich in resveratrol, a polyphenol found in some plants and fruits, acting as an antioxidant.

“In addition, resveratrol has anti-inflammatory properties, so they help prevent several heart and autoimmune diseases.”

Alcohol is best enjoyed in moderation, as too much can have a negative effect on your health: but a glass of port every now and then could be a good move.

122 years is an awfully long time to go without chocolate, so we’re not surprised this made it into Jeanne’s top three.

Jenaed says: “When it comes to chocolate – life is about balance, and chocolate serves as a dopamine release and brings food enjoyment and freedom.”

Four golden rules for food to help you live longer

These are Jenaed’s top tips for how to eat better and live longer.