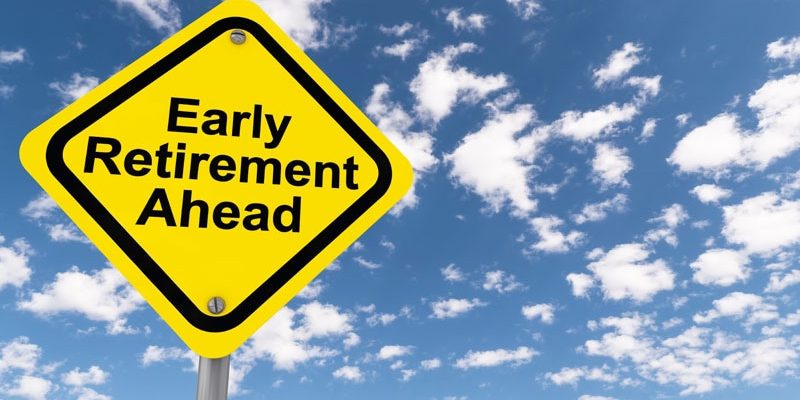 Leif Dahleen, MD, didn’t win the lottery or inherit millions of dollars. He worked as a hospital anesthesiologist for 13 years, saved half of what he earned on average, and invested wisely. By the time he retired at age 43 in 2019, he had saved up nearly $4 million — which he estimated was enough to cover his family’s expenses for the next 40 to 50 years.

“I recognize that I benefited from a high salary as an anesthesiologist and that my student loan burden, having graduated from public schools 20 years ago, was a fraction of what the average graduating medical student will have today,” he says. Dahleen paid off his $60,000 student debt early on.

Still, Dahleen believes that physicians who earn less than he did and have higher student debt can still save half their income and retire early. For example, an early-career single primary care doctor who makes around $200,000 and spends up to $90,000 a year (including paying off $24,000 in student loans) could potentially retire in 18 to 25 years, he says.

A married primary care doctor with the same household income, who would have a lower tax burden, could potentially do the same. “That wedding ring is actually an advantage, even without a second income,” says Dahleen. However, with a second income, a couple might be able to live off one person’s salary and save the other.

A major key to early retirement for physicians is having a modest lifestyle so they can save about half their income and pay off their debts. “That might mean avoiding or postponing some long-held desires. Your dream home, car, or city could be a hindrance to you reaching your financial goals,” says Dahleen. “If financial freedom is number one on that list, a modest lifestyle will get you there more quickly.” Some doctors may not want to live as modestly as the Dahleens, which would delay their retirement.

For example, Dahleen and his wife bought used cars, gave 10% of their income to charity, and chose to live near their families in small Midwestern cities where the cost of living is lower than in large metropolitan areas.

Doctors who prefer to live in larger cities (especially in the Midwest), will generally earn more, particularly in private practice, he says. But they are likely to spend more, owing to a higher cost of living and taxes.

Doctors can still save toward retirement by maxing out their 401(k) contribution to get the full employer match and maxing out a health savings account (HSA), says Dahleen.

“Having nearly $3300 a month in retirement savings comes close to a common recommendation that physicians save 20% of their gross income towards retirement,” says Dahleen.

Also, once student loans are paid off or forgiven, Dahleen recommends putting some of that monthly $2000 toward retirement, which can also shorten the time to reach retirement by at least a few years, he says.

Not an Easy Goal

Dahleen has experienced a few challenges in saving half of his income every year. Some years his family saved less, owing to big one-time expenses, such as paying cash for a home and then building an expensive home years later.

But in other years, they saved more than half of his income. “I estimated that we were saving at least 70% of my after-tax pay in late 2014. That included maxing out my employer’s pre-tax retirement plans [401(k) and 457(b)].” The combined retirement funds represent about 18% of his investment portfolio.

He calculated the amount he needed for retirement on the basis of his planned retirement age, his family’s anticipated annual expenses, and a withdrawal rate of about 2% to 3%.

“I wanted to have 40 to 50 years of expenses that we would withdraw at a more conservative rate than the 4% that is commonly recommended for a standard-length retirement,” says Dahleen, who blogs about how physicians can become financially independent and retire early (FIRE).

In 2014, Dahleen realized he could afford to retire soon. But he waited another 5 years to retire because he still liked working as an anesthesiologist and wanted to wait for his replacement to finish residency training.

Continuing to Make Sure His Money Lasts

Dahleen has always managed his investments, including choosing what to invest in. He is a big fan of low-cost, simple index funds and takes a long-term approach to investing.

“Anyone smart enough to become a doctor can easily manage his or her own investments if they educate themselves first and understand what they’re doing. That can also save them a lot of money in fees,” says Dahleen.

After reading a handful of financial advice blogs for doctors written mainly by residents, Dahleen decided to blog about his experience (Physician on FIRE).

Dahleen said that nearly three quarters of over 1500 physician respondents to a reader survey he conducted would like to retire before age 60. “The 50s seem to be the most likely age, which is definitely still early for my readers, most of whom have extensive education and training before starting careers in their late 20s to mid-30s in many cases,” says Dahleen.

Another 20% said they would like to retire in their 40s, as Dahleen did, and just under 2% hope to retire (or have done so) in their 30s.

“Doctors in their late 40s and 50s are often at a crossroads trying to sort out what their work/life balance will be in the next 5 to 10 years of their lives as their children get older and the demands of their work become more onerous,” says Dahleen.

He admits that he didn’t feel called to practice medicine as some doctors do and that he wanted to travel the world with his wife and two children while they were still at home. The blog gives him the flexibility to do that. Dahleen is paid well from advertising on his website but says “that wasn’t a factor financially in my decision to retire. We met our goal and our finances were very sound.”

He gives the following advice to physicians who want to boost their savings for retirement.

Since most doctors retire later than he did, Dahleen typically recommends they save up an average of 25 years’ worth of anticipated expenses. “If you do that, you can get by with a 4% withdrawal rate. That will be enough in the vast majority of cases to last 30 or more years for a normal retirement time frame.”

He recognizes that some doctors, especially early in their careers, may want to enjoy their higher income rather than save toward retirement. These simple steps can jump-start their savings.

Dahleen also recommends that physicians read and educate themselves about investing. If doctors don’t put in the time to learn about money and investing, they can make costly mistakes, he says. Rather, they should consider consulting low-cost financial advisors who charge a flat fee or hourly rate, especially early on when they may be still figuring this out.

Physicians with a lot of student debt can benefit from applying for positions that qualify for the Public Service Loan Forgiveness (PSLF), including those at nonprofit companies and hospitals.

“If your debt is more than twice your annual income, I recommend looking exclusively at positions that qualify for PSLF. Fortunately, they are abundant in most physician specialties, especially those in the lower quartile for pay,” says Dahleen.

“Ultimately, doctors who want to reach financial independence and retire earlier need to increase the gap between their income and spending. That will allow them to save and invest in the future they desire,” he says.

But if living modestly isn’t for you, don’t choose misery for the sake of financial independence but recognize that choices have consequences, says Dahleen.

“Do some soul searching and decide what your top priorities truly are. If a nice neighborhood in one of our nation’s most expensive cities beckons you, be sure you love your job and that it loves you back!”

Christine Lehmann, MA, is a senior editor and writer for Medscape Business of Medicine based in the D.C. area. She has been published in WebMD News, Psychiatric News, and The Washington Post. Contact Christine at [email protected] or via Twitter @writing_health.