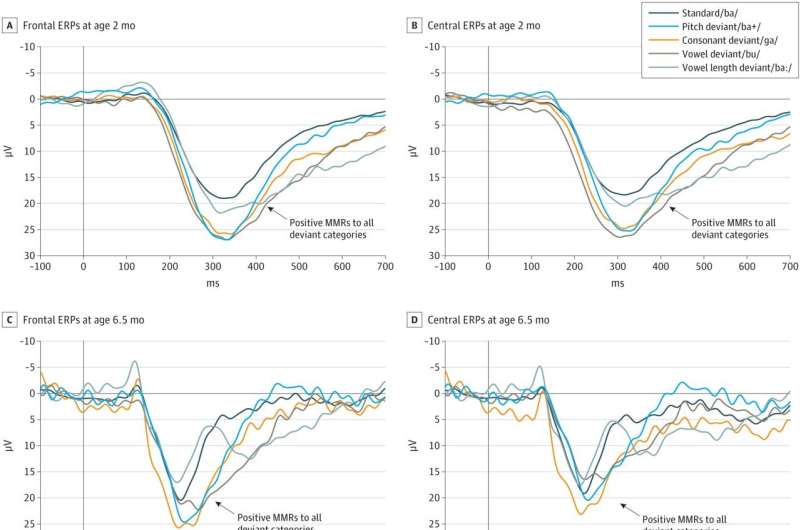 Up to 70% of mothers develop postnatal depressive mood, also known as baby blues, after their baby is born. Analyses show that this can also affect the development of the children themselves and their speech. Until now, however, it was unclear exactly how this impairment manifests itself in early language development in infants.

In a study, scientists at the Max Planck Institute for Human Cognitive and Brain Sciences in Leipzig have now investigated how well babies can distinguish speech sounds from one another depending on their mother’s mood. This ability is considered an important prerequisite for the further steps towards a well-developed language.

The infants found it particularly difficult to distinguish between syllable-pitches. Specifically, they showed that the development of their so-called Mismatch Response was delayed than in those whose mothers were in a more positive mood. This Mismatch Response in turn serves as a measure of how well someone can separate sounds from one another. If this development towards a pronounced mismatch reaction is delayed, this is considered an indication of an increased risk of suffering from a speech disorder later in life.

“We suspect that the affected mothers use less infant-directed-speech,” explains Gesa Schaadt, postdoc at MPI CBS, professor of development in childhood and adolescence at FU Berlin and first author of the study, which has now appeared in the journal JAMA Network Open.

“They probably use less pitch variation when directing speech to their infants.” This also leads to a more limited perception of different pitches in the children, she said. This perception, in turn, is considered a prerequisite for further language development.

The results show how important it is that parents use infant-directed speech for the further language development of their children. Infant-directed speech that varies greatly in pitch, emphasizes certain parts of words more clearly—and thus focuses the little ones’ attention on what is being said—is considered appropriate for children.

Mothers, in turn, who suffer from depressive mood, often use more monotonous, less infant-directed speech. “To ensure the proper development of young children, appropriate support is also needed for mothers who suffer from mild upsets that often do not yet require treatment,” Schaadt says. That doesn’t necessarily have to be organized intervention measures. “Sometimes it just takes the fathers to be more involved.”

The researchers investigated these relationships with the help of 46 mothers who reported different moods after giving birth. Their moods were measured using a standardized questionnaire typically used to diagnose postnatal upset. They also used electroencephalography (EEG), which helps to measure how well babies can distinguish speech sounds from one another.