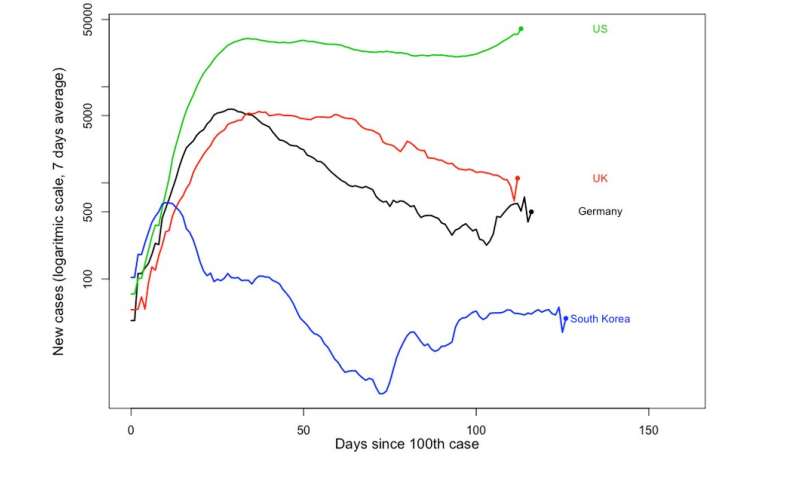 German authorities have had to take the difficult decision of reimposing a pandemic lockdown in the state of North Rhine-Westphalia after a resurgence of the coronavirus. This comes after the country’s R number, a measure of how quickly new cases of the disease are emerging, almost tripled over the course of few days.

Germany has been widely praised for its response to the pandemic. It has had far fewer deaths than most similar sized western countries, its national lockdown was relaxed after just six weeks, and new cases recently reached a low of about 500 a day in a country of more than 80 million.

So does the big increase in the R number and the reintroduction of lockdown at a local level suggest something has gone wrong in the country’s strategy? In reality it may be related to how R is calculated and its limits as a measure of the spread of disease. But it also signals the risks that remain even as many other countries end their lockdowns.

Alarm bells first sounded in mid-June, when more than 1,500 workers at a meat-processing factory in Gütersloh in North Rhine-Westphalia tested positive. More cases were found in the broader area, including in neighbouring counties. 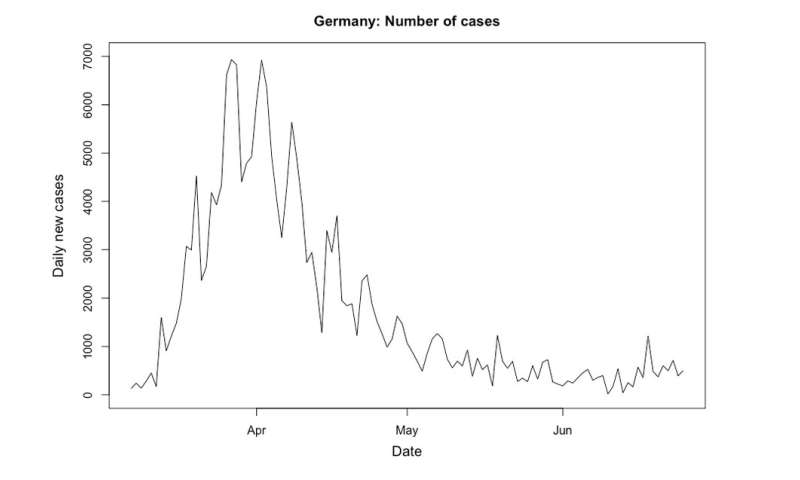 This localised outbreak has had a disproportionate effect on the country’s overall R (reproductive) number. R represents the average number of people who catch the virus from an infected person. When R is bigger than 1 it means the number of cases are increasing.

During the mid-June Gütersloh outbreak, R jumped from the value of about 1 to almost 3 before falling back to below 1. But, such values of R need to be carefully interpreted. 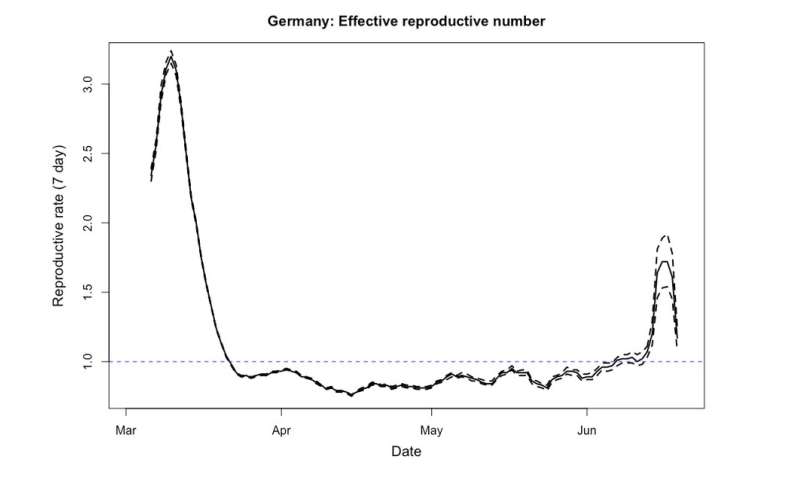 There are different methods that can be used to calculate R. The one used in Germany is based on the total number of known infected individuals in the whole country. It essentially compares the number of new cases on a given day with those four-to-seven days earlier.

If 500 new cases were noted seven days before the Gütersloh outbreak of 1,500 new cases, R will be equal to 3. This means each person with the virus has infected, on avereage, three others.

But, this number hides substantial potential variation in different locations. While in most of the country, the numbers of new cases may have continued to fall, one or only a few people in Gütersloh could have triggered an outbreak on a scale of around 1,500. Such large and localised outbreaks are called super-spreading events.

It’s too early to speculate on exactly what caused the June outbreak and whether it started with one or more people. But with a continuous supply of both infected and susceptible individuals in a population which is still far away from herd immunity, the disease is likely to spread when the conditions are right.

The nature of meat processing factories may have been a factor. Cold temperatures can combine with busy workplace conditions, intensive labour, and a noisy environment encouraging shouting, which can spread the virus. Other localised outbreaks have also been linked to meat factories in a variety of countries.

Lessons for the future

In many countries, COVID-19 cases are generally falling to low numbers. This means any substantial but localised outbreak will cause the R number to increase temporarily.

But this does signal an increased risk of a more sustained spread. In the “first wave” of COVID-19, a single person caused an outbreak in a ski resort of Ischgl that arguably led to a rapid increase in cases across Europe including in Germany.

The risk of a new superspreading event contributing to a “second wave” requires quick and decisive action. So it’s essential that such events are managed by appropriate control measures, including renewed lockdowns. Since lockdown decisions imply huge economic costs, they need to be supported by predictions based on epidemiological models.