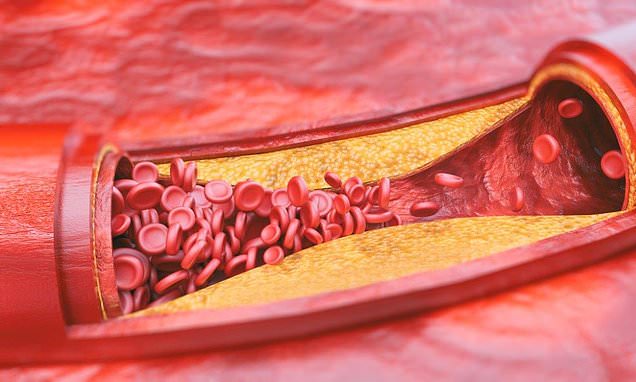 Genes which trigger heart disease could one day be ‘switched off’ by doctors to stop fat building up in the arteries, scientists say

Doctors will one day be able to ‘turn off’ the genes which cause heart disease and heart attacks, according to scientists.

Researchers at the University of Sheffield say they have spotted a gene nicknamed TWIST in the inner layer of the heart’s arteries which is a promising target.

And by targeting it and potentially shutting it down they say they could save lives by preventing fat and cholesterol building up in the blood vessels.

The ‘vitally important’ study is ongoing and has been funded by the British Heart Foundation. 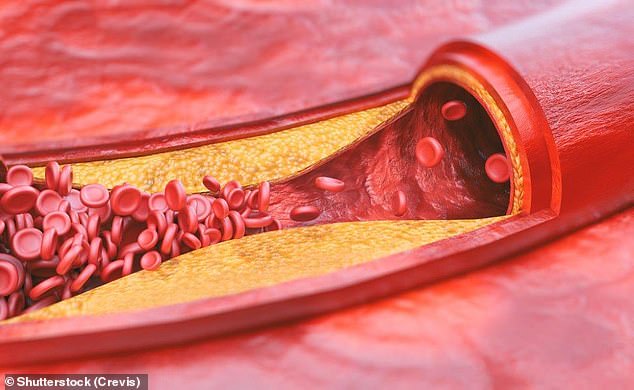 The Sheffield researchers’ goal is to switch off a gene they have found to enable atherosclerosis (illustrated), a condition in which fat builds up in the arteries and narrows them, potentially causing deadly damage to the heart

Atherosclerosis occurs when plaques made of fat, cholesterol, calcium and other substances accumulate in artery walls.

Over time, the blood vessels harden and narrow, which restricts the flow of blood around the body.

Atherosclerosis is most serious when it reduces blood supply to the heart or brain, which can result in a heart attack or stroke, respectively.

The condition, and the diseases it can cause, is the single biggest cause of death in the developed world, with it being responsible for one in three fatalities.

Atherosclerosis often starts in childhood and worsens with age, however, most do not experience symptoms until middle age or older.

‘We will be identifying a drug to target a gene which contributes to the build-up of fatty material in the arteries,’ said lead researcher Professor Paul Evans.

‘Switching this gene “off” will make the arteries in the heart less ‘leaky’, preventing cholesterol from building up and causing blockages which present as heart attacks and stroke.’

Professor Evans and his team’s main goal is to prevent a condition called atherosclerosis, in which lumpy ‘plaques’ of fat and cholestrol build up in arteries.

These narrow the blood vessels meaning less blood can go through at a time, so increase blood pressure and put more strain on the heart muscle.

Most people over the age of 60 have some level of atherosclerosis, and healthy people in their 40s have about a 50 per cent chance of getting it.

The condition, if left untreated, can lead to heart disease, heart failure, heart attacks or stroke – all of which are often fatal.

Not exercising, high cholesterol, high blood pressure, diabetes and being overweight are all risk factors for atherosclerosis – and are common health problems.

Associate medical director of the British Heart Foundation, Professor Jeremy Pearson said: ‘Atherosclerosis, where there’s a build-up of fatty substances in the blood vessels, is an underlying cause of life-threatening conditions such as heart attacks and strokes.

‘We know that variations in our genes play a part in the development of atherosclerosis, so if these genes can be “switched off”, many lives could be saved from heart and circulatory diseases.’