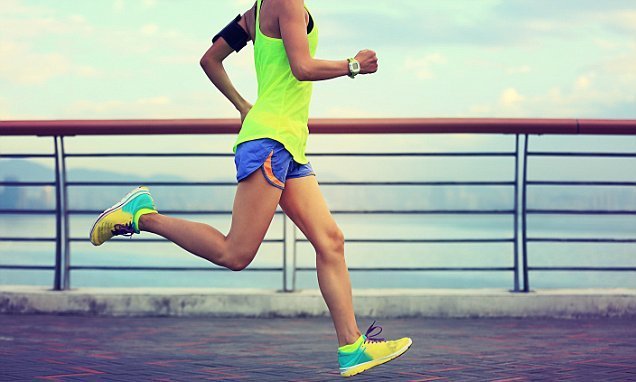 Exercising regularly ‘can keep heart and arteries young’: Secret to youthful looks and a long life could be working out five times a week, reveals study

People should exercise four or five times per week to keep their heart, arteries and even their looks youthful, scientists say.

Any form of exercise slows down ageing of the heart, researchers found, but exercising fewer than four times a week only ensures the health of smaller arteries.

As people get older their arteries – which transport blood in and out of the heart – tend to stiffen up, which increases the risk of heart disease.

Regular exercise can keep arteries supple and improve blood flow, which is good for the heart and can keep people’s skin looking young for longer, as well as improving wellbeing and boosting energy.

Researchers in Texas suggest different amounts of exercise over a person’s lifetime may benefit different parts of the circulatory system.

To keep their large, central arteries healthy, people should do at least two hours of exercise per week – four or more 30-minute sessions.

One researcher said exercise could ‘turn back time’ on people’s ageing hearts and blood vessels. Exercising two or three times per week keeps middle-sized arteries – such as those supplying the brain and head – healthy, but more fitness is needed to maintain the main arteries in the chest

Arteries are the main blood vessels which supply blood to the body – they are elastic tubes but tend to become stiffer as people get older.

An unhealthy lifestyle and poor diet can also lead to fatty buildup in the arteries, which can reduce their efficiency and increase the risk of heart disease.

Coronary heart disease is a major cause of death worldwide and happens when unhealthy or blocked arteries restrict the flow of blood to and from the heart.

It can cause heart attacks and heart failure.

Exercise could turn back time on older hearts

Lead author Dr Benjamin Levine said: ‘This work is really exciting because it enables us to develop exercise programmes to keep the heart youthful and even turn back time on older hearts and blood vessels.’

More exercise is needed to keep the main arteries young, and the findings could help design fitness programmes in the future.

Researchers at the Institute for Exercise and Environmental Medicine in Dallas, Texas, studied the exercise habits of 102 people in their 60s.

Patients were then put into four categories judging by how much exercise they had done.

Categories ranged from sedentary (fewer than twice a week) to master athletes (six to seven times per week). One exercise session was at least 30 minutes.

The researchers found middle-sized arteries, supplying blood to the head and neck, are healthier in people who exercise two to three times a week over their lifetime.

WHAT IS CORONARY HEART DISEASE?

Coronary heart disease (CHD) is a major cause of death both in the UK and worldwide. CHD is sometimes called ischaemic heart disease.

However, not everyone has the same symptoms and some people may not have any before CHD is diagnosed.

Coronary heart disease is the term that describes what happens when your heart’s blood supply is blocked or interrupted by a build-up of fatty substances in the coronary arteries.

Over time, the walls of your arteries can become furred up with fatty deposits. This process is known as atherosclerosis and the fatty deposits are called atheroma.

You can reduce your risk of getting CHD by making some simple lifestyle changes.

All arteries, including the larger ones which supply blood to the chest and abdomen, are healthier among people who exercise four or more times per week.

The people in this group were achieving approximately the amount of weekly exercise recommended by the NHS.

However, the research did not account for factors such as people’s diet, social background and education, which may also have had an effect.

The team’s findings were published in The Journal of Physiology.

Further study into whether middle age is too late

Dr Levine added: ‘Previous work by our group has shown that waiting until 70 is too late to reverse a heart’s ageing, as it is difficult to change cardiovascular structure even with a year of training.

‘Our current work is focussing on two years of training in middle aged men and women, with and without risk factors for heart diseases, to see if we can reverse the ageing of a heart and blood vessels by using the right amount of exercise at the right time.’

A study published earlier this month also suggested a brisk 20 minute walk a day slashes the risk of developing heart failure in middle age by nearly a third.

Getting off the sofa and going for a walk or a bike ride for the recommended two-and-a-half hours a week can reduce the risk of the chronic illness in just six years.

But failing to do any exercise or stopping after leading a previously active life can increase the chance of getting the devastating condition.

Researchers from Johns Hopkins University in Baltimore said the findings suggested it may never be too late to reduce the risk of heart failure with moderate exercise.

Even those who progress from no exercise to consistently doing the recommended amount within six years cut their risk by nearly a quarter.

The study followed a survey by Public Health England last year that found 41 per cent of 40 to 60 year-olds – around 6.3 million people – don’t manage a brisk ten-minute walk even once a month.