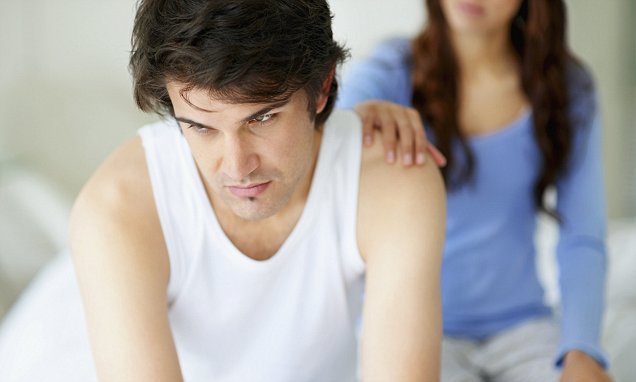 Depression in men slashes a couple’s chances of getting pregnant by 60 percent, new research reveals

When a man is depressed, he and his partner are far less likely to be able to have a baby, according to new research.

A woman’s depression, however, made little difference in the odds that a couple being treated for infertility would be able to conceive.

The new National Institutes of Health study looked at a wide scope of the intersection between infertility and depression, including treatments for both in both men and women.

Researchers there also discovered that taking certain kinds of antidepressants may raise the risks that a woman would miscarry – an important insight into key considerations couples should take into account when getting infertility treatments. 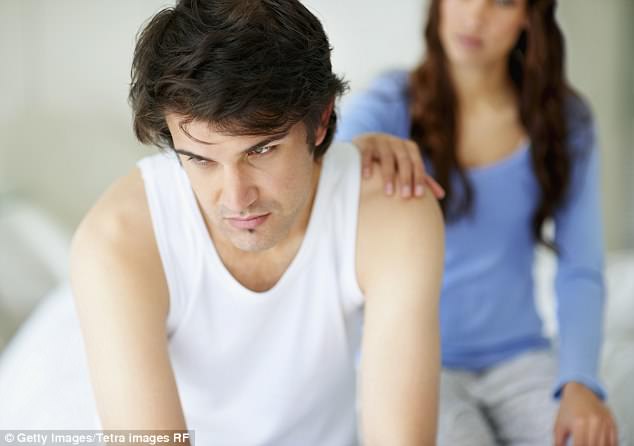 When the man is depressed, he and his partner are 60 percent less likely to be able to conceive a child, according to new National Institutes of Health research

Trying and struggling to get pregnant is a frustrating and disheartening process for 10 percent of women, and their male partners are hardly immune to the effects.

Historically the study and treatment of fertility has overwhelmingly focused on the woman’s body.

Only since the late 18th century have doctors taken a broader view of the issue, and finally started to consider the other half of the equation: men.

Once it was recognized, the only ‘treatments’ for male infertility were for a woman to have sex with a different man or to have another man’s sperm injected into her vagina.

It wasn’t until the 1970s that in vitro fertilization was introduced to treat infertility in both men and women.

More women are using in vitro fertilization (IVF) to get pregnant than ever, but many couples struggling with infertility would still prefer to use drugs to help them conceive together.

These include hormone therapies and drugs to treat erectile dysfunction or premature ejaculation in men.

But even with these therapies, the new research found that depression can counteract their effects, especially for men.

Only in recent years have scientists started to closely analyze the impact of men’s mental and emotional well-being on their fertility.

Some of that work has revealed that men ho are depressed have lower concentrations of sperm in their semen, while other research has suggested that men’s stress levels influence their children’s resilience.

Research on men’s depression and fertility is still in its earliest days, though, and very little is known about the interaction between drugs to treat the two conditions.

To try to get some perspective on these issues, researchers at the National Institutes of Health (NIH) reviewed a number of previous studies on each of these issues.

Previous research had estimated that as much as 40 percent of women who seek out fertility treatments and more than half of men that do so feel some symptoms of depression.

In the new study, the numbers were much lower for major depression, with only about six percent of women and 2.28 percent of men reporting the condition.

The vast majority of those women were also taking some form of antidepressant.

These drugs fall roughly into two categories: selective serotonin reuptake inhibitors (SSRIs) and everything else.

These are the most commonly-taken drugs, and include Prozac, Lexapro and Paxil.

Drugs that fall into the ‘other’ category, such as older MAOIs, Norpramine and ‘atypical’ antidepressants like Wellbutrin.

Worryingly, the ‘atypical’ alternatives to SSRIs, like Wellbutrin, are often prescribed to people who have sexual dysfunction side effects from other drugs.

Yet these women were 3.5 times more likely to lose a pregnancy in the first trimester than women who were not taking any antidepressants.

But a man’s depression was more predictive of infertility than any other factor.

When the man was depressed, a couple was a full 60 percent less likely to successfully have a baby.

Infertility’s impact on one’s psychology makes intuitive sense, but the effects of depression on fertility are not as well understood.

The new research joins a growing body of academic work that shows the connection between mental and physical health runs deeper than ever before suspected.

The new research highlights the importance of treating depression – carefully – in both halves of a couple.