Nasopharyngeal carcinoma (NPC) is the most common malignant tumor of the head and neck in Southeast Asia and Southern China and originates from the epithelial tissue of the nasopharynx. Most NPCs are non-keratinizing cancers, which are prone to migration and invasion. Since the early symptoms of NPC are atypical, most patients are diagnosed after having lymph node or distant metastasis. The prognoses of late-stage patients are relatively poor. Therefore, exploring the molecular mechanism of NPC migration and invasion and identifying novel molecular markers or targets are very important for the early diagnosis and treatment of NPC.

Circular RNAs (circRNAs) have a closed circular structure and are widely expressed in mammalian cells. Although they used to be considered as the “waste” of RNA splicing over the last century, in recent years, with the development of next-generation sequencing technology, an increasing number of studies have demonstrated that circRNAs are related to many human diseases, especially malignant tumors. Some well-known oncogenes or tumor suppressor genes can also encode circRNAs, which may play important roles in coordinating or antagonizing host genes in cancer progression. 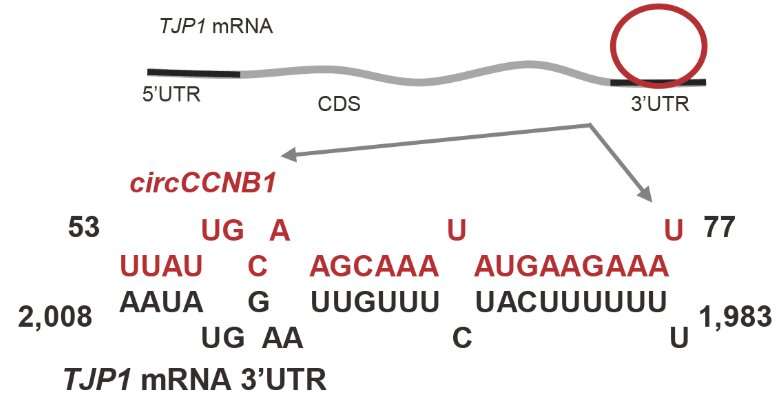 The circRIP assay verified the combination of circCCNB1 and TJP1 3’UTR. Actinomycin D treatment followed by RT-qPCR showed that TJP1 mRNA stability was significantly increased in NPC cells after overexpression of circCCNB1. To explore whether there is a protein that participates in the regulation of TJP1 mRNA stability, an RNA pull-down assay by LC-MS was performed. RIP assay showed that the binding ability between NF90 and TJP1 mRNA increased when circCCNB1 was overexpression in NPC cells. 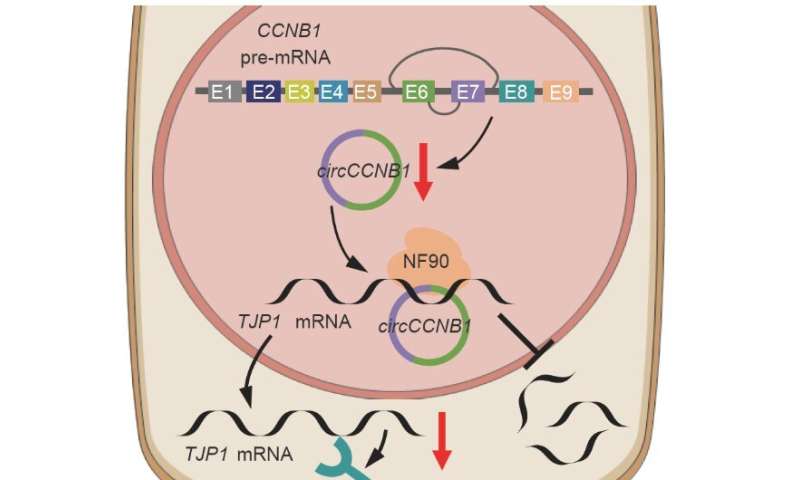 In summary, this study demonstrates that circCCNB1 is expressed at low levels in NPC and is associated with the migration and invasion of NPC. Mechanistically, circCCNB1 interacts with NF90 and subsequently promotes binding between NF90 and TJP1 mRNA, leading to the upregulation of TJP1 mRNA stability. We elucidated a new regulatory mechanism of circCCNB1 in NPC migration and invasion that may provide potential markers and targets for the diagnosis and treatment of patients with NPC.