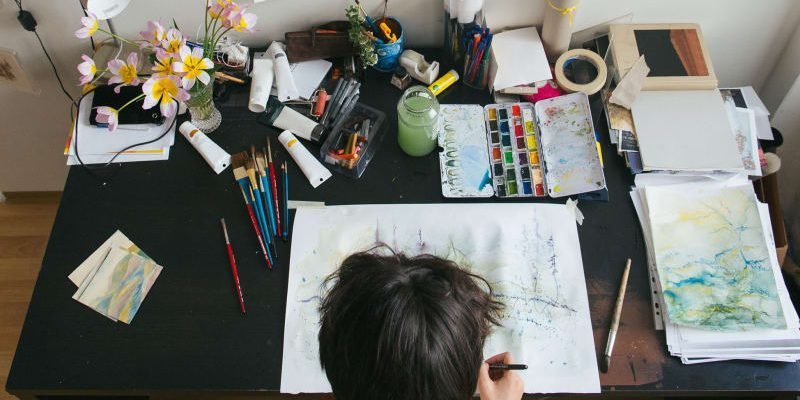 When Marnie Higgs was hospitalised for six weeks after her mental health severely declined, a friend suggested she take some watercolour paints with her to avoid boredom.

"Within two weeks I had horrendous insomnia coming off a particular medication, so, at 2am, I took out my paints, jumped online to get some ideas and began to paint, even though I've never been artistic in that way before," Higgs, 39, recalls. 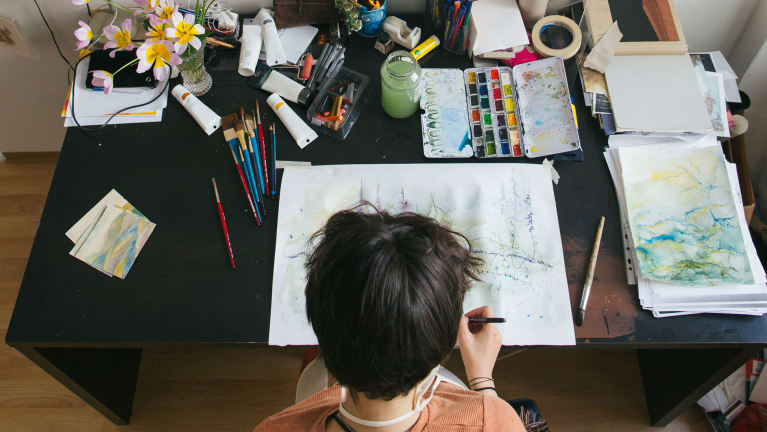 When finished, we’re able to “see” something new about ourselves through the undertones of our art.

"For some reason I was able to put some of my thoughts and feelings on paper and have them make sense for the first time."

Having suffered postnatal depression in 2012 from her second pregnancy and post-traumatic stress disorder the following year after her 11-month-old was diagnosed with kidney cancer, Higgs has gradually coloured her way out of her mental darkness. She now sells her paintings online, which has been an important part of her recovery.

"Being able to show that work and be so open about my story has made me realise how brave I really am," she says. Higgs has found art therapy so beneficial for her mental health that she still attends a hospital open studio art program every week.

"I'm on my way to a full recovery. Painting has given me my power back."

Artist and associate lecturer of art therapy at La Trobe University, Libby Byrne, says artistic self-expression is beneficial irrespective of skill level. When we engage in non-judgmental creative techniques including painting, drawing or colouring, we experience a sense of "flow" where we lose ourselves in our art work, Byrne says.

When finished, we're able to "see" something new about ourselves through the undertones of our art.

"When we're feeling hopeless or helpless, it allows us to gain a sense of control over our personal circumstances by providing insight into our unconscious mental state and our psychological disposition, and enables us to express emotions that are too difficult to put into words," says Byrne.

She adds that discussing the art work with a therapist enables people to better understand their illness.

Evidence of the effectiveness of art therapy is mounting. A 2017 study from Sweden's University of Gothenburg found that after 10 hour-long art therapy sessions, patients suffering from moderate to severe depression improved on an average of almost five steps on a rating scale used for depression.

Meanwhile, research published in 2016 in the Journal of the American Art Therapy Association found that 45 minutes of art-making reduces levels of the stress hormone cortisol, therefore increasing the body's relaxation response.

Evidence reported in The Arts in Psychotherapy journal confirms that engaging in art for as little as three minutes activates the brain's reward pathways. "Positive emotions play a tremendous role in relieving many symptoms," says Noah Hass-Cohen, author of Art Therapy and the Neuroscience of Relationships, Creativity and Resiliency: Skills and Practices.

"Enjoyment, fun and playfulness have the potential to tame fear and worry, which are negative contributors to any health challenge you're faced with.

There is also evidence that art therapy helps patients with dementia and significantly alleviates symptoms of psychological trauma.

"Often when suffering from mental health [problems], people can feel very isolated and disconnected, as it's an illness that no one can 'see' ," says Byrne. "Art is a point of connection enabling us to show what our world looks like, which is very important for healing."