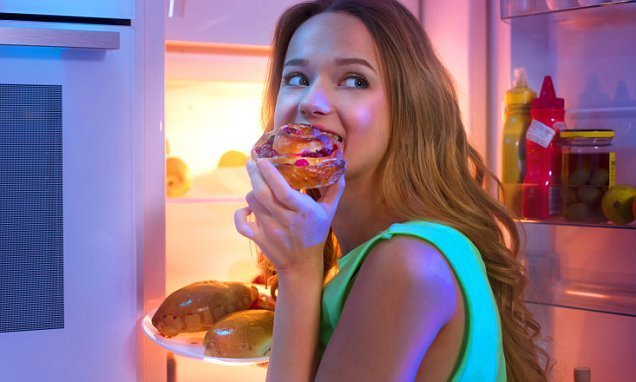 Avoiding a midnight snack and early breakfast is the key to staying slim: Scientists reveal eating ONLY within a 12-hour window helps keep the weight off

Avoiding a midnight snack and early breakfast may be the key to staying slim, new research suggests.

Mice on a high-fat diet gain less weight when they are only able to eat for half the day, an Australian study found.

Previous research suggests late-night snacking is fueling the obesity crisis, with humans only supposed to eat between 8am and 8pm, or even earlier.

Yet, the researchers argue eating within any 12-hour window, whether during the day or at night, helps regulate signals that control people’s appetites.

More than 25 per cent of adults in the UK are classified as obese. Carrying too much weight increases people’s risk of developing type 2 diabetes, heart disease, stroke and even certain cancers. WHAT IS THE BEST TIME OF DAY TO EAT CARBOHYDRATES?

He found eating pasta and bread at dinner is better for people’s waistlines than toast in the morning.

Experts previously thought carbohydrates should largely be eaten at the start of the day as the body has longer to burn the glucose they release.

Failing to do this causes the release of insulin to bring blood sugar levels back to normal, which is done by storing excess sugar from carbs as fat, causing people to put on weight.

Yet, the new study, broadcast on the BBC’s Trust Me I’m a Doctor, found eating carbohydrates in the evening causes less dramatic blood sugar spikes than carb-loading at breakfast, providing the rest of a person’s food intake for that day has not been too starch-heavy.

Dr Mosley advises people are consistent with their carb-eating habits and avoid overindulging with every meal.

He carried out the research with the University of Surrey by asking healthy volunteers to eat either the majority of their daily carbohydrate intake in the morning or evening.

All of the study’s participants ate the same amount of carbs every day, which included bread, pasta and vegetables.

For the first five days, they ate most of these foods for breakfast, followed by five days of eating a normal diet before finally switching to a low-carb breakfast, high-carb dinner for the last five days.

The researchers analysed the participants’ blood sugar levels throughout the study.

Restricting food intake to half the day boosts weight loss

Results suggest mice who have access to food for just half the day weigh less regardless of whether the nocturnal animals feed at night, which is their normal active period, or during the day, when they are naturally asleep.

Such rodents are slimmer than those eating the same number of calories over an entire day.

This is thought to be due to them having more sensitive vagus nerves, which are responsible for communicating feelings of hunger to the brain.

The study was published in the Journal of Neuroscience.

What are vagus nerves?

After eating, vagus nerves within the stomach wall send signals to the central nervous system to indicate whether people feel full.

Previous research suggests such nerves lose their sensitivity in obese people, which causes their stomachs to need to contain a lot more food before they feel full.

Targeting vagal nerves with drugs has been suggested as a potential treatment for obesity.

The researcher fed mice either a standard laboratory diet or a high-fat eating plan over 12 weeks.

Those following a high-fat diet either had access to such food across the entire day, or only during the light or dark phase. Dieters feel hungrier up to two years after weight loss

This comes after research released last February suggested scientists may have uncovered why diets backfire.

Slimmers feel hungrier and have a stronger desire to eat up to two years after losing weight, a study found.

Among obese people who lose nearly 10 per cent of their body weight, their ‘thermostats reset’ to increase the impulse to eat, which the researchers believe may once have been an evolutionary advantage to protect against famine.

For people carrying too much weight, ‘hunger hormones’ may be harder to ignore as they become ‘deaf’ to signals that they are full, the scientists add.

The researchers, from the Norwegian University of Science and Technology, wrote: ‘Patients with severe obesity will, therefore, have to deal with increased hunger in the long term.’