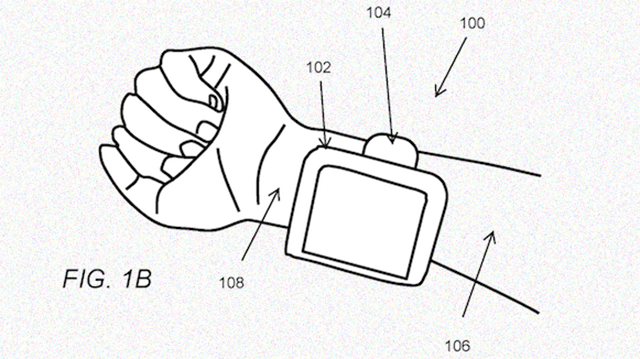 A patent application filed by Apple, for a (possibly Bluetooth-connected) wearable blood pressure monitor, became public last week and was brought to light by The Verge.

The application is interesting for how uninteresting it is: though it's very broad, what it describes seems to be a slight tweak on the standard-of-care inflatable blood pressure cuff, built into a wearable that might be smaller, might be connected, and might sport a touchscreen.

Patents and patent applications are best taken with a grain of salt, especially for a company with the resources of Apple. Many companies operate on a better-safe-than-sorry mentality and many technology patents never see the light of day as commercial products.

But this patent is still interesting for a couple of reasons. For one thing, Apple CEO Tim Cook has said in the past that he's not interested in FDA-cleared devices, that was prior to Apple's involvement in the FDA Pre-Cert program. The possibility of fast-tracking devices could change Apple's calculus on whether it's worth it to venture into FDA-cleared hardware.

For another thing, this is at least the third Apple patent that's come to light that deals specifically with blood pressure, which suggests it's an area the company has at least a passing interest in. Last August, Apple was granted a patent for a technique for detecting blood pressure index using the front-facing camera, the ambient light sensor, the proximity sensor, or a special electrode built into the device. In October, another patent application came to light, this one using wrist-worn accelerometer and photo-plethysmogram sensors to calculate a blood pressure value from the pulse transit time.

The news comes after a week of Apple announcements at the company's annual developer gathering, WWDC. While healthcare didn't take center stage at the conference, there was still a good deal of news trickling out.