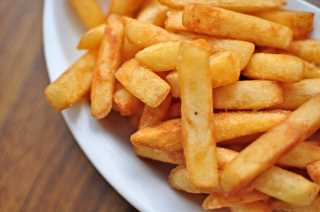 Parents of picker eaters gasped a collective OMG recently when they read this very scary news: A 17-year-old boy went blind because of his “fussy eating” — a diet that consisted of mostly white bread, French fries, potato chips, sausage and processed ham. So here’s what we all want to know: When is picky eating harmless and when is it a health hazard?

The boy, whose case was reported in the journal Annals of Internal Medicine, began complaining of tiredness to his doctor at age 14. Blood tests showed that he had anemia and low levels of vitamin B12. By age 17, his eyesight declined to 20/200, which is considered legally blind, according to Live Science. At that point, he still had low levels of vitamin 12 and was also deficient in copper, selenium and vitamin D.

“In the developed world, this is insanely rare,” says Danelle Fisher, MD, FAAP, pediatrician and vice chair of pediatrics at Providence Saint John’s Health Center in Santa Monica, CA. “I see picky eaters in my practice every single day. I’ve been practicing for 18 years, and I have never seen this type of severe malnutrition.” She adds that this type of complication from nutritional deficiencies is definitely more common in places where healthy foods are scarce or inaccessible, however.

It’s also important to know that this boy had a severe aversion to certain textures of food, and was eventually referred to mental health services for an eating disorder.

Picky eating is most common in toddlers, says Fisher, since that’s the age kids like to assert their independence by causing struggles. “Most grow out of it,” she says. But if your child is still young or hasn’t gotten over their food struggles yet, there are some things you can do to combat picky eating and help your child get proper nutrition:

And while picky eating isn’t usually something to be concerned about, this story should inspire parents to always look out for red flags in their kids’ eating behaviors. The teen boy was average weight, so it may have not been apparent that his diet was a problem.

“It is really important to look at what kids are eating,” says Fisher. “If mom or dad are making two separate dinners every night, that’s a red flag. That can happen every once in a while but should not be happening on a daily basis.”

She adds, “Parents should also realize they should be checking in with their teens about their eating habits and not just when they’re small children.”