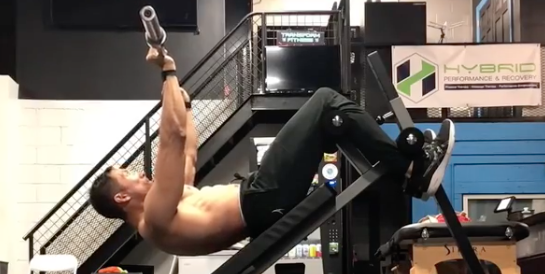 Your ab circuits might be missing a major component. You can train your core with bodyweight moves like planks and holds all you like — but to really push your six-pack to the next level, you should add some weighted resistance.

Men’s Health Fitness Director Ebenezer Samuel, C.S.C.S., uses a barbell to make his core work even harder during this decline situp circuit. The situp has been derided by some fitness authorities of late, but Samuel insists that the move can still be super effective — especially with the added weight.

“Situps and spinal flexion get a bad rap in the fitness world today,” he says. “Newsflash: One of the functions of your abdominals is to — wait for it — flex your spine. If we train that smartly, it’s still a great way to build a six-pack.”

To perform the series, you’ll need a decline bench and a barbell. Don’t just grab the nearest 45-pound bar handy, however; Samuel says that you’ll need less weight than you might expect. “Even a 20 [pound bar] will slay most people if you’re really owning that hold position,” he says, noting that he filmed the series using a 25-pound bar himself. If you struggle getting lighter weight up or don’t have access to smaller barbells, just use your body weight and keep your hands directly over your shoulders throughout the series.

Samuel says that your abs get work from both the situps and the bracing that comes during the hold position, which is another key function of your core. “The regular bracing in this will help you keep your situp form clean, reinforcing in your mind that your core must stay tight,” he says. “We’re also adding load to the equation to really carve depth and shape into our abs.”

Add this burner to your workout as a core finisher by doing 3 total sets of the series, with about a minute between each set.