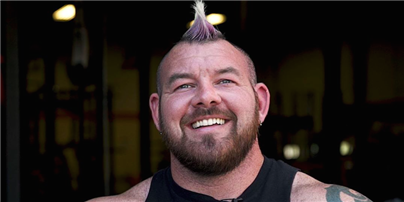 Powerlifter Rob Kearney might be an increasingly familiar face on the strongman competition circuit, but before he entered the world of strength sports, he was flexing his muscles by lifting whole human beings. During an interview on The Joe Rogan Experience, Kearney explained how as a teenager, he first put his strength to use by joining the cheerleading squad.

“Even in high school, I was throwing girls up in the air by myself and catching them overhead,” he said, stressing the athleticism required in cheerleading, which hinges on strength and accuracy . “The timing, coordination, it’s crazy,” he added. “It takes a lot of balls.”

Kearney actually intended to pursue cheerleading at a collegiate level, but his lack of agility was an issue: tumbling was a minimum requirement, and he was, as he puts it, “a little too chunky” to be pulling off successful backflips.

His subsequent transition to powerlifting in 2009 happened entirely by chance.

“I was working out in my high school weight room one day after school, and a substitute teacher happened to walk by, who owned a CrossFit gym. And he was like, hey, you seem to like this stuff, feel free to come by,” he said. “I started training with him at 5 o’clock in the morning before school. I found out really quickly I sucked at CrossFit, but I liked lifting heavy shit.”

After just four or five months of training, Kearney participated in his first strongman competition. “I got my ass kicked, took last place,” he said. “The contest went horribly for me, but I absolutely fell in love with the sport.” He joined the powerlifting team in college, where he honed his technique, and started competing on the amateur circuit.

Kearney came out in 2014, and regularly posts gym photos with his husband under the Instagram handle World’s Strongest Gay. And while he is currently the only openly gay man at his level in the field of strength sports, he told Rogan that none of his fellow strongmen have ever had an issue with his sexuality.

“When I came out it was super cool, nobody ever gave me any shit,” he said. “The community of strongmen is awesome because we all realize what we have to do to get to this level of the sport. We all have to be a little sick and twisted in the head to look at a truck and get excited to pull it. So yeah, when I came out nobody really gave a shit, they were like, alright, as long as you can still lift weights, we don’t care.”