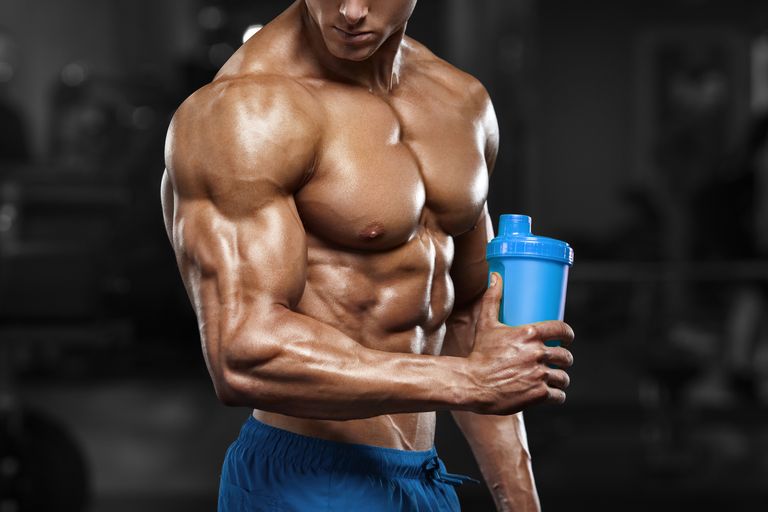 Starting out a brand new workout plan and diet to change the way your body looks can be tough, especially if you’re not on either end of the spectrum of what’s considered to be conventionally under or overweight. You don’t know whether to start by bulking up or losing the extra weight you have; you’re stuck in between.

Some people call that middle ground “skinny-fat.” That’s not an inaccurate descriptor, technically — but what the term is really referencing is just the standard body type of an everyday, average guy. If you don’t eat particularly healthy, but you’re not binging, and if you don’t have a dedicated training routine, but you’re not totally sedentary, it’s not surprising that your body type doesn’t fall into either extreme. Genetics obviously play some role here, but diet and exercise have a big part in how you look, too.

So, how do you go about building muscle when you’re starting point is somewhere in the middle? What’s your strategy?

Conventional wisdom says you have to choose: Either cut the fat and get even skinnier, or build muscle that remains buried under layers of fat. Bulk and then cut, or cut and then bulk.

But for the “skinny-fat” guy who’s ready to commit to a serious lifting and diet overhaul, it’s possible to do both simultaneously. Alan Aragon, my coauthor on The Lean Muscle Diet, calls it “culking.” The reason is simple: The guy stuck in the middle ground is a target-rich environment in both directions. “He’s nowhere near his genetic limits for fat loss or muscle gains,” Aragon says. “He has the fat to lose as well as the muscle to gain.”

Aragon believes it’s possible to shed three to five pounds of fat a month while gaining a pound or two of muscle. Here’s how to pull it off.

When I see inexperienced, underdeveloped guys in the gym, they typically follow one of these two strategies:

That’s anecdotal, of course. But I’ve been working out in commercial or corporate gyms since 1980, so I’ve got a lot of anecdotes. What I’ve rarely seen a novice lifter do is focus on primary movement patterns — squats, deadlifts, presses, rows, pullups and chinups. These exercises use the most muscle and develop the most total-body strength.

More important, primary movement patterns improve your body from the inside out, strengthening bones and thickening connective tissues as muscle mass increases. Those structural fortifications are the key to substantial, impressive, and sustainable muscle growth.

Add these exercises to your training plan, but don’t just do a few squats and call it a day. The best way to initiate hypertrophy, the cellular process responsible for muscle growth, is by performing two or three sets of an exercise for six to 12 repetitions, with about 30 to 60 seconds’ rest between sets. Construct your routine using these principles to get the most out of your time in the gym.

It’s tempting to cut calories when you want to lose fat. But food is your ally when you culk, for three good reasons:

1. Food gives you energy to train hard, and to recover from your workouts.

3. Eating speeds up your metabolism more than not eating.

You can’t underestimate the power of number 3. Digesting the food you eat accounts for 10 percent of your daily metabolism. With a higher-protein diet (up to 1 gram of protein per pound of your target body weight), that number should jump up higher than 10 percent. Moreover, the combination of eating and training increases your energy flux, a measure of calories going in and out. The more muscle you have, the harder you train, and the more you eat, the higher your energy flux.

So how many calories is “plenty”? Here’s a simplified version of the plan Aragon explains in detail in The Lean Muscle Diet:

Let’s say your target body weight is 175 pounds, and that you plan to work out hard for three hours a week. We’re going to multiply that target weight by the sum of two multipliers: 12 (indicating a guy with a relatively fast metabolism) and 3 (for three hours of training). 175 x 15 = 2625. That’s how many calories you’ll try to eat each day.

The number may be more or less than you’re eating now. Either way, there’s a lot of it, which you’ll need for a successful culk.

The numbers I threw out are an abstraction, since they don’t tell you what to eat, or when. “Getting wrapped up in the numbers is less important than staying consistent with the program,” Aragon says. “These targets are guidelines, not gospel.”

What doesn’t work is what you’ve already done: random meals at random times, with random workout programs you started but never used long enough to see results. That lack of design is how you got stuck in the middle. A successful culk requires that you give yourself some basic rules to follow:

1. Choose a serious strength-training program and stick with it. Muscle is your best weapon against fat, but you can’t use what you haven’t yet built.

3. Give yourself some slack: a small daily indulgence, or a couple of bigger ones each week. As long as 80 to 90 percent of your total calories come from whole or minimally processed foods — what you think of as “healthy” choices — you can get away with having a little fun with the balance.

It’s easy to be consistent when you’re getting fast, visually satisfying results. But it’s much harder to stick with the program when the results slow down. That’s when you begin to understand why so few people pull off a successful culk: they quit too soon.

“Remember that progress is progress, and you’re looking at the long haul,” Aragon advises. Over time, every pound of muscle you add gives you a bigger hammer to smash whatever fat remains. The farther you get from the middle, and the closer you’ll get to your goals, and the more sense it all makes.

Lou Schuler is an award-winning journalist and the author, with Alan Aragon, of The Lean Muscle Diet.