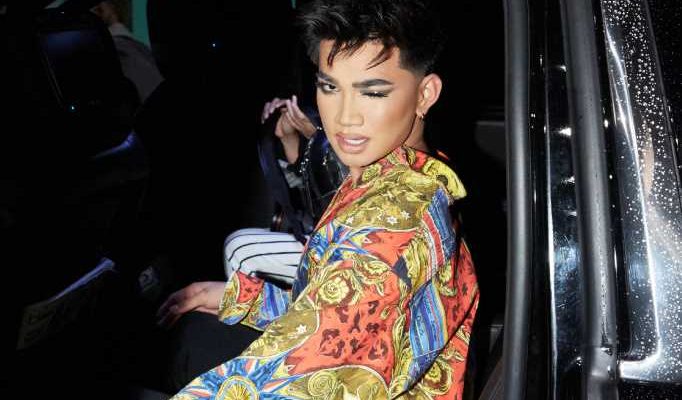 Bretman Rock thinks his hotel room is haunted.
This is perhaps part of the reason he rarely leaves Hawaii, though for New York Fashion Week, he made an exception. The 21-year-old YouTube sensation, who has 6.5 million subscribers, made his fashion week debut this season, attending the Jeremy Scott, Christian Siriano, Brandon Maxwell and Sies Marjan shows.
"The show is so quick, I felt like I blinked and it's done," said Rock from his hotel room in the Financial District on Friday evening. Moments before, he and celebrity makeup artist Kristofer Buckle, who counts Mariah Carey and Blake Lively as clients, were debating whether or not to add gold glitter to his eye makeup look. To some, it's a trivial decision, but for Rock, it's an important one: he feels all eyes are on him this week.
"I don't mean to sound popular or anything, but I feel like everyone's looking at me at the shows," he said. "I feel I always have to be cute. I honestly like it a lot."
Rock's presence at fashion week exemplifies a larger shift in the industry toward Internet culture. Photographer Renell Medrano, who counts 297,000 followers on Instagram, opened fashion week with a wildly popular party for her photo series "Peluca." Internet personality Rickey Thompson and "Euphoria" star Barbie Ferreira were among the VIPs at Coach, and influencers continue to be the most prominent street style stars.
In May, influencers, including James Charles, Lilly Singh, Liza Koshy and Camila Coelho, solidified their place among fashion's elite when they attended the Met Gala. Rock wasn't invited, which upset him, as he and his peers view the event as a rite of passage to true stardom.
"I’m mad I didn’t get invited to be honest with you, but I’m glad that influencers or YouTubers are being invited to such things," said Rock. "It’s a really big step in the social life ‘cause we are, I guess, celebrities, too. That sounds so, ugh, to say. Everyone that’s important, that’s really important, that’s super important is . I feel like that’s crossing the bridge between influencer and celebrity, and to be honest, I don’t really see myself as an influencer. I’m a celebrity in my head, truly."
Rock did, however, attend Vanity Fair's best-dressed party last week, where, he claimed, models asked him for photos.
"I was texting my boyfriend the whole time, like, 'dude, I feel so broke being here.' But at the same time, I belong," he said. The one model that did phase him, he said, was Adriana Lima.
"I saw Adriana Lima yesterday, but I didn’t want to make a fool of myself," he said. "I’ve always been a fan of Miss Adriana. I know all of her runway walks from Victoria’s Secret, to be exact. She really made that thing."
Post-fashion week, he'll leave "the mainland" to return to Hawaii and his usual content grind. He's working on "elevating" his Instagram Stories and preparing for a series of projects he has in the works for 2020, including trying to land a spot on a reality television show.
"I don’t want to be a self-proclaimed reality star, I want to be a reality star that is a reality star," he said. "As far as my brand goes, staying consistent and being true to myself and definitely staying home and away because I cannot see myself in . I’m over mainland in general. At home , people leave me alone. I like being online because people don’t say to my face, they say it to me online through their phone. And I don’t read my comments."
More from WWD.com:
Bretman Rock: Confessions of a YouTube Drama King
Are Influencers Now Part of Fashion's Elite?
YouTubers Discuss VidCon, State of YouTube Culture
Watch Bretman Rock take WWD crystal shopping in the video below.
Source: Read Full Article